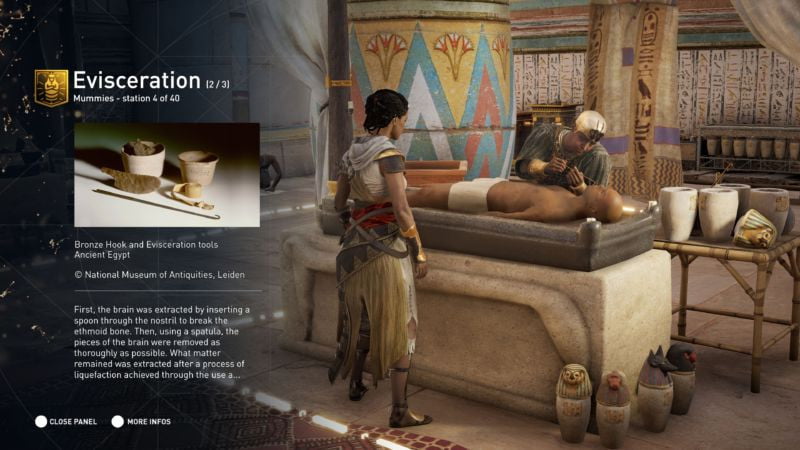 After a few bad years, things are sounding positive about Assassin’s Creed: Origins, and the news just keeps getting better.

One of the best bits about the Assassin’s Creed games is the digital tourism. Yes, there are daggers hidden in your coat sleeves and you’re murdering Templars because reasons, but they’re not always the best games.

While the worlds Ubisoft creates are always stellar, the open world conceits that go with them are less accomplished. From ropey combat to repetitive quests, via the stupid lather, rinse and repeat of climbing towers and jumping into haystacks, the assassin bits are actually the worst parts of an Assassin’s Creed video game.

Well, almost: the modern story elements and the bloody Animus mechanism are the real villains of the piece.

But what if you got a chance to enjoy those sumptuous, historical worlds, without any of that pretence of it being a video game? Ubisoft has your back folks, with the upcoming Assassin’s Creed: Origins educational mode.

Assassin’s Creed: Origins‘ educational mode – essentially a combat-free, open world walking tour – won’t be available when the game launches next month. It’s expected to arrive as free DLC in quarter one of 2018.

When it does, you’ll be able to explore ancient Egypt unfettered by any traditional video game design nonsense. Ubisoft themselves describe it as a “combat-free living museum, with guided tours that let players delve into its history firsthand” and do you know what? That sounds absolutely perfect.

Parents and children, teachers and students, and anyone else with even a passing interest in history – or just chilling out in another time and place – will find something to love in Assassin’s Creed: Origins‘ educational mode.

We reckon it’s probably the best thing that’s ever happened to the series.