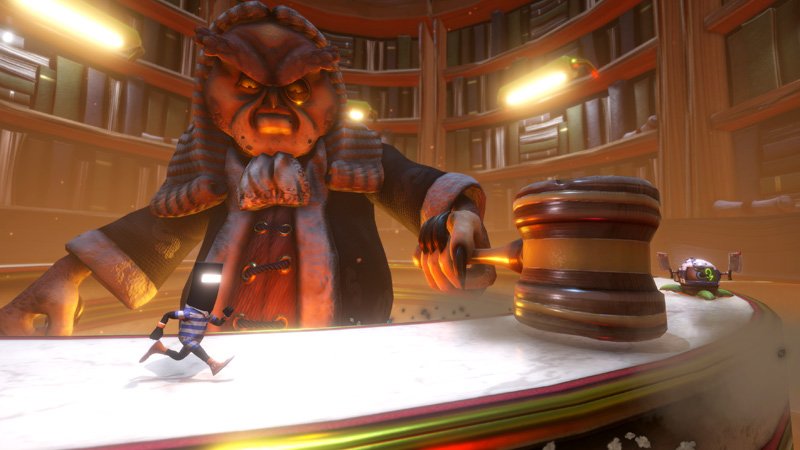 We caught up with Alex Neuse, co-founder of Choice Provisions, to talk about the release of Runner3, the genesis of the auto-runner genre, and asking Charles Martinet to “say rude things as Mario”.

Thumbsticks: With Runner3 you’ve turned the dial to 11. Aesthetically, you are in spectacular new territory, and it’s a far cry from earlier games in the series. Did you take this approach to push yourselves as developers, and would a game of this scope have been possible back in 2009?

Alex: I’m glad you noticed! With each game, we try to do something new, and highlighting our wacky sense of humor and goofy aesthetic was a prime focus of Runner3. Even in our most serious moments of Runner3, we wanted the game to be silly and joyful. For us, back in 2009, this kind of scope would never have been possible. At that time, we were but three human men with ambitious ideas. These days, we have a bigger team, so we can push ourselves further.

The auto-runner genre is significantly more crowded now compared to when the first Bit.Trip Runner was released. How has you kept the formula fresh?

Since Runner was among the first auto-running platformers (arguably the first, if you don’t count Baby Boomer for the NES), we try to nudge the genre with each new iteration. In Runner3, we’ve added more depth to the world, NPC characters who stop you in your tracks, vehicles, warp portals, a free-movement platforming retro game-within-a-game, and more. So, among auto-running platformers, I think we have a very well-rounded experience with Runner3.

Music is always an essential component of your games, but with the increased scope – both visually, and in gameplay –  is it harder to integrate?

Music remains an essential component of the Runner series for us, and yes, in Runner3, it was harder to integrate. In Runner3, we allowed our composer, the ever-talented Matthew Harwood, to make the music as complex as he wanted. That meant that we had to accommodate key changes throughout the levels. To do this, we had to do some special engineering to make sure that all the sound effects would jive with the music, and not clash. In terms of gameplay, you are going to be much better at the game if you do your moves in sync with the music. Let the tempo of the music guide you, and you’ll have an easier time with the game.

With such a wide variety of levels and styles, how did you brief Harwood this time around?

Honestly, we’ve been working together for so long now (12 wonderful years), that he’s basically in our collective brainrealm, and doesn’t need much direction. We certainly would share some visuals with him, and send along some video as he doesn’t work on site with us, but with the mere mention of ‘Foodland’, ‘Spookyland’, and ‘Machineland’, solely as concepts, he had the first drafts of their aural landscape 80% nailed. From that point on, it’s just fine tuning – more piccolos, sillier, fewer farts (if you can believe that), etc.

You call the Retro Challenges of Runner3 – which look beautiful – a game-within-a-game. Were you tempted to spin them off into their own title, or do they also help in the pacing of Runner3 as a whole

Thank you! And both. Allowing CommanderVideo to move anywhere on-screen was an important step for us. As we continue with the CommanderVideo series, we want to gently break out of always having him auto-run. This is us dipping our toes into a more traditional CommanderVideo adventure that might happen in the future.

Durng development you have been very open in sharing design ideas, sketches. Do you take fan feedback on board during development?

You know, we sometimes do. In fact, for each game in the series, we held some small contests with our fans to help us come up with graffiti, level names, and environment dressing. We like interacting with our fans, and find that they have some very nice ideas.

How do you feel in that long gap between certification and release? Do you find yourself wishing you could go back and change things? Are you impatient or nervous about the release and critical response?

I hate the waiting game. We finished the game in January. Because we’re doing a physical release this time, manufacturing timeframes sort of dictate the release date, and we just have to wait. I think all of us wish we could keep tinkering on the game; and in fact, there’s been a bit of noodling for a future update.

Runner3 is coming to multiple platforms, but PC and Switch first. I think there’s always been a Nintendo-like purity to your work; are there any games that have proved particularly influential?

We’ve always led with our Nintendo platform release, and I think that’s because to us, our games feel most at home within their ecosphere. One thing that sticks with me is the way I think of Nintendo games. The word “colourful” comes to mind. We like making colourful games.

And regarding Nintendo’s influence on us, I think I’d have to go with the obvious choice, which is the Super Mario Bros. series. That series does such a wonderful job at taking the core gameplay that was developed for Super Mario Bros. and tweaking it only very slightly with each sequential iteration. And now, 30 years later, Mario can basically do anything. But without those baby steps along the way, I don’t think we’d be where we are now. We take that to heart with each entry in the Runner series, and so far, I think it’s been working well for us.

Runner3 has another Nintendo connection, with Charles ‘Mario’ Martinet providing the voice of The Narrator. Was he always first choice, and what was it like to work with him? Basically, did you make him say rude things as Mario?

When we decided that we needed a narrator for Runner2, Charles was definitely at the top of our list. We’d known him for several years by that point (from trade shows and the like), so we figured we’d just have to make him an offer he couldn’t refuse. That offer was to say impossibly alliterated instances of insane interlocution alone. He’s an absolute dream to work with, and has wonderful ideas. Remember that brainrealm I mentioned before? Well he’s in it too. And we would never officially admit to asking him to say rude things as Mario.

We’re very proud of our other releases, which include those you mentioned, but also our Dave series (Woah Dave! and Space Dave!). Tharsis is an incredibly deep strategy game that tickles that board game itch that we sometimes get; and for the record, over 99% of Tharsis games are beatable. We did the research and we did the math. You can beat it every time you play it.

Laserlife is a calmer experience that allows players to reflect on one person’s life by discovering their memories in a trance-infused outer space alienscape. They’re very different games that live within the same universe. The astronaut in Laserlife is the astronaut that was ejected from the ship in Tharsis, in case you hadn’t made the connection. And the Dave series is basically our love letter to classic single-screen arcade games from our childhoods.

It’s very hard for us to market newer franchises, since The Bit.Trip and its continuing spin-offs are our bread and butter. It’s what we’re known for, so stepping out of that can definitely be a challenge.

CommanderVideo was deliberately conceived to be a blank slate for the player. Did you expect the character to have such longevity?

I’m not sure. I think that we realized we had something good, but I don’t know if we realized just how much CommanderVideo would resonate with people. We’re absolutely thrilled by the reception, and will most likely continue to make CommanderVideo games until we die.

And finally, caterpillar mounts. What gives?

I know. And that little dude was just having a rest too. Seems pretty rude.

Runner3 is available now on PC and Nintendo Switch.