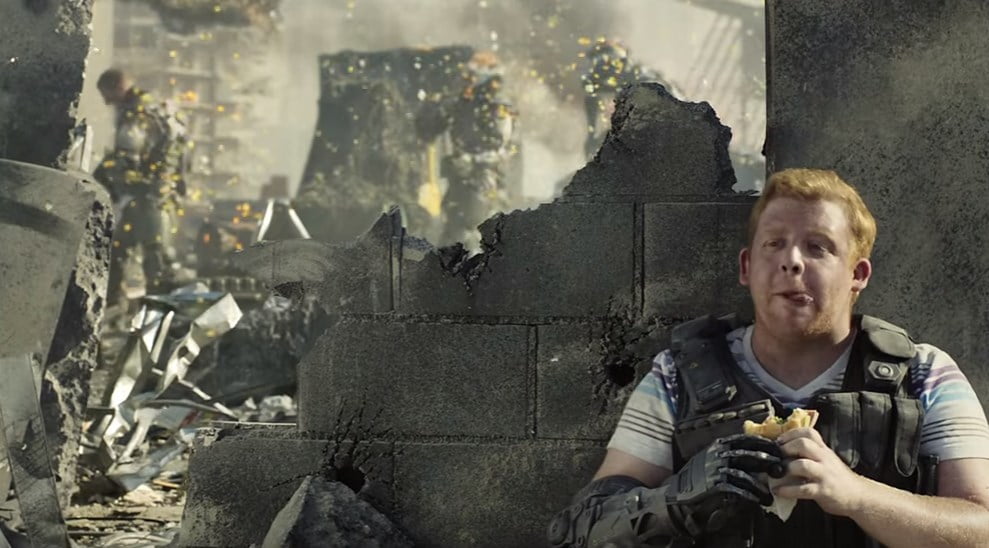 Whatever your personal opinion of the Call of Duty franchise, it’s hard to deny that they do make damn fine trailers – this one is no exception.

The formula for a modern trailer is a pretty familiar one at the moment. Take some epic rock music – be it classic, like the Rolling Stones of Led Zeppelin, or bombastic and modern like Muse – and then shove two minutes of action, explosions and cut-scenes down our throats as far as you’ll reach. Go on, get elbow-deep in there, cram it down as deep as you can. There you go! You made a trailer.

The new Call of Duty: Black Ops III live-action trailer opens with the familiar strains of the Stones’ Paint it Black (the de facto anthem of Call of Duty’s Black Ops series) and it seems like it’s going to be another cookie cutter, as per the above formula.

And then we meet Michael B. Jordan – the actor, not the basketball player; star of Creed and the much-maligned recent Fantastic Four reboot – standing atop a balcony watching the war-zone unfurl before him. And Michael introduces us to Kevin, the every-man hero of the piece. Kevin performs an amazing aerial take-down, he John Woo-slides with twin pistols, he wall runs, he rips off an android’s arm and beats it to death with it… and then he sits down and eats a sandwich in cover while the war rages behind him.

He’s just a normal bloke, and this is obviously another one of Activision’s “There’s a soldier in all of us” trailers.

Then we meet Beast Mode – that’s NFL star Marshawn Lynch of the Seattle Seahawks, for those of you who don’t know – and he’s surrounded. He ignites his flame-thrower and asks his onrushing opponents if they “want some Beast Mode” but before he can show us what a bad-ass he is, Kevin rushes in and saves the day.

Our hero single-handedly takes down a tank-droid with an explosive charge, then strolls off down the street, triumphant in his own magnificence… only to be thoroughly owned by model and actress Cara Delevingne, when then struts off down the street taking on all-comers.

It’s a nice touch. Activision have somehow managed to take their familiar ‘solider in all of us’ concept, and simultaneously glamorise it with celebrity appearances. Well played.