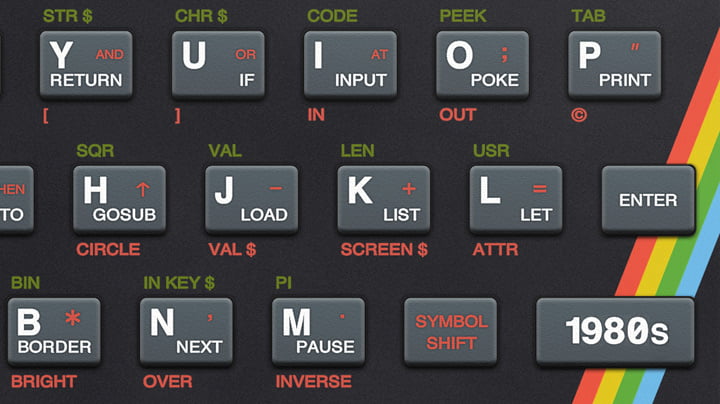 Of course, if you were a British kid in the 1980s you would never actually call them video games.

While our American and Japanese friends focused on the pleasures of console gaming, Britain had a very different ‘home computer’ games scene. It was a scene that involved cassette tapes, writing pages of code and pretending that graphics didn’t matter.

Here are ten things we miss about the golden age of computer gaming:

Forget Sega vs. Nintendo or PlayStation vs Xbox. In the UK it was all about ZX Spectrum vs. Commodore 64. Or, if you like, blocky graphics vs. anaemic graphics.

The one thing both camps had in common was a hatred — or rather, some sympathy — for the poor Amstrad CPC owner.

Long before the Nintendo Wii became synonymous with the term waggle, a million Kempston Cheetah 125+ joysticks bit the dust due to excessive throttling. The culprit was often Daley Thompson’s Decathlon or — in my home — its sequel, Daley Thompson ’88.

The Kemptson looked sturdy but it offered little resistance to the tantrum of a frustrated 11 year old.

Before digital downloads. Before Blu-ray and CD. Before disks and cartridges. There were cassette tapes.

Although a seven minute wait for a game to load was a real pain, it was offset by the fact you could, well, just pirate games by just copying them on a tape-to-tape cassette recorder. Every kid had two piles of cassettes in their bedroom; games they’d bought, and a stack of Maxells and TDKs that contained bootleg copies, complete with homemade cover art.

Colour clash — or more accurately, Attribute Clash — was something mostly enjoyed by ZX Spectrum owners. It was caused by the way the machine stored bitmap and colour information in separate areas of its memory. And although it was always used as a weapon in the platform war by Commodore 64 owners it became something of a badge of honour among Sinclair enthusiasts. The efforts of developers who could work within its constraints was always appreciated.

That said, trying to pick out the right team in Match Day 2 could be an absolute nightmare.

These days people are weirdly happy to pay hard-earned cash to unlock cheats and features in games under the guise of DLC. Back in the ‘80s it was possible to ‘hack the system’ by typing in reams of BASIC code before loading a game.

This ‘POKE’ could open a treasure chest of game-modifying delights. Unless you made a typo and the whole thing crashed, of course.

Budget games helped popularise home computer gaming in the ‘80s. Whilst ‘proper games’ could cost anywhere between £7 and £10, budget labels such as Mastertronic and Ricochet ensured that a steady stream of titles were available in local news agents for a paltry £1.99.

Rather than describe what it was like to wait for a Spectrum or Commodore game to load, just watch this video and marvel at how a few minutes can feel like an eternity.

’80s games had the BEST titles

We now live in an age where video games like to be taken way too seriously. Their titles are bland and seemingly pulled from a big bag of permitted words that result in names like Champions League of Heroes of the Eternity Storm: Revelation. (Coming in 2017, that one.)

It wasn’t always this way. Back in the ’80s you could play games with the oddest, maddest – and sometimes incredibly literal – titles imaginable. Our favourites include:

Try and tell me we weren’t the winners here.

The arcades were big in the ‘80s. Games like Gauntlet, Afterburner and Out Run were the staple of any day trip or after-school excursion.

Fortunately, some publishers — usually US Gold — decided to remake these hit games so we could play them at home. Unfortunately, we decided to buy them, too. There were some solid attempts — Domark’s Star Wars being a highlight— but they were mostly atrocious. The ZX Spectrum of Double Dragon was a famously bad conversion.

There was the odd treasure, however. US Gold’s home conversion of Out Run wasn’t great but there one excellent reason to buy it. Rather than trying to recreate the arcade game’s astonishing soundtrack, they just bundled the whole thing on a separate cassette tape. There’s nothing to beat the feeling of driving around east London in a Triumph Dolomite with Passing Breeze booming in the background.

As Star Wars proves, 1980’s home computers did see some fantastic movie adaptations. Along with Domark’s Star Wars trilogy there was also a the range of solid movie tie-ins from Ocean Software in the shape of The Untouchables, Batman: The Movie and RoboCop.

RoboCop was a particular favourite, especially as it featured some impressive digitised speech. Wait, is that ‘RoboCop’ or ‘Purple car’ you’re saying there, Murphy?

Let’s leave you with that speech and Jonathan Dunn’s glorious title music from the ZX Spectrum 128k version of the game.

What are your favourite memories of home computer gaming in the 1980s? Let us know.