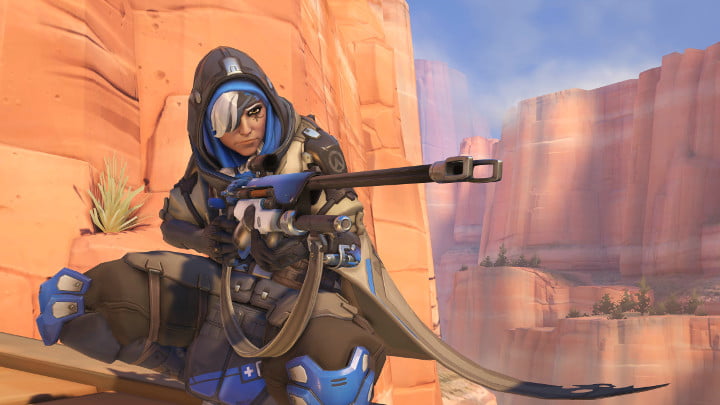 Overwatch has been surfing a wave of hype and popularity, but an online game’s longevity relies on updates. Here’s the first new Overwatch hero: Ana.

In their unerring commitment to larger-than-life characters and well thought-out back stories – for a game where everyone kicks lumps out of one another while 14-year olds scream obscenities about each other’s mothers – Blizzard are expected to trot out a number of new heroes over the next year or more. Ana, for what it’s worth, is a battle-scarred veteran and one of the founding members of the fictional organisation of Overwatch, but nobody cares about that; what they care about is that she’s possibly the coolest healer that we’ve seen in an online first-person shooter.

Why? Because Ana will shoot you back to health with her healing sniper rifle.

Overwatch’s Ana uses a syringe-shooting rifle called the Biotic Rifle – much like the syringer in Fallout 4 – to fire long-range darts that will both heal comrades and damage enemies. She’s also got some Biotic Grenades that operate in a similar binary fashion; there’s obviously some sort of genetic shenanigans going on in the Overwatch crew to make that sort of bio-targeting work. Ana’s ultimate ability, Nano Boost, transforms teammates into super soldiers, granting faster movement, increased damage, and resistance to enemy attacks.

Healer’s weapons are usually lame in comparison to massive guns so there’s no excuse not to play as Ana, with the added bonus of being able to heal your squad without getting your arse kicked, simply by being near the front-line and out of your depth in head-to-head terms.

The tables have turned.