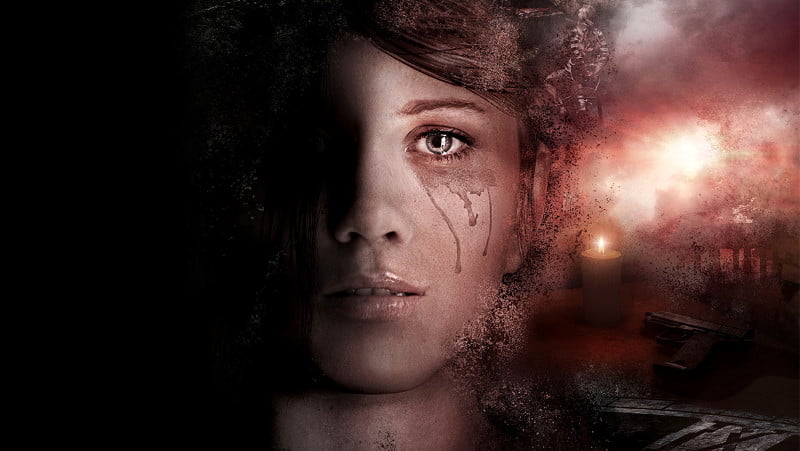 Get Even is a strange thing, a rough and ready mix of styles and influences, grim and unique; does it all come together to form a cohesive whole?

Editor’s note: Get Even was originally slated for release on May 26, 2017, but following the horrific terrorist bombing at an Ariana Grande concert in Manchester (and given some of the game’s themes, which sees a teenage girl attached to an explosive device) its release was postponed.

The Farm 51 has set out to make something you haven’t played before, and with publisher Bandai Namco putting the wind in its sails, it’s done just that. As such, Get Even doesn’t fit into any one category without its share of scuff marks. Walking simulator, puzzle game, first-person shooter, sometimes horror: it makes its home in the overlap, taking cues from Hollywood, and play styles from a jumble of sources. And it isn’t any one of these styles first.

You’ll poke around searching for clues, sleuthing past or picking off your enemies. In a move reminiscent of Condemned, you’ll use a variety of forensic tools to sift through the detritus of crime scenes: a UV torch, an evidence scanner, GPS replete with enemy vision cones – all rolled into a phone. You have the upper hand in combat – doing what it says on the tin, the corner gun turns every bend into a barrel of fish, and slows down the shooter stretches into sedate pot shot galleries.

It’s a bit of a chimera, then, but far from that being an omen of disaster, it pulls most of this off rather well. Iain Sharkey and Stephen Long (the writing partnership behind Derren Brown’s TV shows) were brought in to work on the game’s script – a tightly wound, well-told yarn, hot-footing its way from the likes of Source Code to Memento by way of Korean masterpiece Oldboy.

It sees Cole Black (yeah, I know) using the Pandora device (yeah, I know) to explore fragmented memories to figure out what on earth is going on. An amnesiac hero isn’t uncommon in video games or films, but here it double-helixes very nicely with the unfolding story and the way it plays. You won’t really have a clear picture of what’s going on in step with Cole – his realisations are yours. The emotional through-line is potent and the narrative is kitchen sink, its characters impeccably voiced with snarling English vim and moments of heart-rending warmth and pain.

Moreover, it’s nice to see what happens when good writing is married to ideas. Quite how a device as brimming with potential as The Animus has been fumbled for so long in Assassin’s Creed I’ll never know. In Get Even, you have something very similar explored in clever ways, and characters that dissect and develop along with the re-configuring narrative of memory and regret.

There are some cheeky references baked in as well: a newspaper article written by “Richard Bachman”, a flyer for a club night called Recall Night at the Lacuna Club, and a poster with the words “I am a psychopath” by Patricia Bateman. These are chuckle-inducing little nods that betray a geeky appreciation for source material well outside the usual gaming crop.

It isn’t often in games, or films for that matter, that you could reasonably say the score almost carries the day. Olivier Deriviere’s orchestral composition and sound design all around are phenomenal. Everything from establishing room tone, to fusing sound with play lifts Get Even a few notches higher, and it speaks to how vital a part of the experience of playing sound can be. At one point Cole’s frantic breathing speeds up to the beat of a pulsing piece of techno; at another, dizzying strings rise to a skin-crawling crescendo as you steal through the guts of an abandoned asylum.

It’s when you get down to the nitty-gritty of play that you snag yourself on some rough edges. It’s not an enticing place to be, for one. Get Even’s colour palette is the brown-grey murk of a painter’s water pot at the end of the day – all the colours running like dirty rainwater into the gutter. There is light in some levels, the sort of steely white-grey you tend to get in a November sky, or the harsh synthetic lighting of office interiors. It all rolls into one indistinct shell after another.

Every now and again you’ll catch sight of something sublime: the autumn sun, a cooling star, casting pale light on a gazebo slathered in graffiti. It’s a reminder that bleak can be beautiful, and doesn’t have to mean dull; sadly, it’s more often than not the latter here.

As for where you find yourself, Get Even makes its bed in all those desolate places you see slip by on motorways. Warehouses, power stations, breeze-block grey buildings rotting at the seams, wind whistling through windows like broken teeth. These are the kind of places we remember from Manhunt; only here, they’re brought to life with the assiduous magic of photogrammetry.

This technique – the conjuring power of which has been shown off in The Vanishing of Ethan Carter – allows smaller studios to bring achingly real environments to life that would be beyond them with traditional rendering. A laborious process, thousands of photos are taken from different angles to painstakingly scan environments into the game. The results are, at first glance, stunning.

Unfortunately, it’s performance that scuppers the payoff. It’s a real heart-breaker to be shuttered with a limp framerate. It breaks immersion when you feel as if you’re breaching and diving like a dolphin around the 30 frames per second line. It never judders to a halt – there’s never enough going on for that – but it’s blighted with perfusive slow-down. Getting up close to surfaces brings you face-to-face with some gruesome textures as well.

If you’re spotted, Get Even is quick to remind you that it isn’t a shooter. The distortion of gunfire and static crackle clutter the screen and clamour in the ears. It feels muffled, as if you’re wearing a motorbike helmet, your breath fogging the visor as you scramble for relief. It’s like the ragged handy cam movement in a Paul Greengrass film: emotionally effective, absolutely, but visually obstructive and – here at least – frustrating.

Likewise, some environments are pitch black, meaning you rely heavily on your UV light. This would be fine but its puny area of illumination means navigation can chafe. The GPS is good… maybe too good. I spent a lot of time abandoning the real world and just focusing on my phone. Perhaps that’s an incisive, satirical point, of art imitating life. Perhaps not.

This assortment of styles serves the story well: sleuthing makes sense in piecing together a damaged mind, and surges of snapping synaptic violence inject fear and danger into what you’re doing. But it seems as though they weren’t brought together in service of being fun to play. It’s remarkable how often and how far that can fall from priority lists.

But you know, I’m not sure that there isn’t a charm to these failings, in an odd way. There’s a rough-cut, lo-fi patina to Get Even that adorns its good ideas like graffiti. With its edges scuffed and its heart in the right place, it feels like that now endangered species: the AA release. Long live dirty, flawed experimentation. This one’s different.