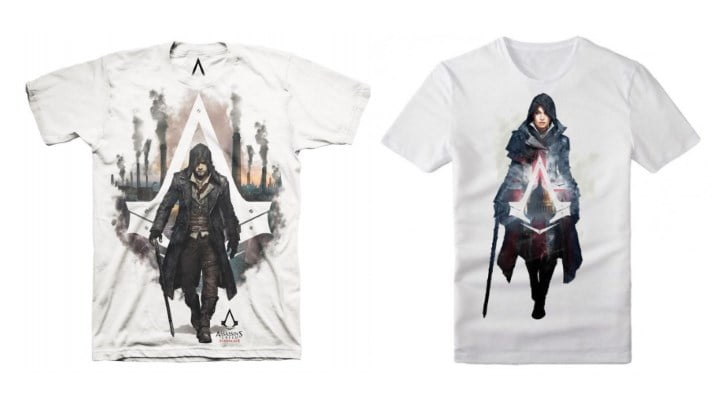 But why are there more Team Jacob than Team Evie?

When an Assassin’s Creed games come out, you usually get a raft of merchandise that aims to help fans look just like the characters in the game. There’s cuffs and bandanas and gauntlets and weapons… which is all kind of cool if you’re into cosplay – and some of the hoodies and messenger bags look damn smart in their own right – but often the Assassin’s Creed clobber a bit over-the-top and not entirely appropriate for everyday use.

Honestly, who really wants to be wearing a concealed blade gauntlet with actual working spring-loaded action – albeit with a harmless, plastic blade – on the London Underground? That sort of thing has the potential to get a budding assassin, er, assassinated by the British Transport Police.

Fear not, modern members of the brotherhood! There are some more subtle options out there, including a rather natty line of official Assassin’s Creed Syndicate t-shirts available:

You may notice there are far more official Assassin’s Creed Syndicate t-shirts featuring Jacob than his twin sister Evie. In fact it’s at least a 5:1 ratio (of the images where you can clearly see are one or the other) but it looks as though the hands holding the gauntlets are masculine too, which makes it 6:1 in favour of Jacob; the figure in the logo of the raven could be either.

Now before people start getting all angsty in the name of a certain wooden entryway, I’m absolutely not saying that the official Assassin’s Creed Syndicate t-shirts are a patriarchal conspiracy or that we need to call up Anita Sarkeesian on the Bat-phone immediately – they’re just t-shirts – but I do think it’s a shame that, in a game where a female protagonist is leant just as much weight as her brother, she’s sorely under-represented in the official merchandise.

Perhaps the equality memo didn’t make it to Ubisoft’s licensing and merchandise department?