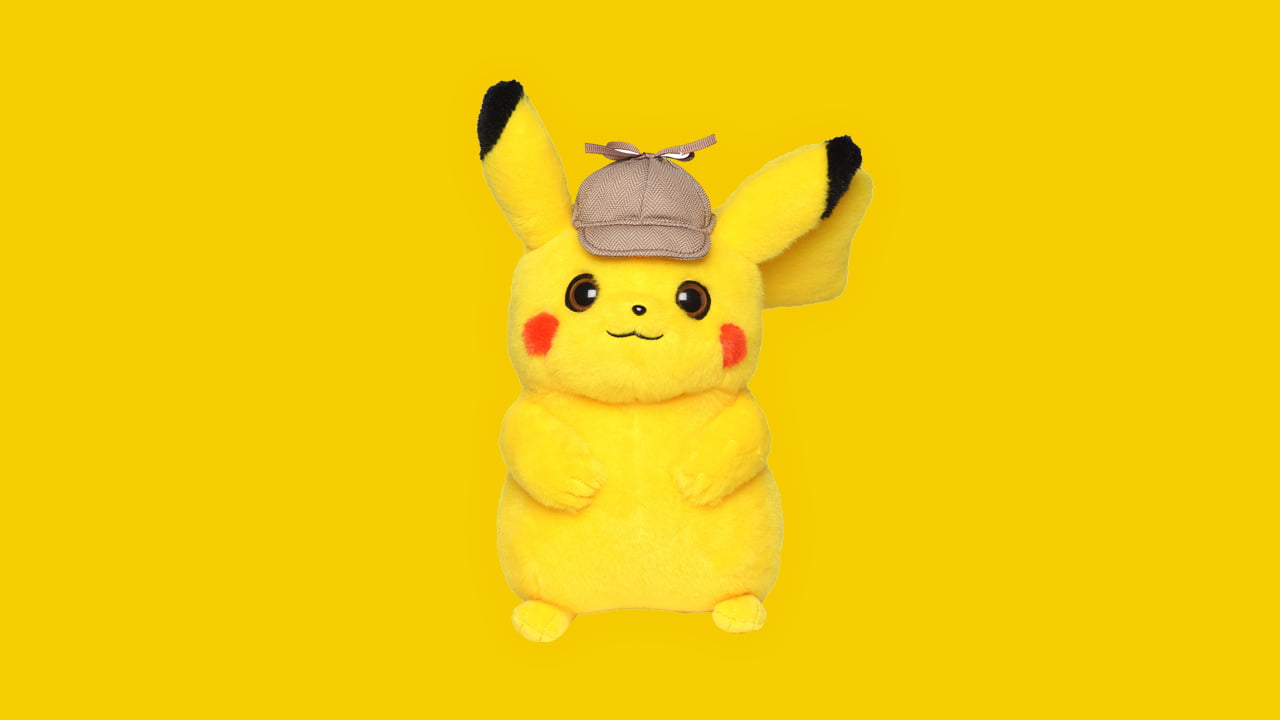 Pokémon Detective Pikachu is a certified box office hit and without doubt one of the best video game movies ever made. With that success comes merchandise. Here are some of our favourite officially licensed products.

We have to start with the most traditional piece of merchandise possible. There are Detective Pikachu plush toys available in a variety of sizes but our favourite is the official 8-inch edition.

A 16 inch version is also available that is to scale with the character’s movie appearance but it isn’t quite as cute. Just look at those darned eyes. The 8-inch version is also nicely priced, costing a reasonable $24.99 from the official Pokémon Center Store. The slightly disturbing Psyduck plush toy is also worth a look.

There are three Mega Blok sets available. The first is based on the Baker Detective Agency office and features a rather odd looking Pikachu. The second is a nice recreation of the Hi-Hat Cafe, complete with Ludicolo.

The best, however, is the fully articulated and poseable Mr. Mime figure. It’s available from Amazon and other toy retailers for around $20.00

Clothing retailer H&M has launched a line of Detective Pikachu clothes which range from the rather extravagant to the rather plain. The collection features T-shirts, dresses, leggings, and denim jackets. Our pick is this Patterned Cotton Shirt. It’s stylish but just discreet enough to wear in public. Actually, it’s not, but we’ll wear it anyway.

Although the collection is not particularly expensive, it’s currently only available in Asia, so take shipping costs into account before you order.

It’s easy to forget that the new Pokémon film is based – in part – on the video game of the same name. By all accounts Detective Pikachu on Nintendo 3DS wasn’t a huge hit, but it’s a charming adventure game that has a thematically similar story even if it doesn’t feature the likeness of Justice Smith, or the voice talents of Ryan Reynolds. Frankly, it’s baffling that a Nintendo Switch version hasn’t been released. The oversized Detective Pikachu amiibo is also a minor work of art.

The game is available from the Nintendo eShop and all major game retailers, including GameStop and Amazon. The amiibo is harder to find but available from some Amazon Marketplace sellers.

If you’re not watching or playing Detective Pikachu, there’s only one thing left to do. Be Detective Pikachu. This official Plush Ears Hat features the classic herringbone deerstalker – made famous by Sherlock Holmes – adorned with two distinctive yellow and black ears. One cute touch is a label stitched to the inside of the hat detailing Harry Goodman’s Ryme City address.

The Plush Ears Hat is also available from the Pokémon Center Store.

We may receive a small commission for purchases made from online stores.