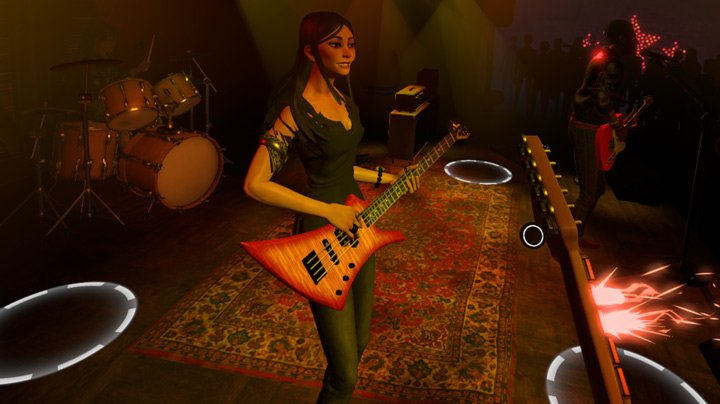 Harmonix have announced that Rock Band VR will be released on Oculus Rift on March 23, 2017.

Can VR give the music genre the boost it desperately needs? Harmonix Music Systems must hope so. The return of the Rock Band franchise has indeed been rocky, with flagging sales and a sense that the audience for guitar games has long-since hit the road.

Fortunately, the Rock Band experience itself is in very good shape. The new VR edition of the game builds on the work found in Rock Band 4 with two modes. The first is the traditional Classic Mode, complete with online leaderboards. The second is a new Performance Mode in which players can express themselves with different chords, notes and strum speeds to develop their own sound. It also means, we assume, that you don’t have to worry about hitting the right buttons on the controller.

Being in virtual reality also means the player will be right on top of the audience and can interact with band mates during songs.

Rock Band VR is launching with some decent tunes, too. Aerosmith’s Walk This Way, Paramore’s, Aint’ It Fun, and When You Were Young by The Killers, are among the 60 included tracks.

Here’s what you’ll need to play the game. Just mind your monitor when you strut that Stratocaster.

It all looks like jolly good fun and there wasn’t so much cabling, plastic and money involved, we could be tempted.