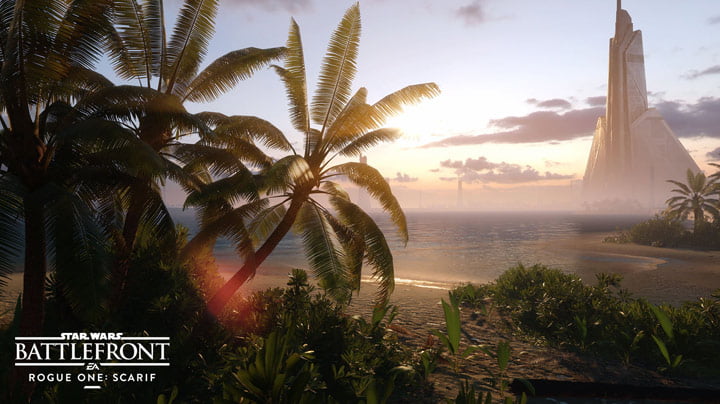 Star Wars Battlefront gets two new pieces of DLC to tie in with the upcoming movie, Rogue One: A Star Wars Story.

Are you looking forward to the new Star Wars film? Have you ever wanted to be in the film? Get ready to be immersed like never before, blah blah blah…

In all seriousness the new Star Wars Battlefront content is actually very good. For starters it proves two things: 1. New Star Wars content never really gets boring, and 2. If it does, chucking an AT-AT or two in the mix will usually fix the problem.

First up is Star Wars Battlefront‘s fourth and final expansion pack,  which has the snappy moniker of – deep breath – Star Wars Battlefront Rogue One: Scarif. The new pack completes a solid year of updates for the game that has added iconic locations such as the Death Star, Cloud City and Jabbas Palace, plus a range of new modes and items.

The new expansion adds Jyn Erso and Orson Krennic as two new playable ‘heroes’ and features locations from the forthcoming film, including the beaches and jungle of the planet Scarif. There’s also a new, multi-stage mode called Infiltration and a couple of new blasters to shoot first with.

Also available is the Rogue One: X-wing VR Mission. The add-on is available as a free download and is absolutely recommended if you have a PlayStation VR headset and the slightest interest in all things Jedi. The VR Mission is worth trying out just to see the mandatory but, nonetheless impressive, appearance of an AT-AT in virtual reality.

Want to join the Dark Side? Get Star Wars Battlefront on Amazon.