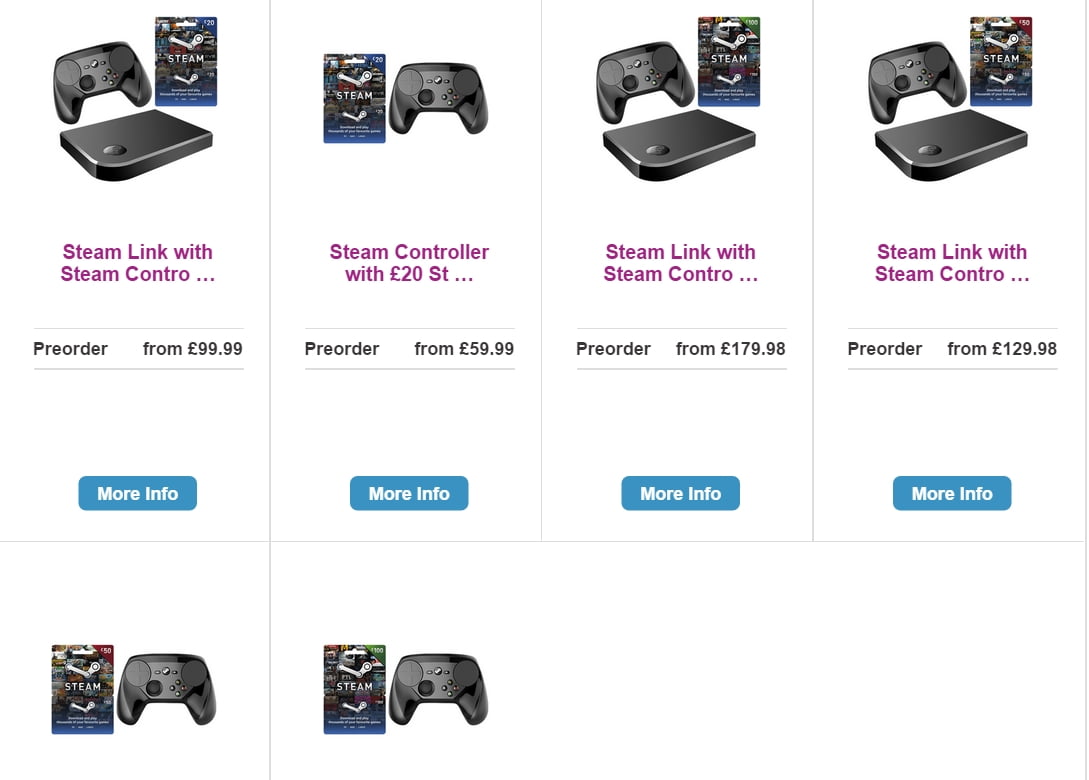 Valve’s heavily anticipated ‘haptic’ Steam Controller is available to pre-order now from GAME.co.uk. Something doesn’t seem quite right, though…

You know how when you buy a pay-as-you-go mobile phone, you have to buy a minimum £10 top-up to go with it, regardless of whether you want or need the credit? You might’ve been swimming in unused credit or just be wanting to buy a replacement handset to go with an existing SIM-only contract, but it is physically impossible to untether the purchase of the physical handset from the obligatory SIM card and top up voucher that go with it.

UK games retailer GAME.co.uk seem to have decided this is a brilliant business model, for some inexplicable reason, with their launch of the new Steam Controller (and Steam Link) hardware pre-order offers.

“That doesn’t seem so bad,” you might be thinking, “I was probably going to top up and spend on my Steam Wallet anyway at some point.”

That’s fair enough. You probably were. But the irritating thing is, there’s no appreciable discount for purchasing one of these “bundles” with your Steam Controller. A Steam Controller costs £39.99 and a Steam Link costs £39.99, and of course, the Steam Wallet top-up costs whatever the face value is.

You do not save a single penny over RRP for purchasing these things together. The Steam Wallet top-up becomes mandatory levy on purchasing any Valve hardware (the Steam Controller and/or the Steam Link) from Britain’s biggest gaming retailer.

“That’s OK though,” you’re convincing yourself, “because GAME say that if I order from them early enough I might get my Steam Controller on October 16 2015 – that’s nearly a whole month ahead of the November 10 release date!”

So if you want to pre-order a Steam Controller (or Steam Link) and you fancy being in with a shot of early delivery, then you could pick it up from GAME.co.uk – and you will of course receive GAME reward points – but if you’d rather not be forced to buy a Steam Wallet top-up you might not want or need (or you just object to the forced purchase in principle) then you’d probably be better going to Valve’s Steam Store direct.