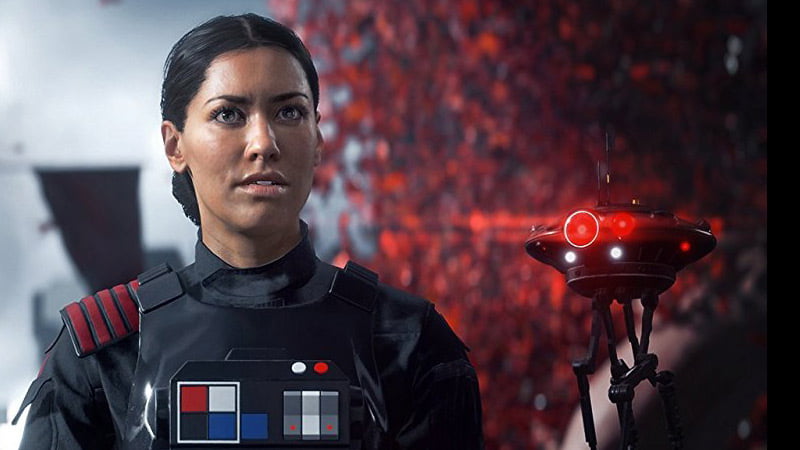 “We hear you loud and clear, so we’re turning off all in-game purchases. We will now spend more time listening, adjusting, balancing and tuning. This means that the option to purchase crystals in the game is now offline, and all progression will be earned through gameplay. The ability to purchase crystals in-game will become available at a later date, only after we’ve made changes to the game.”

As Polygon’s Allegra Frank astutely puts it, the pressure will have just as likely come from Disney, who will not entertain the thought of their marquee franchise being dogged by such controversy. The whole sorry saga also had an impact on EA’s share price.

So how does the game at the centre of the controversy stand up? One of Star Wars Battlefront II‘s big additions is its single-player campaign. In terms of gameplay, the campaign has been well received, but there are mixed responses to its story.

“To say that Battlefront II’s campaign has a story would be generous. Instead, it has a series of moments with the barest relation. The spotlight quickly moves off Iden, resolving her internal conflict with little fanfare to focus on iconic heroes and a far more traditional good versus evil storyline. Star Wars finds strength in its broad, mythic narratives but the shift here feels ill considered.”

The core of the game remains its multiplayer, which USGamer‘s Kat Bailey enjoyed, with some caveats:

“Star Wars Battlefront 2 is one of the most enjoyable multiplayer games of 2017, especially if you like Star Wars. It’s also more flawed than it should be. Battlefront 2 doesn’t deserve to be wholly defined by loot boxes, but it’s inescapable given the impact they have on some of the core modes.”

And Martin Robinson at Eurogamer finds the game to be inconsistent, just like its source material:

“Star Wars Battlefront 2 is ultimately as maddening and uneven as the films themselves, and just as likely to wow you with a moment of unparalleled spectacle as it is to fall flat on its face. Such is the way with this series, where the Force is always kept in balance in some mysterious way; for every Boba Fett there is a Watto, for every Battle of Hoth a Dex’s Diner.”

PUBG‘s 1.0 update has added some significant new features to the moderately popular shooty game. Vaulting and climbing are the headline additions, as well as ballistic air drag, and sniper scope tweaks. Our own Tom Baines spent an evening testing the changes so you don’t have to. Here are 7 things we learned in the PUBG climbing and vaulting test.

In other PlayerUnknown’s Battlegrounds news, new images have been released of the upcoming desert map.

During this week’s Destiny 2 Curse of Osiris DLC livestream, Bungie said it will add new content to the Leviathan Raid as part of a new feature called the ‘Raid Lair’. The lair also includes a new set of encounters, and a new final boss for players to conquer. The Raid Lair will launch shortly after the release of the Curse of Osiris expansion, which drops on December 5, 2017 on all platforms. The livestream also showed off the new planet of Mercury, plus the revamped Lighthouse.

Resurgent Nintendo took home the hardware and software honours in October’s NPD report. Super Mario Odyssey was the month’s best-selling physical release, despite only being on sale for four days of the month. On the hardware front, the Nintendo Switch was the best-selling hardware, followed by the Super NES Classic.

Despite Nintendo’s success – and strong performances from Assassin’s Creed Origins, and Middle-earth: Shadow of War, which was the overall top-selling game when digital sales are accounted for – the industry saw total sales drop by 11% to $825 million.

The Wall Street Journal reports that Nintendo and Universal Pictures’ Illumination Entertainment are closing to inking a deal to produce an animated Super Mario Bros movie. According to the story, Nintendo legend Shigeru Miyamoto will have a production role, and the film is likely to be made by Illumination’s Paris studio.

THQ Nordic has purchased Swedish games studio Experiment 101. The studio is currently working on the wonderfully named, open world RPG, Biomutant. The Biotmutant IP is also included in the acquisition, which is for an undisclosed sum.

Organisers of the Game Developers Conference have announced that the first GDC Film Festival will take place at next year’s event. The festival will be open to all GDC badge holders, and will take place at the Yerba Buena Center for the Arts. Film submissions are open from now until December 15, 2017, and can be submitted here.

It has also been confirmed that Naughty Dog’s Josh Scherr will deliver a talk at GDC’s Narrative Summit on character development in Uncharted: Lost Legacy.

The PlayStation and Xbox Black Friday promotions are in full swing, for playing members at least. If you subscribe to Xbox Live Gold or PlayStation Plus you can relieve yourself of some coin by enjoying early access to the PlayStation Store sale and Xbox Digital Games Store sale.

Skyrim was released again this week, this time in teeny-tiny portable Switch form, and in constitution-testing virtual reality on PlayStation 4. Both editions have impressed in their own ways, with Heather Alexandra detailing her VR experience, and Edwin Evans-Thirlwell revisiting the game on PC to discover its secret smallness.