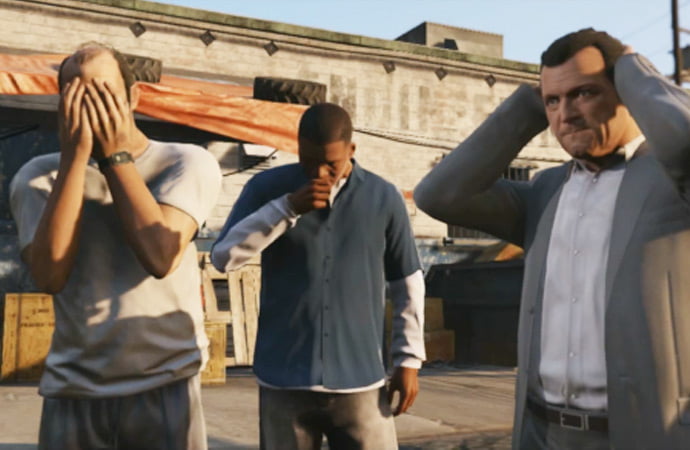 We take you on a tour of some of our favourite fast, funny and downright freaky elements of GTA V.

1. Badasses don’t look at explosions (but sometimes they probably should).

2. Motocross races in GTA V go down pretty much exactly the same as in real life.

3. Sometimes things are just such a perfect fit, it would be rude not to.

5. Boys don’t grow out of their toys, the toys just get bigger. Case in point, here’s domino rally, with cars:

6. Mimes are just plain annoying, even in GTA V.

7. You’re never quite as athletic in reality as you are in your mind.

8. And the gates in GTA V are really, really well put together.

9. Thinking outside the box is encouraged in GTA V. Obeying the laws of physics is optional.

10. It’s easy to bite off more than you can chew when planning stunts.

11. And sometimes a stranger just likes to mess them up. Because, you know, reasons.

12. But every once in a while, they go exactly as planned.

17. And now for something completely different.

19. Especially when a friendly game of leapfrog goes horribly wrong.

20. Even the seagulls are aggro in GTA V.

21. And the GTA V cows are freaking insane.

22. But craziest of all, people like to get Trevor naked.

25. Seriously, why do you all like getting Trevor naked? He’s not even doing anything in this one! What is the matter with you?

26. But for all his mental health issues, and apparent aversion to clothes, Trevor’s still a badass.

27. And he definitely doesn’t look at explosions.

Pick up GTA V from Amazon.