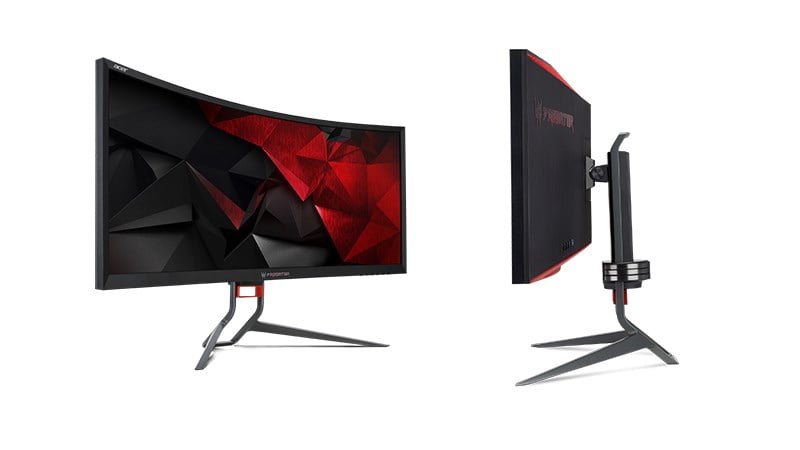 First things first, let’s address the elephant in the room: the Acer Predator Z35P is enormous, heavy, and extremely expensive. Kind of like an elephant, actually.

To put that in a little context, here’s the Predator Z35P standing next to my 43″ Sony telly, a 960mm wide unit in a more standard flat panel/16:9 widescreen configuration, and also a banana for scale:

That all seems like a lot, but to be fair to Acer, you do get a lot of monitor included in the – also stupidly massive – box.

It also features dual stereo speakers – a relative rarity for PC screens – that receive audio input via HDMI, and a USB connector to allow it to function as a powered USB 3.0 hub. With built-in speakers and availability of powered USB ports, there is perhaps an argument to be made for considering the Acer Predator Z35P as a television as well as a monitor – just add a Chromecast and you’re away – but at a grand’s worth of hardware, it’s probably not worth it.

You can pick up a similarly-sized (albeit not 21:9 or ultrawide) smart TV for half the price of the Predator Z35P (plus another 10% if you go curved) and you really won’t miss the ultrawide display in anything but gaming. We tried 4K Netflix on it and it was either stretched or had vertical black bars, for example.

But when you are gaming on the Predator Z35P, in all its 21:9, ultrawide glory? It’s pretty special, provided you’ve got a graphics card that can keep up with it.

That native 3440×1440 21:9 resolution is a spectacular party piece, particularly if you’re sat bang in the sweet spot in the centre of the curve. The brightness and contrast are superb, and the extra width does a remarkable job of drawing you into games, particularly ones that really make meaningful use of the extra screen real estate like Elite: Dangerous. That being said, the viewing angles are surprisingly good for a curved screen, somewhere these panels often fall down. That’s especially important if you’re going to be sharing this screen with others for watching movies and the like.

If you’re gaming with something that’s less capable of driving the Acer Predator Z35P to its full capability however – like the GTX 1050-equipped laptop we’ll be reviewing shortly – you might find the screen ratio to be more of a nuisance than a benefit, particularly on modern titles. Sure, I was fine pushing older or less-demanding titles like Half-Life 2 and The Long Dark at 4K through that meagre GPU, but more intensive games like Gears of War 4 or PUBG were a real struggle.

If your graphics card can’t handle the native resolution, there are simply no 21:9 screen ratios that we can find both the monitor and Nvidia’s settings are entirely comfortable with. More often than not, you’ll find yourself making some sort of compromise, either:

That’s possibly a bit of a moot point, though. Most people who are even remotely considering dropping a grand on a monitor the size of Luxembourg probably aren’t scrimping with a GTX 1050 (or lower) in their primary gaming PC. More likely, you’re going to be pairing this with something like an Nvidia GTX 1080 or AMD RX Vega 64, and if you do – and you’ve got enough room on your desk, and you don’t mind that it looks a bit like one of the Transformers – you’ll really appreciate what it can do.

Also, imagine how many columns you’ll be able to have on the screen in one Excel spreadsheet!

Manufacturer: Acer
Availability: Out now – Shop for the Acer Predator Z35P on Amazon (we may receive a commission for purchases made through third-party retail stores)

The Acer Predator Z35P monitor is superb (and the score reflects that) but it’s really not for everyone. Unless you’ve got the graphics card to drive it, cash to burn to buy it, and an enormous, console-like desk on which to use it? You’re probably not the target audience.

Basically Acer have designed a monitor with Bruce Wayne and Tony Stark in mind, and in its own way, that’s actually pretty cool.