Like tyre tracks in the desert, Mad Max made a shallow imprint on the gaming market before dissolving into obscurity.

Its big screen cousin Fury Road revelled in blockbuster earnings and Oscar glory, but Avalanche Studios’ open-world adventure received a lukewarm response, with critics calling the game “repetitive” and “a shallow, forgettable experience.” While perhaps imperfect, Mad Max also shines with artistic reverence for the post-apocalyptic lore of writer/director George Miller, from the evocatively barren landscapes, to the brashly modified cars. In that devout spirit, it seems, Avalanche Studios created Chumbucket, a character who quite literally worships the mythology of Max Rockatansky – enough to shun the spotlight as the game’s true hero.

During the game’s opening sequence, Max is ambushed by a legion of scavengers who take his clothes, equipment, and iconic black car. Left to die in the desert, he stumbles across Chumbucket, a gnarled, nattering mechanic who fervently greets Max as a messiah figure, denoting him “Saint” in a demented religion pieced together from burnt scraps of Judeo-Christian theology, and the Wasteland’s pervasive automotive culture. “Valve allows the life inside, the other gives birth, struck ablaze by godly plug igniter,” Chumbucket shouts upon meeting Max. “Revolution about revolution, rejoice!”

Chumbucket’s religion centres on a feminine deity called the Angel Combustion, and prophesises that Max was delivered to help create the Magnum Opus, a “divinely inspired” vehicle that he has spent a lifetime obsessing over. His hidden workshop, which Chumbucket calls his tabernacle, is filled with crude iconography in worship of “the Angel made steel,” blending primitive cave drawings with complex blueprints. Hissing at the “infidels” and “sinners” that cross their path and impede their “holy mission,” Chumbucket obsequiously bends to the will of the gruff and indifferent Max, painting himself as a “lowly acolyte.”

Just as the Wasteland around them is littered with the detritus of catastrophic war, Chumbucket’s body tells the story of a civilisation in ruin. He is badly scarred and branded, bearing layer upon layer of the ugly violence that has beset humanity. His nose has been broken, most of his hair burned away, one of his eyes clouded over with a cataract. Chumbucket’s severe hunchback, meanwhile, puts him in a position of constant physical subjugation. Little wonder, then, that he has passionately crafted a personal faith around the Angel Combustion.

It is natural for humans to find solace in religion during an extreme crisis, after all. Researchers have noted a phenomenon, termed the Religious Comfort Model, whereby “religious faith becomes more appealing after reminders of tragic suffering, danger, randomness and death.” This particularly applies in times of great distress, such as major disasters or terrorist attacks, where the spiritual guidance of religious leaders can help affected people with “stabilization, normalization and adaptation, as well as with processing what has happened and with making meaning of the experience.” For Chumbucket, the Angel Combustion isn’t simply a madman’s fantasy – she represents a ghostly semblance of order in a world torn apart by chaos.

While Chumbucket eagerly inserts Max into his religion, latching onto him as a sign of hope amongst so much pain and devastation, their relationship extends beyond a messiah/disciple dynamic. As they travel the Wasteland in search of parts for the Magnum Opus, they are united as a duo that evokes the male partnerships of classic westerns like Butch Cassidy and the Sundance Kid and Rio Bravo – in fact, George Miller acknowledges the Mad Max series is “basically a western on wheels.” Although video game Max repeatedly declares “I travel alone,” that simply isn’t true – unlike John Marsden in Red Dead Redemption, whose partnerships are fleeting and circumstantial, Max is inextricably bound to Chumbucket’s engineering skillset. They may seek different ends – vengeance on one hand, prophetic closure on the other – but their unique destructive/creative abilities merge into a potent partnership to confront the Wasteland’s wild expanses and feral inhabitants.

But beneath its veneer of hyper-masculinity and rock-solid male companionship, The Guardian notes how the western genre “literally throbs with latent homoeroticism.” In a critical reading of The Wild Bunch, for example, Stephen Prince argues the film follows a recurring genre subtext of “a gay utopia where the male libido is unfettered, and takes directions both destructive and liberatory.” In accepting Mad Max as a dystopian twist on the western formula, then, it also becomes necessary to peel off further layers in Max and Chumbucket’s relationship. 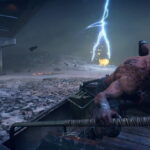 In the world of Mad Max, Robert Oscar Lopez observes, women serve only as breeding tools for male warriors: “The men of this warrior ruling class derive all their ecstasy from the company of muscular young males eager to labor and soldier for each other and for their male patrons.” In that regard, Chumbucket’s reverence for Max goes deeper than his desperate need for a social connection or spiritual solace, and veers into romantic infatuation. Chumbucket is besotted with Max’s “saintly wheel hands” and “otherworldly skills,” grovelling and pandering to his volatile temperament. His servile manner evokes a dominant/submissive relationship, which is noted by a warlord when they seek refuge in his stronghold: Max is warned to “keep the deviant [Chumbucket] leashed. Don’t need any of his perversions on my ship.”

Max avoids reciprocating his companion’s fondness, but it’s as much an act of repression as it is stoicism. His reticence symbolises an internal struggle to reconcile the ghosts of his past, to move on from the murder of his wife and child during the fall of civilisation, and fill that emotional gap with the shards of humanity that remain. He is torn between the heteronormative family unit of the old world, and the homoerotic companionship of the new.

During his quest, Max forms an ambiguous relationship with a concubine named Hope, and saves her daughter from slavery. Hope tells Max “we were meant to be together,” and that he should “Stay with us. Make a life.” But he literally pushes her away, choosing instead to pursue Chumbucket who, in a fit of jealous insecurity, flees with the Magnum Opus back to its “birthplace,” his workshop. Chumbucket has been viciously tortured when Max finds him, and joyously whispers, “Saint, you came for me!”

The information Chumbucket provides while being tortured leads to the murder of Hope and her daughter – the elimination of the competition, in other words, because Chumbucket is the crux of another surrogate family for Max, a doting maternal figure who fusses over the wellbeing of his partner and their baby, the Magnum Opus. From the car’s conception in his workshop, through its evolution into an increasingly powerful killing machine, Chumbucket virtually never leaves the car, and frets helplessly whenever Max sets out on a mission by foot. Katherine Biber notes how the Mad Max series “[fuses] the vehicular and the corporeal,” which amplifies Chumbucket’s link with the Magnum Opus even further, causing him to wail “She’s in pain!” whenever the car is damaged. The connection to his creation is so strong, the family he has built with Max so beloved, that Chumbucket stubbornly stays latched to the car during its final suicidal mission over the edge of a cliff.

Whether Chumbucket represents faith, friendship, fetishism, or family – or perhaps all at once – he is a critically important companion for Max. He helps Max in a time of vulnerable desperation, gives him a purposeful path to follow, facilitates connections with the Wasteland’s power brokers, and ensures Max is equipped to handle the arduous journey. Without Chumbucket, there could be no quest for vengeance – and perhaps no Max at all. The game may bear Max’s name, but the broken and scarred Chumbucket is the real driver behind his glory.

The complexity of Chumbucket underscores why Mad Max is a remarkable video game that deserves to be revisited. In mechanical terms, the game closely follows a well-established sandbox formula, which no doubt contributed to the commercial shrug it received. But beneath the button-mashing combat and drip-feed map expansion, Avalanche Studios have lovingly crafted a nuanced character study, exploring themes of love, faith, male companionship, and repression. Far from being derivative and shallow, Mad Max is a radical experiment in the action-adventure genre.