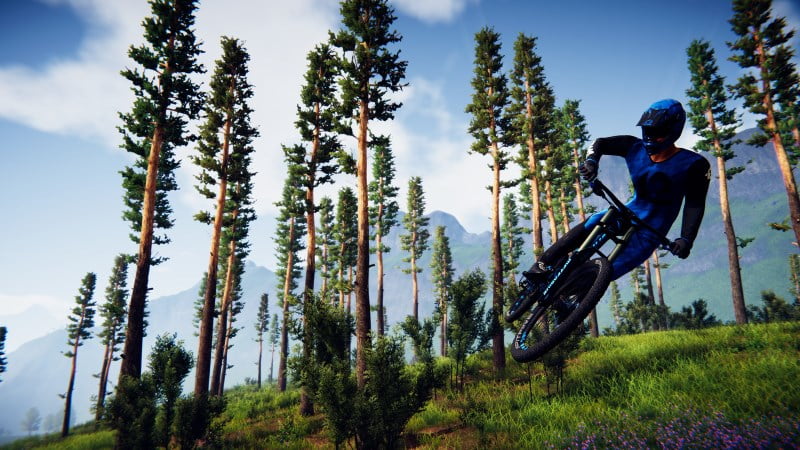 But rather than a mobile affair, this is a PC game, available from Steam (in Early Access). Nor is it visually simplistic, like other procedural games. Far from the voxels of Crossy Road or the beautiful flat 2D of Alto’s Adventure, or the cheap pixels of Flappy Bird – Descenders is a realistic 3D game built in Unity, and when it’s running at a lick, it’s gorgeous. It’s not free, or ad supported, or only costs a couple of quid, either; it costs the best part of twenty of the Queen’s Sterling.

It’s also not actually endless, like most games of this type. Where as you’ll snowboard forever – at least, until you crash out – in Alto’s Adventure, Descenders is split into environments and stages. That does mean there’s technically an endless stream of curves and ramps to smash your teeth on, but each course is separated by checkpoints, and the environments are fenced behind bosses, of sorts.

Allow me to explain the flow of Descenders.

After a brief tutorial on the game’s – wonderful, smooth, simple – controls, you’re dropped into a course at the top of the Highlands environment. The course, procedurally generated, has been configured with a balanced setup; that’s a fairly even mix of curves, steepness, and things upon which to perform stunts.

If you get to the bottom, you’ll move onto the next stage. Each environment is split into stages, and you’ll have branching choices of which stage to tackle next – with varying, randomised setups of curves, steepness and stunts – as you make your way across the board to the final boss stage.

Crash out, and you’ll effectively lose a life. Lose all your lives, and it’s session over. (You’ll also lose reputation, but we’ll come back to that later.) However if you perform the optional objective for the stage – get to the bottom without braking, perform three backflips, spend more than five seconds in the air, that sort of thing – you’ll gain an extra life.

And here’s where the procedural nature of Descenders starts to cause a few wobbles.

Other than the mandatory first (and final) stage of an environment, you’ll be shown what the next optional objective is before you select a stage from the available branching options. This means if your next objective is for backflips, for example, then you’ll want to pick one with a high stunt rating. If you need to get to the bottom in 35 seconds, then you’ll definitely need to pick something steep… though I wouldn’t entirely recommend trying that.

Some of the objectives are, I’ll plant my flag here, flat-out impossible on certain courses. Even on the steepest run, literally eschewing the track and careening a straight line down the middle of the hill, I’ve yet to beat a course in under 40 seconds, never mind 35. Some are technically doable – like reaching the bottom without braking, or the more difficult corollary, without letting up on pedalling – but I wouldn’t recommend it. Having to achieve a set number of tricks on a course without any jumps, in spite of an apparently high stunt rating on the course selection screen, is just irritating.

If you crash part-way down a run, you’ll lose all your progress towards the bonus objective. Not only will you lose a life, you’ll also probably lose your chance of earning a replacement. You can very quickly end up throwing good lives after bad.

There’s an old adage regarding golf course design, about balancing risk with reward for a challenging experience, but because lives are limited and you need plenty to progress, you’ll achieve more in Descenders by playing carefully.

You can, for example, achieve the five seconds of airtime objective by squeezing the brakes and doing tiny bunny hops all the way down the hill. You can complete a run without braking by snaking tiny little slalom turns all the way down, so you never pick up any speed. It’s not exactly in the spirit of an extreme sport, but sometimes absolutely necessary if you want to progress. You might find yourself nursing one remaining life with the brakes on full, basically walking the bike down the hill.

Not only is it less exciting to play this way, the environments in Descenders – complete with billboard grass and frequently recurring assets – look a lot less pretty when they’re not whipping past you at speed, the way they’re intended.

That feeling, that sometimes the game’s own nature is working against it, runs through Descenders. There are some stunt types – like a wooden loop-de-loop, or jumping between the legs of a Firewatch-style tower – that you’ll probably just ride around and ignore entirely. The bonus you’ll get to your reputation by doing more risky stunts isn’t really worth the pitfall of losing another life.

And you’ll need those lives when you get to the boss stage at the end of the environment.

In the highland environment, that’s jumping over a viaduct with a moving train on it, which – with a hint of depth of field and screen shake – looks and feels amazing. It’s genuinely thrilling. In the forest environment you’ll jump onto, then off the other side of, a particularly large Firewatch tower. The canyon environment boss is, erm, a big canyon? And the peaks boss is jumping off the side of a mountain, onto a ramp that’s being suspended from a helicopter, and then onto the next mountain. It’s ludicrous, but adds a terrifying extra dimension to the game’s procedural courses.

Is it stupid? Yes, but very exciting and challenging, so you’re definitely going to need to stock those precious lives for the boss jump. To further gate onward progress, you need to complete each environment (including the dizzying boss jump) three times from the beginning, before you’re granted a new checkpoint and are allowed to start a session at the subsequent environment, with a full complement of lives. It’s a balance of procedural freshness and roguelite grind that doesn’t always work.

You can have a wild time performing stunts while you’re doing it, and the procedural nature of the stages means it’s a new game every time, but the constant nag of the health meter really cramps your style. Between the limited lives and the challenges to progress, tricks and stunts are often the furthest thing from your mind.

What you do get for performing wicked stunts is a boost to reputation, and cosmetic items. It’s scant reward. I gained enough reputation to increase my rank several times, and I was invited to join a team, but I’m not entirely sure what any of that means in practical terms. (Yes, I know you get team-specific gear and access to your team’s channel on Discord, but honestly, who cares?) There are limited-time challenges in the menu, but I’ve seen none available thus far. Presumably this is because Descenders is still in Early Access, and – as well as fine-tuning and balance to the game’s procedural algorithms – there’s more to come in terms of content.

Even the game’s free practice mode, usually a chance to go wild in extreme sports games, still carries the conceit of a health meter. You won’t suffer a loss in rep if you bail, but you can’t even get away from limited lives to perform the most insane of stunts, just for fun. I’m desperately hoping for some sort of freeride or trick attack mode to make its way into the game through the course of Early Access, because if (like me) you were hoping for a bit of classic Tony Hawk’s Pro Skater or Skate, just on a mountain bike, you’ll likely be disappointed to some degree.

Finally – and I know this is a matter of petty personal taste, but while we’re talking about classic extreme sports games – if you were expecting the lively pop-punk of Tony Hawk’s, or the eclectic mix of hip hop and rock of EA’s Skate, you’re going to be even more disappointed. Descenders features a repetitive mix of dismal, borderline-unlistenable drum and bass.

And that was it. That was where the review was going to finish, until Mike Rose of No More Robots, publisher of Descenders, hit send on this tweet:

To which we made the following enquiry:

haha well, I would say this news definitely addresses a big question mark that people have had about the game

So we waited. We didn’t publish the review. And it turns out, Rose was right. The update definitely does address a big question mark people have with the game, and one we raised in our review: where the hell is a freeride mode?

But now that freeride is here, does it materially change the review? Not so much, as it happens.

Freeride mode in Descenders is, by and large, exactly the same as playing a single stage in the main game. The difference is that you’re allowed to make modifiers to the parameters of the stage before you start. You can adjust the three sliders – curves, steepness, stunts – to try and get a stage more to your liking, but the nature of the game’s procedural generation means you still might not get what you want. It’s just more likely.

You can pick your environment, and time of day, and even put on custom modifiers like the removal of the path from the centre of the course. All of this makes for interesting diversions to the standard setup, but its fairly immaterial.

Most importantly, you can modify the number of lives you have before you start in freeride. If you want to keep going over and over, without hitting a “rekt” game over screen, you can. That gives you the opportunity to take on the big tricks you daren’t risk during the game proper’s roguelite quest for progression, and to keep bailing and dusting yourself off and trying again, but honestly? It doesn’t make as much difference to my enjoyment as I thought it would.

At the heart of Descenders is undoubtedly a very pretty and – under the right procedural circumstances – mechanically fun-to-play mountain biking game. Unfortunately the whims of procedural generation and the contrivances of its roguelite progression system tend to dampen the exhilaration and enjoyment somewhat. However if developer RageSquid can make the most of Early Access and add some additional game modes, or adjust the balance to favour extroversion and tricks over caution and staying power, they could be onto a real winner.

Oh, and some variety in the soundtrack (or maybe Spotify integration, so you can listen to your own playlists?) would be lovely, thanks.