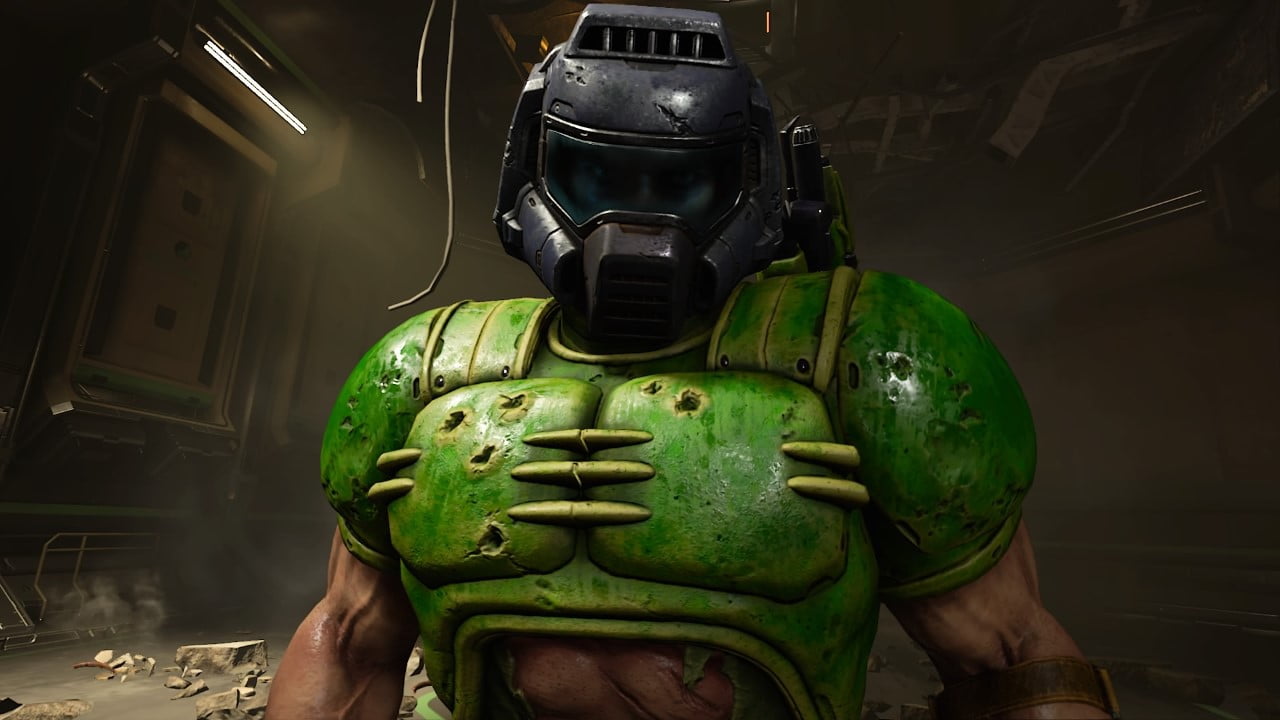 Doom Eternal? More like… no, actually, “eternal” pretty much covers it.

At the beginning of the Doom (2016) reboot, Doomguy wakes up in a tomb. He’s being prodded and poked by demons, which he’s obviously a bit miffed about, so he smashes their faces in. He grabs a pistol, shotgun, and his bottle-green armour, then sets off for the surface of Mars. All of this happens without breaking first person, just like Half-Life. It’s immersive and brutal and rattles along at one hell of a clip.

A voice – Dr Samuel Hayden, head science bloke of the UAC – speaks to him over an intercom. He tries to explain what’s going on. Why it’s happening. How it’s (sort of, mostly) his fault.

But Doomguy has no interest in Hayden’s mea culpa. Incensed by the presumptuousness of such unnecessary exposition, he smashes the intercom with his fist. The opening credits roll, he cocks his shotgun in time to the rising metal soundtrack, and we’re underway.

That is, in short, the smartest move Doom has ever made as a series. Doomguy really doesn’t care what’s going on or why it’s happening, and I’m going to let you in on a little secret here: neither do we. None of us could possibly care less about the “plot”, such as it is. The reason doesn’t matter. He’s here – we’re here – to rip and tear demons into little pieces of demon confetti. That’s all.

It’s disappointing, then, that Doom Eternal is absolutely chock-full of cutscenes and needless exposition. We see Doomguy animated in third-person! He has actual conversations! Nobody will shut up for a second! You can’t move without a hell priest, or a demon goddess, or some other pantomime villain soliloquising about prophecies and McGuffins and their destiny to wipe out the human race.

Doom Eternal was never going to be a narrative masterpiece. It’s about demons emerging from Mars and overrunning the Earth, and the gruff bloke who kills them all singlehandedly. It’s nonsense on stilts. But while you’re barreling through it at breakneck speed you don’t notice just how dumb it all is. When the game goes to great lengths to explain every last detail, however, to lampshade its own abject stupidity, you realise just how big those stilts are.

It’s generally just dreadful, but that’s not to say it doesn’t have the odd, ridiculous highlight. Doomguy’s intercom-punching brusqueness still rubs up against the exposition overload in amusing ways, while seeing human characters cower in his presence is never not hilarious. (And it’s also nice that, for older fans the series, some NPCs in Doom Eternal actually refer to him as Doomguy and not the far more pretentious modern invention, the Doom Slayer. You can even unlock the original game’s armour, complete with exposed abs from demon tears.)

At one point, he needs to get his ass to the centre of Mars – because reasons – but there’s no path down there. While other characters are discussing the options, or lack thereof, Doomguy silently brings up an image of an orbital BFG-10000 defence cannon on the magic space GPS system of his weird spaceship. (Yes, he has a base hub now. You need to unlock it, a room at a time, over the course of the game. It’s tedious busywork, but at least it features a nice little gallery of your collectables, in addition to that retro armour.)

“You can’t just blow a hole in the surface of Mars,” protests an NPC.

Undeterred, Doomguy punches in the coordinates, brings up a portal, grabs a plasma rifle, then goes and blows a hole in the centre of Mars. He’s a man of his word. A man of action. Thankfully, action is what Doom Eternal excels at.

Mechanically, Doom Eternal is as potent and satisfying as the series has ever been. The movement is slick, the weapons fierce, the action intense. In addition to the core item drop tactics of the 2016 reboot – use the Chainsaw on demons if you’re low on ammo; Glory Kill them if you’re low on health – you can use some new abilities to manage the fight. The Blood Punch allows you to convert potential energy from Glory Kills into a devastating haymaker. The Flame Belch, a shoulder-mounted flamethrower, causes enemies to drop shards of armour while they’re ablaze. The Ice Bomb freezes enemies solid, which means they’re stationary, they take additional damage, and there’s a chance they’ll smash into pieces. (Think Terminator 2’s liquid nitrogen scene or the Winter Blast plasmid from BioShock.)

Doom’s retro sensibilities, with pickups for health and armour, are key. It just wouldn’t work with the glowing red screen/hide behind a wall damage regeneration mechanics of other, more modern first-person shooters. Doom Eternal frequently throws you into gladiatorial arenas – from confined pits to expansive, vertiginous theatres – where you have to survive wave after wave of demons with limited resources. Sometimes a totem will enrage and empower demons until you destroy it. Occasionally, there’ll be an enormous boss demon to contend with. If you don’t learn to master the ebb and flow of the action, the extraction of health, armour and ammunition from your enemies, you won’t survive. It means you’re frequently on the cusp of death, and only well-timed, last-ditch glory kills will keep you in the fight.

It’s also a technical marvel. You’d never call Doom Eternal “beautiful” – some of the levels look more like a colonoscopy video than a game – but it’s visually impressive all the same. The gore nests and demonic temples make for ridiculous, reductive caricature, but the human facilities, the space stations and military bases and former shopping malls, show off just how impressive Id’s engine can be. Even on a base PS4, it’s fluid and slick. The lighting in particular, with nuclear-green tones signposting the path forward, really shines in the darkness.

(It’s also refreshing that the ubiquitous “lighting slider” doesn’t encourage you to make the game as dim as possible. Doom Eternal’s prodigious use of HDR makes a potentially very gloomy game sparkle. That the PC version doesn’t support real-time ray tracing is a surprise, though, given Id’s penchant for the cutting edge.)

Mick Gordon’s soundtrack is another consistent highlight. It’s an expansive build on his work in Doom (2016) featuring bigger soundscapes, arrangements, and a heavy metal choir. To use metal as a metaphor, which feels appropriate for Doom Eternal, it’s like Metallica progressing from 1986’s Master of Puppets – raw, untamed, seething – to their glorious 1999 live album with the San Francisco Symphony.

To extend that metaphor to the game itself is to expose the cracks in Doom Eternal, however. It’s bigger in scope, more expansive in range, and drenched with polish. And that makes it so much worse than the game that precedes it, somehow? It’s a pompous and self-important peacock of a game, a grandiose pantomime production under a thin veneer of heavy metal.

It all just feels antithetical to the core of the series, to the brilliant resurgence of the 2016 reboot. The worst criticism I can give of Doom Eternal is that it feels just that – eternal. It feels like it goes on forever. And not in a good way. Where once levels lasted 15-30 minutes, here, they can last several hours. They’re rampant and repetitive – even the perma-tense combat feels formulaic after a while – and all punctuated by a combination of tedious roadblocks, unlocks, and that ever-present, abysmal storytelling.

Doom Eternal is twice as long as the 2016 reboot and it’s evident. Somehow, it feels even longer still. Perhaps its the influence of parent company (and RPG specialist) Bethesda, or that awful notion that longer games represent better value for money, but it feels like a brilliant six-to-eight hour core game that has been spread too thin, a meagre helping of butter scraped across far too many slices of toast.

None of what’s here is inherently bad. Some of it is, in fact, very good indeed. But it’s such a shame something so lean and savage has become so bloated and overblown.

I can’t believe this is how I’m going to close a review of a Doom game, but here we are: Doom Eternal bored me to hell.

Doom Eternal features all the raw, raucous action of the 2016 reboot, but for reasons we can’t comprehend, is dragged out to an interminable length. Technically solid, blistering in parts, but lacking in soul.