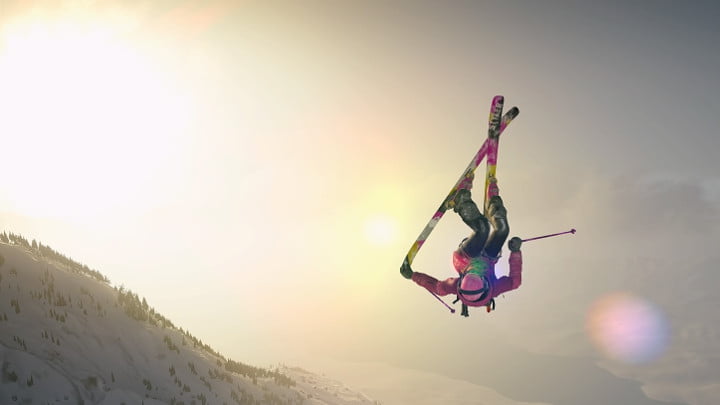 We went hands-on with Steep – could this be the first snowsports game to really capture the feeling of exploration inherent in skiing and snowboarding?

Dan may be quite partial to an open world Ubisoft game, but I’m really, really not. In fact, I feel like the Ubisoft open world formula – and to my mind it is just that, formulaic – has a lot to answer for. While Bethesda’s open world games cover huge breadth of choice and Rockstar’s are incredibly detailed, Ubisoft’s shoot for both and often achieve neither. They don’t look like cookie cutter games (like FIFA or Call of Duty) because of the size of the world and impression of choice, but Ubisoft are just as guilty of firing out tarted up, incremental updates as anyone else.

I literally haven’t enjoyed an open world Ubisoft since Assassin’s Creed 2 – and even that got old quickly – but I enjoyed playing one recently.

No, not Watch Dogs 2; I’m talking about Steep, the open world, open mountain snowsports game unveiled at this year’s E3.

For starters, Steep isn’t just about snowboarding, like most snowsports games before it. It also includes wingsuit flying and paragliding – more on those later – but there are two other, far more important modes of transport: skiing and walking.

Why are they so important to the potential success of Steep? Because basically every other snowsports game before it has been primarily concerned with what makes snowboarding ‘cool’, rather than what makes being on the mountain enjoyable. The snowboarding games of the past have poured all their efforts into the biggest ramps and the highest scoring tricks – complete with dudebro vocabulary and X-Games presentation – but in doing so have completely missed the true essence of snowsports. The real joy of spending time in the mountains is found in exploring, soaking in the environment, and getting lost in the experience.

Though I can snowboard a little in real life I’m a far better skier, so to me it’s important that Ubisoft Annecy haven’t ignored skiing in Steep, but more than simply for my own selfish bias: they’ve been clever enough to overcome some of the real life differences between skiing and snowboarding for the sake of playability.

Yes, you can generally get going a bit faster on skis than snowboard and if you get stuck on a flat spot it’s easier to escape with ski poles, but skiing in Steep isn’t appreciably faster or easier to get around than snowboarding. By the same token, you’re not better off shredding freestyle tricks on a snowboard than skis in Steep by default, which is equally important; there are no in-built prejudices concerning either sport.

But if you do get stuck, or lost, or just want climb back up the hill to take a better pass at a ramp? You can sling your skis or board on your back and stroll around Steep’s mountain on foot. It’s that versatility of play style, and the notion you can truly go anywhere or do anything, that makes the game so wonderful. Steep does have an overall mountain view, a sort of world map that you can use to teleport around – to locations you already discovered using binoculars, a less contrived version of ‘Eagle Vision’ – at the press of a button. You can also restart a run or a challenge at the press of a button too, but I only found myself using it when I really had to.

For starters, the mountain range is really big, even though we were limited to just three areas in the beta. This afforded me the opportunity, for the first time, to actually play a snowsports game how I ski in real life. From the bottom of the mountain, you plot your route as high as possible via the lift system (or in Steep’s case, via the magical mountain teleport) then ski or board for as long as possible, until you literally can’t go any further. Then you do it all over again, but take different routes coming down each time.

I saw the message telling me I’d run out of map so many times, and every time I did, I reached it with a massive smile on my face; then I teleported to the top and did it all again, discovering new things each time.

Then there’s the aforementioned walking method. Sure, it probably is quicker to swap into the mountain overview and teleport to somewhere higher up (and ride back down) than it is to climb back up the hill any great distance on foot, but in doing so you miss out on so much. Steep’s finely honed gameplay is at its core about travelling quickly and pulling off monster tricks – all of which cane be achieved easily, with style and aplomb – but the real joy to be had is just enjoying the environment. Taking a moment to just be still and enjoy the view, or to climb up to a better vantage point to take a screenshot, is something that you can only really achieve when you slow the pace down. Think about how many cool events you’d miss if you fast travelled everywhere in a Bethesda game and you’d be pretty close to the pleasure of exploration in Steep.

And lastly, there’s something I really wasn’t expecting: there’s some joy to be had in Steep’s unobtrusive multiplayer. You see other players riding the mountain and are offered the opportunity to ride with them if you choose, but that’s purely optional. It gives the game the feeling of being a living resort while never becoming overbearing or irritating. But one small moment that really made me smile was combining multiplayer with travelling on foot, when undertaking one of the game’s many challenges; this particular one saw you having to perform five jumps through checkpoints.

I’d completed four checkpoints and could see the fifth, but I was a bit stumped how to actually get to it. I’d restarted the challenge run several times, but no matter which direction I came at this checkpoint, I could never find the right angle to make the jump from. I started to realise that several other players were having the same issue, as I spotted the same avatars teleporting back to the top of the run just after missing the checkpoint, same as me.

After my ninth or tenth attempt at it, frustrated, I jumped off my snowboard and climbed up the hill on foot to survey the route. I still couldn’t see a good path down the slope to make the jump – I needed to clear two buildings to hit the checkpoint – and was a bit flummoxed. Running short on ideas, I climbed onto the first roof to get a better look, and realised I could use the downslope of the first roof as a run-in to the second. From my vantage point on the roof I could also see three or four other players – the same crew who had also been struggling with the challenge – all standing in the snow below me, watching what I was doing. I equipped my snowboard, rode the roofline, and hit the checkpoint.

Then I changed back to walking mode and climbed back up the hill to stand with the others, as we saw the next rider scale the roof and follow my lead. Our little troupe all ran through the same procedure, without saying a word to one another, then rode off our separate ways to enjoy the mountain. I wasn’t expecting to find a Journey-like moment in an open world game from Ubisoft, but that is precisely the right amount of multiplayer Steep needs; enough to feel populated, but not so intrusive as to get in the way of exploration.

There are a few niggles, though. While the beta felt like being in a ski resort off-season, the mountain was fairly quiet but there were enough other riders to feel alive, there could be a lot happening on the screen at any one time. Between all the markers for challenges and routes, and those for nearby players, the screen got really busy, really fast. Ubisoft’s open world games have a habit of being overstimulating, but it feels worse in Steep because you just want to enjoy the beautiful mountain.

I can live with the fact the game has to always be online for the fact a bit of human traffic makes the mountain feel more real, but it would be nice to be able to mute or hide the UI and notifications. This was particularly irritating when trying to capture screenshots; the game is absolutely stonking to look at, but it was hard to capture it without some nasty UI gubbins in the way. Even the replay mode, great for staging the perfect stills, has a UI that you can’t seem to turn off.

On that same vein, Steep’s mountain view is sometimes a little hard to navigate, even in the beta (which was limited to just three areas). If you want to get back to a run or challenge you’ve seen before you might spend an inordinate amount of time hovering over icons on the mountain until you find the one you wanted – if at all – and I can imagine this will only get worse with more of the massive open world to go at. The ability to search or filter runs by name or by type, for example being able to turn off anything other than freestyle skiing/snowboarding challenges (if that’s what you fancy doing today) would be immensely helpful.

Oh yes, and speaking of game mode overload, there’s wingsuit flying and parasailing. Honestly, I wouldn’t mind if either of these weren’t in the game at all. They’re not doing any harm per se – they’re taking place over terrain that has already been built, so it’s not like they’ve reduced the fun you can have with the other, better modes – but they’re frankly boring and poorly realised. Parasailing is nice and tranquil and could be a lovely way to while away the time, but you can’t really enjoy the visuals because of the sheer amount of UI guff visible on screen from a high vantage point.

The wingsuit flying, on the other hand, is just crap. It’s supposed to be a high-adrenaline rush but it feels disconnected and dull; it’s more like dodging left and right in rolling road racing games of the eighties than a flying through a living, breathing open world.