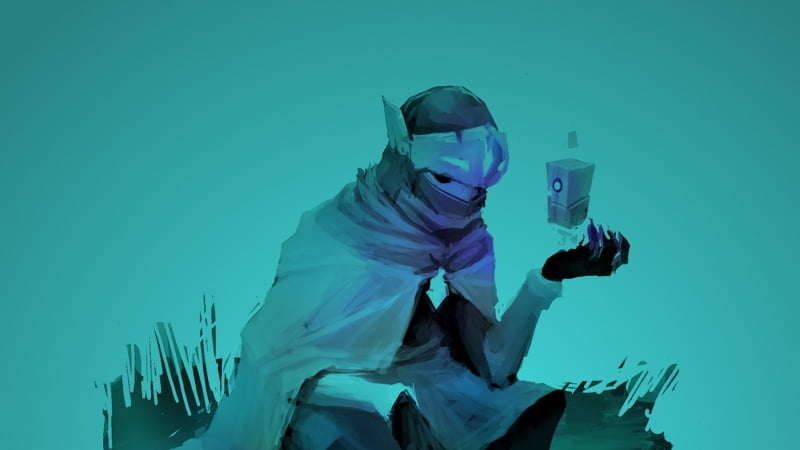 Hyper Light Drifter is out now on Nintendo Switch. Is it yet another game that’s worth double-dipping on?

There’s a lot of talk about games being “perfect” for the Nintendo Switch. Often, that’s purely concerned with genre, portability, and the opportunity to waste a lot of time in more comfortable environs. Cities: Skylines. Civilization VI. Football Manager. That’s about what they are.

There’s something intimate, tangible, playing Hyper Light Drifter with the Switch undocked. There’s Nintendo’s HD Rumble feature, of course, which allows the Joy-Con to return different sensations via their multiple vibration motors, but you still get that playing docked and on a TV.

The difference is the sound.

The soundscapes in Hyper Light Drifter are something else. They fizz and spark electric, with a rumble of synth keys and eerie cries of tortured machinery. They’re beautiful however you play, but on handheld, you’re going to feel them. Whether that’s through the Switch’s on-board speakers or in your ears with headphones, there’s a sense of connection to the game’s audio which has previously been missing. Or rather you didn’t realise it was missing, until now.

Between the HD Rumble and the vibration of the Switch’s gutsy speaker, you’ll feel a combination of music, effects, and feedback from the game. It tingles, vibrates through your hands and up your wrists and along your forearms. It feels like a clashing jangle of nerve endings. If you’re playing with headphones – preferably in the dark, bathed in the fluorescing glow of the game’s unique visuals – you’ll feel the thump and thrum of Hyper Light Drifter’s audio wired directly behind your jawbone.

This is some new kind of magic.

The game is, of course, as beautiful as ever. Its evocative art style and wordless narrative – tying together the physical and emotional struggles of both the titular drifter and its creator, Alx Preston – are as powerful as ever. Hyper Light Drifter delivers a haunting and personal take on classic Legend of Zelda (rolled through a lo-fi Tron filter) and it’s not diminished in the journey to Nintendo’s little console that could.

It’s splendid however you choose to play, but – along with that sound and that rumble – it really sparkles on the Switch’s small screen.

Hyper Light Drifter isn’t all nice, however. It’s still a tough game and the mix of action RPG, swordplay, dodge roll, bullet hell, giant monster madness won’t be for everyone. There’s very little signposting and no hand-holding at all (though that’s in the spirit of the classic games it strives to not just emulate, but stand shoulder to shoulder with across the decades).

Challenging games are fine and it’s horses for courses, but not being able to change the difficulty can be a bitter pill; if someone starts the game and finds it too much of a struggle, they’ll have to start again to embark on the easier difficulty.

There’s also a co-op mode which, in many respects, is ideal for the Switch and very similar to the drop in/drop out co-op of The Swords of Ditto. It adds additional options to the experience, but where a game like Ditto or Journey feels better with a buddy, Hyper Light Drifter feels more at home as a nomadic experience.

But it remains, as it always has been, quite the experience.

Hyper Light Drifter’s a tough game and for that, it won’t be for everyone. But if it already has your interest, your admiration, or your love, then it has – all hyperbole aside – found a perfect home on the Nintendo Switch.