Is Kirby and the Forgotten Land a memorable first foray into 3D for the adorable pink sphere?

With Kirby and the Forgotten Land, HAL Laboratory has clearly studied 3D World’s streamlined design to help craft Kirby’s first 3D adventure. Rather than Kirby’s riff on Mario 64 or Ocarina of Time, Forgotten Land is a quiet revolution that feels like Super Mario 3D World by way of Retro Studios.

Each level in Kirby and the Forgotten Land offers a new idea wrapped in the pseudorealism of the world they inhabit, just like Retro Studios’ Donkey Kong Country: Tropical Freeze.  There are no random floating blocks here. Wondaria Remains in particular, an artistically lush theme park area in Forgotten Land, showcases this with its electrified rides and malfunctioning animatronics plus an inventive house of (mild) horrors.

Just like Mario and Sonic before, then, it’s Kirby’s turn to take on the real world, although, a tad more post-apocalyptic than Station Square or New Donk City. After being absorbed into a vortex and transported into the titular Forgotten Land, the villainous Beast Pack captures all the Waddle Dees, leading Kirby on a rescue mission.

As someone who bailed on the franchise with the beautiful yet boring Kirby’s Epic Yarn, I was excited to jump back in and find a difficulty level that is, dare I say, almost perfect in Forgotten Land. It feels like a game for everyone, even those wanting a challenge. You don’t go into a Kirby game expecting a high degree of difficulty, but HAL has cooked the game with a fair amount of spice this time. A dash of the game’s harder difficulty, Wild Mode, gives the usually mellow, comforting taste of Kirby gameplay an engaging bite. The last levels really ramp up the challenge and the final boss is decidedly spicy.

With a dodge that activates a Bayonetta-style “Witch Time” slowdown when timed correctly, Kirby and the Forgotten Land feels like a children’s take on the character action formula. It makes the game – and especially the bosses – a lot more replayable, with the risk and reward of a stronger hit after a successful dodge. You should familiarise yourself with it, especially if you want to take on the generous, punchy post-game content.

Speaking of content, there’s a lot to keep you busy in the titular Forgotten Land. Levels are stuffed with hidden caged Waddle Dees, toy capsule figures, blueprints to upgrade copy abilities, and various side objectives. Each level has its own hidden objectives that can be as varied as destroying wanted posters, finding scattered ducklings to return to their mum, completing a battle without getting hit, or even eating hidden morsels of tasty food. Part of the fun of each level is working out what these are before you figure it out. 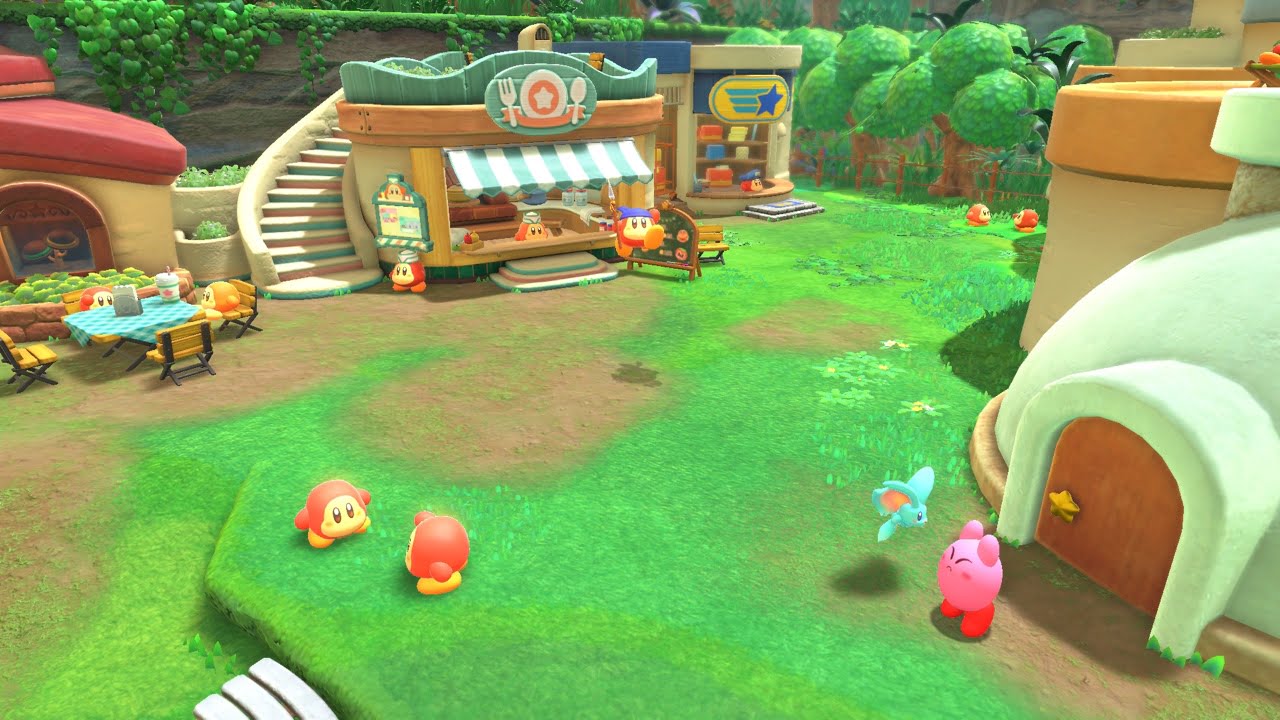 Another inclusion that adds to the difficulty is the numerous Treasure Road challenges that appear after you finish a level. These challenge rooms are wildly inventive and – just like the name suggests – fairly challenging. Finishing these within the targeted time limits will be a tough task, and the ways they use the new Mouthful Mode (Mario Odyssey-style capture abilities) are really clever.

Kirby and the Forgotten Land is not perfect though. It is surprisingly responsive at 30fps, but its boss fights, in particular, would benefit from being smoother. It could also use a faster movement option to up Kirby’s slow pace, and a bit more depth to some of the copy abilities wouldn’t go amiss. Also, while the soundtrack is above average, the quality of digital instruments lets it down a little – where are the musicians Nintendo hired for Mario Kart, Paper Mario, and nearly every 3D Mario?

I really didn’t think HAL had it in them to make such a great first foray into 3D. Sometimes levels open with astonishing vistas and all you can do is stop and say “wow” – something you will definitely say again when you see the game’s ending, one that would make Hideki Kamiya proud.

While Kirby and the Forgotten Land isn’t a reinvention of the 3D platforming genre, it was never meant to be. Kirby is for everyone and this is where the Forgotten Land truly excels. It’s a cosy, warm and special game that adds another link in the chain of exceptional Nintendo Switch exclusives. HAL Laboratory’s first 3D game is a triumph; here’s hoping BoxBoy! follows suit next.

Kirby and the Forgotten Land review

Kirby and the Forgotten Land stays away from the full-on open-world formula, opting instead for a structure more akin to Super Mario 3D World, and is all the better for it. And with the welcome addition of a little more challenge than some of Kirby’s previous games, there’s plenty to keep you coming back to this one.

Shaun is a writer, artist, and unholy devourer of pizza, but most importantly, he waits for Mother 3 in a state of cat-like readiness.