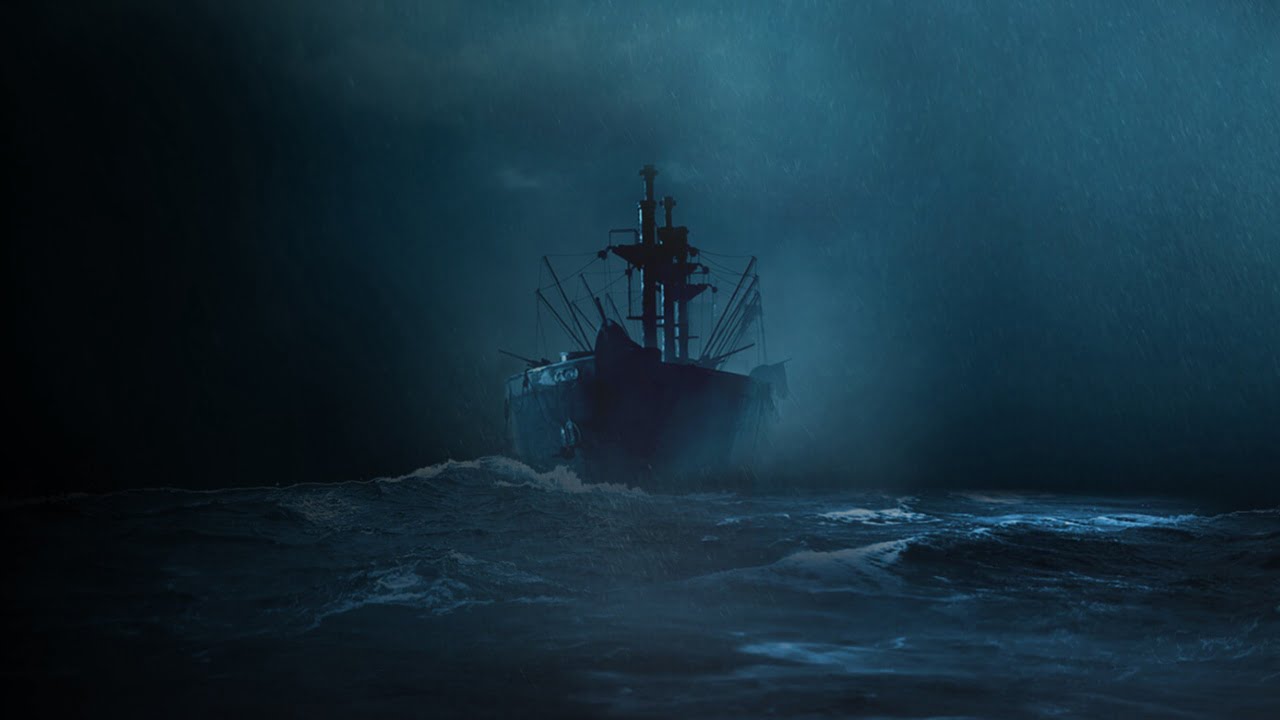 As you might expect, Man of Medan is crammed with a cache of adventure and horror game clichés.

“Adjust the slider so the image on the left is invisible, the image in the middle is barely visible, and the image on the right is visible,” instructs Man of Medan. It’s a tool used by environment artists and the producers of horror games to ensure everything is dimly lit and foreboding. It’s like game designers watched one horror movie – Silence of the Lambs, specifically the basement scene – and decided between them that’s it. That’s the one aesthetic for horror games.

And of course, because this isn’t my first rodeo, I slid it all the way to the right, to the maximum brightness setting. Let me tell you, reader, I still couldn’t see a bloody thing.

This is not a criticism levelled specifically at Supermassive here. Horror games designers, you’re all guilty of it. But if I have to open hidden menus on my telly to literally make the colour black less black, just so I can see where the exits from rooms are, your game is too dark. In its darkest moments, the visuals of Man of Medan are inscrutable. And this is a horror game. It’s dark almost all the time.

Then come the quick-time events.

QTEs in Man of Medan highlight some of the worst of the oeuvre. They are too fast. They are too unpredictable. They jump too readily from your thumb on the right stick for dialogue choices to the face buttons for dodges and feints. They require machine gun button-mashing to complete simple tasks. They’re all just dreadful. And of course, quick-time events are intrinsically linked to that other horror staple, the cheap jump scare. Man of Medan is riddled with them in its scariest middle third.

Even Until Dawn’s favourite – and arguably, cleverest – QTE, the keep-the-controller-really-still-or-your-character-dies, is back. In a fashion. Man of Medan is multiplatform, unlike its Supermassive predecessor, so the Sixaxis gyro of the DualShock 4 isn’t an option. Instead, stillness has been replaced with a rhythm game of sorts, tapping buttons in time with your character’s heartbeat to stay calm. That means you can’t just put the controller on the floor this time, alas. It also meant I wasn’t concentrating on the on-screen action at all, my eyes trained on the heartbeat bar.

Luckily, there are accessibility features that blunt some of the QTEs. The button-mash variety can be swapped for a press-and-hold – vital for players with restricted dexterity – while you can make button taps linger on the screen so they’re harder to miss. You do have to wonder though, in the year 2019, why has nobody come up with a better method for interactivity in scripted sequences yet?

Man of Medan also features the ever-irritating object inspection mechanic. Hold a button, grab an object, use the right thumbstick (or mouse) to observe it from all angles. It’s meant to be a way for you to find secrets and hidden information under objects, but mostly, you just end up waving your arms around with flotsam glued to your sticky meat appendages. Otherwise, the game’s controls – in particular, the fluid, twin-stick-alike flashlight control of its exploration sections – are excellent.

The biggest – and most baffling – cliché in Man of Medan is one entirely of Supermassive’s own making, however. Like Peter Stormare’s uncanny psychiatrist in Until Dawn, for whatever reason, we are not allowed to play one of their horror games without a creepy old white dude in a study or library narrating the experience.

In Man of Medan, the creepy old white dude in question is the mysterious Curator, played with smarm and relish by English character actor Pip Torrens. He grabs a tome from the shelf – alluding to Medan’s position as the first in the Dark Pictures Anthology, no doubt – and proceeds to tell us, at great length, that our choices matter.

But where meetings with Stormare’s psychiatrist adjust the themes of Until Dawn’s horrors based on your real-life fears, the Curator is an impassive observer. A man who seems to be omniscient, but offers scant advice. A man who seems upset that you’re getting people killed, but makes no suggestions for how to stop it. He just exists to remind you that your choices will change the flow of the game. At every available opportunity. Like a stuck record.

I’m not against tutorials in video games. Far from it, in fact. So many people bounce off games and genres because developers assume a level of knowledge among a varied audience, and gatekeeping should be torn down at every opportunity. But in a world that is both post-Bandersnatch and has had Fighting Fantasy books in the mainstream for 37 years, the constant reminders feel unnecessary. Borderline insulting, even.

This compulsion to “show your working” on the decision tree isn’t a problem specific to Supermassive’s games. Telltale’s games liked to compare your choices against the wisdom of the crowd, with stats of your choices versus everyone else’s. The first season of Life is Strange used its supernatural powers to offer you a chance to change your mind on some big decisions. Quantic Dream’s games graph out your choices, attempting to bamboozle you with the sheer number of decisions you could have made, like some sort of adventure game pissing contest.

But Supermassive, for some reason, chooses to anthropomorphise the decision-making process with a sneering, middle-aged white man. And given the proposition of Man of Medan as the first in an anthology, it looks like he’ll be here to stay for a few games more yet.

So after some 900 words complaining about Man of Medan, you might be mistaken for thinking that I hated it. That’s far from the truth.

Nobody does atmosphere quite like Supermassive. Production values and visual detail are rarely this high (when you can see it, through the gloom) and they are at the top of the game when it comes to performance capture. It is, however, worth noting that the game is janky, on the original PS4 at least. It’s a sign that the previous generation of consoles are struggling with ambitious titles in their old age, though we don’t doubt Man of Medan will perform better on PS4 Pro, Xbox One X, and of course, high spec PCs.

The game’s narrative, while a little meandering and reliant on characters doing stupid things – this is a horror, after all – is also well put together. To follow so many possible strands (where literally any character can die) to a sensible conclusion is incredibly challenging. But to arrive at the game’s denouement, and find that you are impressed by not only its conclusion but the explanation for how everything and everyone arrived there, supernatural warts and all? That’s no small feat.

Praise should also be given for Supermassive’s inclusion of multiplayer options in Man of Medan. The game features a dedicated controller-swapping party mode – where each of the five characters is assigned to different people in the room – and true online co-op where you play different characters simultaneously with a friend. It takes the sort of ad-hoc, improvised multiplayer we weave into these adventure games as interactive TV series and makes them mainstream options. It’s a wonder it hasn’t been done more before.

Ultimately, Man of Medan is far from perfect, but perhaps that’s more a problem with the tropes and clichés of the genre than one game specifically. As a piece of absorbing, spectacle horror, however, Supermassive has worked its rare magic again – when the Curator’s not banging on about choice and consequences.

It may be clever, scary and intriguing, but Man of Medan rarely reaches the heights of its stablemate and elder sibling, Until Dawn. Perhaps its a case of difficult second album syndrome, or more likely, it’s just too weighed down by the tropes and trappings associated with the genre. (And the sooner Supermassive ditches its penchant for fourth-wall-breaking, creepy old narrators, the better.)

30 years later, Flashback is getting a new sequel