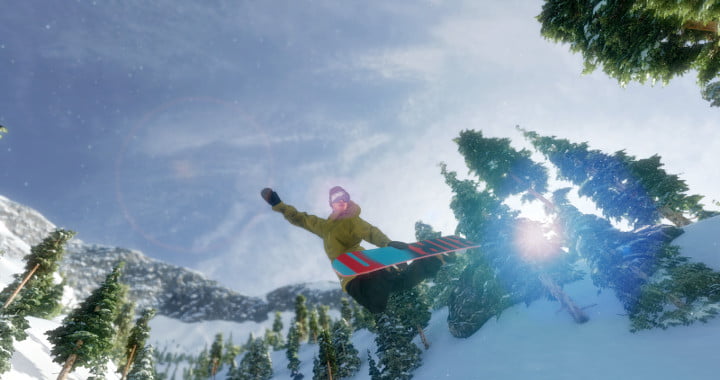 There are two main schools to sports and simulation games: the casual, easy to pick up jaunts that anyone can enjoy, and the hardcore, skill-taxing challenges that require dedication to get anything out of.

The FIFA series, Need for Speed and Tony Hawk’s Pro Skater fall into the former camp, while Pro Evolution Soccer, Gran Turismo and S.K.A.T.E. are in the latter, for example. And Mark McMorris’s Infinite Air? That definitely wants to be seen as the serious snowboarding simulator.

Just a quick glance at the control scheme on Infinite Air, delivered through a tutorial from the moment you start the game, will let you know this isn’t your average button masher. For starters the face buttons on the controller don’t really do anything at all, save for some perfunctory commands like getting back up after a fall, restarting the run, or calling for the chopper (more on that later). This isn’t the kind of extreme sports game where you can hammer a couple of buttons and pull off obscene tricks.

Instead, you’ll need to learn about controlling your character’s spin and rotational locomotion, which includes ‘winding up’ for a trick before you attempt it. If you’ve ever watched a real snowboarder pull off a trick, you’ll see that they don’t start spinning when they’re in the air. Rather, before they jump they’ll twist their body like a pre-tensioned spring in the opposite direction, ready to unleash that kinetic energy into serious rotation once they’re in the air, and that’s the principle behind Mark McMorris Infinite Air.

Spins are generally pretty manageable. Once you’re in the air, you’ll nudge the left stick in the direction of the spin to increase the rotation, or against it to slow down. Hold the shoulder buttons and nudge the right stick while you’re in flight and you’ll perform various grabs to add to your score; the more variety you muster, the better your scores will be. The ultimate aim is to land with the board pointing forwards and if you do so, you’ll achieve the most points for a trick. OK or sloppy landings, or ‘buttchecks’ – that is, hitting the deck with your backside – will reduce scores accordingly, and if you bail, you’ll score nothing at all. It’s a fairly forgiving mechanic that ensures only the gnarliest of spills are penalised, but it’s relatable to the real world.

If you hold the right stick while you’re ‘winding up’ for a spin however, you’ll also introduce vertical rotation into the trick. And then you’ll land on your face. Every. Single. Time.

While lateral rotation seems to be relatively sensible and within the wheelhouse of most players, vertical rotation is in the lap of the gods. Outside of single flips off the tiniest of humps, there seems to be little correlation between what you do as a player and your chances of landing a flip. Whether you’ll land right-side up or drag your face along the ice seems to fall somewhere between timing and dumb luck. Expect to fail dozens of times at a run before you do it well, and expect to do better when you attack the kickers conservatively yet consistently.

The correct way to play Mark McMorris Infinite Air, then, is to treat it like real snowboarding. You’ll need to practise, and practise bloody hard. In the real world, a snowboarder will walk a run several times – or at least, pootle down it at snail’s pace – before they even attempt a jump, never mind something expansive and death defying. Real snowboarding professionals at the Winter Olympics or in the X-Games will have their run planned out with meticulous detail; if you want real success at the challenges in this game, that’s how you’ll need to handle it.

So what games modes are available, then? First of all are the single player challenges, a series of objectives that function like a campaign, but with none of the cool bits like character progression. You can unlock and play as an assortment of famous boarders and edit your character’s clobber and gear, but it’s all purely cosmetic; there’s no variation whatsoever in the way the riders or boards play.

Then there’s the open world you get to explore, which is a sort of freeride sandbox. You head off into the mountain range on a helicopter – Red Bull-branded, naturally – and can drop into any part of the environment you fancy. You can also call the chopper anywhere, at a moment’s notice, at the press of a button. That’s a very cool feature and makes everything very accessible. Heading off-piste through deep powder is a lot of fun, but there aren’t many opportunities for jumps and tricks, so you’ll be zeroing in on the park features more often than not.

This can be very entertaining, at least for a short time; luckily there’s a world editor included that allows you to mangle the mountain however you see fit when you get bored. You can even save and share your creations online, and Mark McMorris Infinite Air is clearly geared up towards the online world. Other players’ runs will show up in your world like goading challenges, while the ability to easily rewind and replay sections is ideal for streamers.

Mark McMorris Infinite Air is also very pretty to look at, if a little vanilla. Focusing on making the mountain open and editable has come at the expense of it feeling like a real mountain resort. There are odd clumps of buildings at the foot of major runs, festooned with the banners of snowsports competitions, but there are no lifts, infrastructure, or any other signs of life; just your own trails through the powder. The soundtrack is similarly sparse – the songs on it are great, but they number too few and quickly grow repetitive – and the game’s overall presentation serves as a good metaphor for the game, lacking in breadth and diversity of experience.

Mark McMorris Infinite Air is by no means a bad snowboarding game. If you’re looking for a challenging snowboarding simulator with a realistic approach to tricks (and failure) then this is absolutely the game for you, but if you’re looking to lazily noodle a few buttons and feel like a superhero then you’re likely to be disappointed. Additionally, the pretty but somewhat skeletal open world will probably suffer in comparison against upcoming titles like Steep and Snow.