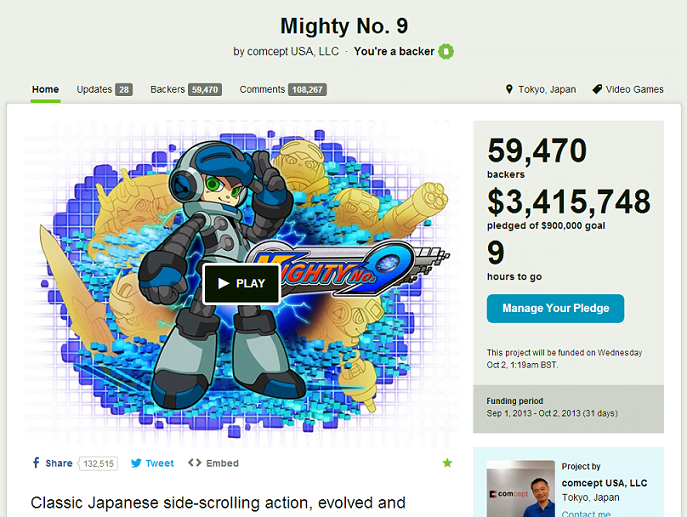 The Mighty Return of Mega Man – The Mighty No. 9 Kickstarter

Irrelevant metaphors aside, a great many of my fondest gaming memories involve being sat cross-legged in front of a television with an old Nintendo or Sega controller in my hands, jumping as Mario, running as Sonic or shooting as Mega Man. And while these three characters are all in very different places today than they were back then, they still mean a lot to those of us who grew up with them.

Mega Man in particular is one of the great retro video game characters, and while he struggled to keep up with the development of newer consoles, his classic and X series make up some of the most iconic images from the 8 and 16-bit era. So the question must be asked: (and has been continuously screamed by gaming communities for the past half decade) Why does Capcom seem content to relegate Mega Man to a dusty shelf at the back of a warehouse, unused and unloved?

We saw a lot less development of Mega Man and Mega Man style games after the 90s, and the release of a new game within the series became much more sporadic as the decade went on. Aside from a few releases here and there with no real Capcom muscle behind them, fans really had started to believe that a visible end for the blue bomber might be on the horizon, that was until Keiji Inafune, veteran game developer and ex Capcom employee announced he was starting a Kickstarter for his new game development company to create the Mighty No. 9.

During the pitch video on Kickstarter, there were many allusions to Mega Man and talk about how it’s themes of the combination of man and machine is more relevant today than ever before. Inafune, along with his team at Comcept, many being Mega Man veterans revealed their spiritual successor to Mega Man: The Might No. 9.

Already incredibly similar to the classic Mega Man titles in style, tone, gameplay, plot, gameplay mechanics and music, No. 9 is more than a throwback to the series, it’s a real spiritual successor, intending to pick up where Mega Man left off and start at a real running pace. It’s obvious that Mega Man is as close to Inafune’s heart as it is to all the fans out there based on the overwhelming response the Kickstarter received.

No. 9 isn’t just masturbatory material for teary eyed retro gamer though, it makes incredible business sense too, people are willing to pay money for these retro style games, and older gamers with more nostalgia than sense more willing than most to back projects such as this based on very little except promises and concept art.

Setting a $900.000 target, the Mighty No. 9 Kickstarter met its goal within 24 hours and then processed to pass the one million mark before its first day was over. Since then the project as met with astounding fan support and the internet had been filled with fan art and music in the short time since the Kickstarter has been announced. There is real excitement surrounding the project, again with very little to go on aside from conceptual images.

I have been keeping a close eye on the Kickstarter as it has continued to build funds, and even I have been amazed at the backing the project has received, reaching stretch goals far exceeding my expectations. Even now as I write this, the project has just hit the 3.5 million stretch goal, meeting the requirements to develop the game for the 3DS and Vita consoles.

Being over 370% funded, the game has exploded in its scope, now being available for nearly every platform, including the next generation consoles. Since reaching funding, the game has added four new stages, two new bosses, three new game modes, including a multiplayer mode, and could go even further in the few hours it has left. And Comcept have made frequent use of the feedback available on Kickstarter, not only actively interacting with their backers, but allowing fan themselves to create character concepts for main characters within the game, giving their fans more attention in these months than Capcom has in years.

The outstanding success the Mighty No. 9 has enjoyed is solid proof that there are tens of thousands of people out there willing to put money into a project like this that won’t actually see the light of day for another couple of years, a few of which who are even willing to put thousands of dollars into it. And yet it amazes me that Capcom have continued to let the franchise that was the genesis of this project fall into obscurity.

No. 9 wasn’t the first time Keiji Inafune has tried to get a fire under Capcom and bring Mega Man back to the masses. He was the driving force behind the conception of Mega Man 9 and 10, the two retro style throwbacks to the first six Mega Man games on the NES.

But even then, when Inafune pushed to make Mega Man 9, Capcom fought against it during several stages of production, wanting them to make a 3D game to begin with, and then make the 8-bit graphics style an option in favour of more current gen graphics. Capcom felt that only the older fans would be interested in such a game and they would lose sales developing for such a niche market. Somehow the team won out and got to make the NES style game they wanted.

It was no secret that Inafune was becoming  jaded with the way things worked at Capcom, receiving a promotion but then leaving the company altogether a few months later. He felt that Japanese game developers were falling behind the times and were being outdone by the more innovative developers in the west.

Looking through all the most recent Mega Man releases, it does seem like Capcom has even less of a hand in the projects that their name on the box would suggest, all of the titles developed since the millennium being mainly developed by another party. Hell, Capcom didn’t even bother to celebrate the franchise’s 20th anniversary. The only thing we saw to celebrate Mega Man turning 20 was a fan project that Capcom gave the nod to in Mega Man X Street Fighter.

It’s almost criminal what Capcom have done with the Mega Man property, with what could have been their flagship character and face of the company, their Mario, they have been content try and forget him and focus on other projects. While early attempts to incorporate Mega Man into 3D environments were something of a disaster, there is no reason to give up on him. Even Sonic the Hedgehog, who looked like he was on his way out has found new life and looks like he might be getting another great title in Lost Worlds, so who’s to say that Mega Man couldn’t find the same new life.

Hell, depending on the success of the Mighty No. 9, who knows what future the character could have, it really could go either way. Capcom could very well let Beck become the new Mega Man and let No. 9 take the franchise flag. Or maybe they will finally feel the kick up the backside and start developing something with the character. It’s even possible that they might sell the character off; Sonic has all but become a Nintendo character at this point, with Mega Man’s upcoming appearance in the new Super Smash bros. who is to say that the same might not happen to the blue bomber?

As of the time I’m writing this, the Mighty No. 9 Kickstarter has about 10 hours left and is just over the 3.5 million mark, having just assured its development for the 3DS and the PS Vita.

I, like a good many other people out there, am incredibly excited about the Mighty No. 9. And I’m glad to see Kickstarter once again breathing life into projects such as these which otherwise would have never seen the light of day. The more projects like this I see, the more I start to believe that crowd sourcing could very well become a viable method funding new and interesting indie games, which in my opinion has been where all the real innovation and creativity has been taking place in modern game development. The only trick is finding a nostalgic property to grab people’s attentions, which reminds me, isn’t there a new Shantae game looking for funding too…

You can find the Kickstarter page itself right here: http://www.kickstarter.com/projects/mightyno9/mighty-no-9

Update: Very, very early footage of the game which is being made using the unreal engine: https://www.youtube.com/watch?v=5UXDiQrgI6M&feature=player_embedded#t=0

Update: Since finishing this article, The Mighty No. 9 kickstarter has ended, the final funding amount being $4,031,550 from both the kickstarter page and their Paypal account, managing to reach it’s goal nearly four and a half times over. Backers managed to clear every stretch goal the company had, which is an astonishing feat. The final three goals give the game an additional stage where players take control of the sidekick character Call (whose design was entirely decided by fans), an extra entire soundtrack for the game all in the style of 8-bit chiptunes and an online competitive mode which treats stages somewhat like time trails where players can race one another for the best times.

I don’t know if this is one of Kickstarter’s biggest successes, but it the biggest one I know about. Fans and enthusiasts from the world round have really rallied behind this project in order to make it a reality. I’m sure the people at Comcept won’t go silent for the couple of years it takes to actually make the game now and we”l be getting regular updates as to the progress of the game, they seem very thankful of their fans and backers and seem to want them to be a part of the whole development process. It’s a great story amongst al the negativity that makes up the usual games journalism article.

If flip flopping the line between cynicism and enthusiasm was an illness then I would have a nifty obscure disease named after me, but seeing as how it has yet to be diagnosed, I'll settle with just being inconsistent.

When is Pokémon Scarlet and Violet coming out?

Pokémon Scarlet and Pokémon Violet will be released on the Nintendo Switch in November 2022. Here is the release information you need.
3 minute read

Nintendo, please do this one thing before retiring the 3DS

The Nintendo 3DS all but dead, but we need one last favour from Nintendo before it goes.
4 minute read

Could Splatoon be going free-to-play?

With the sun setting on Splatoon 2, could the franchise’s future be free-to-play?
3 minute read
© 2023 Thumbsticks | Interesting articles about video games.