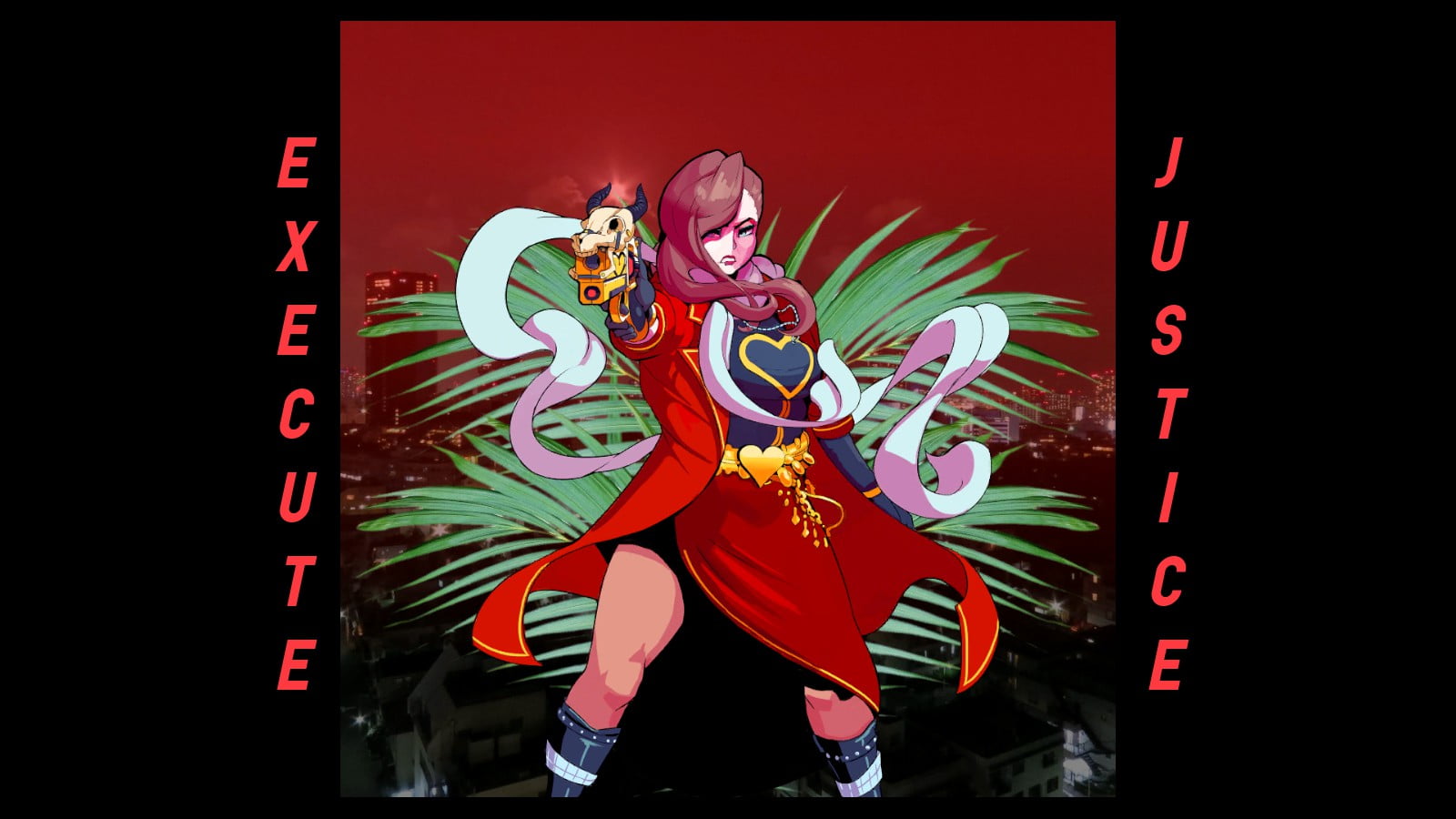 Whilst I don’t think it managed to land the killing blow for me, I’ll be damned if I wasn’t in paradise from start to finish.

Paradise Killer’s biggest achievement isn’t its detective mechanics or sheer style (although that’s a close second) but the quality of its writing. You initially think you’re entering a world so “other” as to be impenetrable. Within hours you’ll be able to explain the rules of “psychic pathways” and “god deception” such that you can catch out suspects based on arcane rules.

This world-building elevates everything else around it. For much of the experience, you’re let loose upon an open world “paradise island number 24”. It’s just the perfect size as to be initially overwhelming with possibilities and then compact when you’ve become acquainted with it. Whilst suspects wait in their respective spots for questioning, you can absolutely ignore the case for hours on end by going down the collectable rabbit hole.

Meanwhile, Paradise Killer’s first-person platforming is… surprisingly good! An unlockable dash and double jump make traversal a joy. This is key to enjoying the hundreds of blood gem cash money lying around, new tracks to bop to, conversations with your favourite demon Shinji, and world-building relics. With this lack of direction, it’s easy to miss these traversal and door-hacking unlockables for a head-slappingly long time. But I wouldn’t change it. Paradise Killer’s free-form nature is one of its biggest strengths.

The relics are my favourite collectable by far since, unlike most games, they show that it’s not an empty enterprise. Given achievements are yet to be present, it’s these little nuggets of info that make Paradise Killer’s world so constantly entertaining and engaging. Did you know that “Carps were created by an alien race and their scales can be translated into an esoteric language if you have the correct cypher?” Did you know about the “area of space that can only be traversed by an ancient race of octopus-likes that harden into crystals to survive micro maelstroms?” It feels like writing absolutely let loose – almost to the point of risibility, but not quite. Simply amazing.

Not to engage overly in either/or nonsense, but Paradise Killer’s vaporwave aesthetic is a great argument against triple-A ray-tracing hegemony. It isn’t afraid of delivering whole-island views that expose its relative lack of modern VFX. But when Aurora night skies burst with colour and a gargantuan moon rises above the underclass complexes, I’ll be damned if I care. Indeed, one of Paradise Killer’s best tricks, that it presents in the first five minutes, is also an exposing one: a complete overview of the PS2/PS3-era textureless island before you launch yourself down and the opening credits roll. And do you know what? It’s breathtaking stuff.

It should be commended too that Paradise Killer uses the vaporwave aesthetic for the purpose it was intended: a damning criticism of the superficiality of capitalism. It achieves a genius knife-edge balance between a semblance of paradise with its upbeat tone and tropical white beaches, contrasted with oppressive brutalist structures and ritual sacrificial sites. This presentational incongruity that it executes so well never loses its intrigue. Paradise Killer is politically cutting in all the right ways.

Needless to say, its vaporwave snythy, saxy, funky tunes are worth buying in isolation. They’re a big part of why its atmosphere works. You could rob Paradise Killer of everything but a stroll on its beaches with its soundtrack and you would still have an excellent time.

Other than exploration and world-building, it’s the character conversations that are the game’s lifeblood. All entertaining; all memorable. In fact, my favourite is the aforementioned “collectable” scattered around the island. I find it heartening that one of the best relationships protagonist Lady Love Dies has is with a bona fide demon that should have been long ago exterminated. Tending towards antagonistic, maybe, but somehow there’s the illusion of development despite the random order you have the conversations. He’s great comic relief and also a good reminder that the syndicate you’re working for is a capitalism-mirroring overclass cult that kidnaps and slaughters people to feed their gods psychic energy. (I love a good class ally. Who’s the real demon, here?)

The entire game is a free-form prelude to the much-hyped court trial you can activate at any time. This is where Paradise Killer’s mechanical detective fangs finally protract in earnest. Whilst dispensing justice is suitably thrilling in its no-holds-barred brutality – every conviction is an execution – I think the true solution is perhaps too unambiguous for my liking. Whilst it doesn’t present a results page, there’s outright fessing up to crimes. Find all the clues (and some of them are well hidden) and you really can’t go wrong. I wish perhaps that there was a way to remove the notes screen so that the player could be forced to fill in their own deductions. This would make it easier to miss certain clues and lead to more interesting court trials.

All the same, there are some very interesting aspects to the trials outside of playing them straight. There’s an element of overlooking the crimes of those you’re sympathetic to and have bonded with. If you’re inclined to have a clean slate, convinced as you are of Syndicate corruption, you could even manipulate the trial to wipe the syndicate out. Quis custodiet ipsos custodes?

Whilst I wish Paradise Killer’s mechanical detective fangs were a little sharper, it oozes style and its writing and world-building are out of this world. It’s not a lie when I say I wanted to stay forever here in paradise where love dies. I already know as truth/fact that when it comes to this game my love will never die.