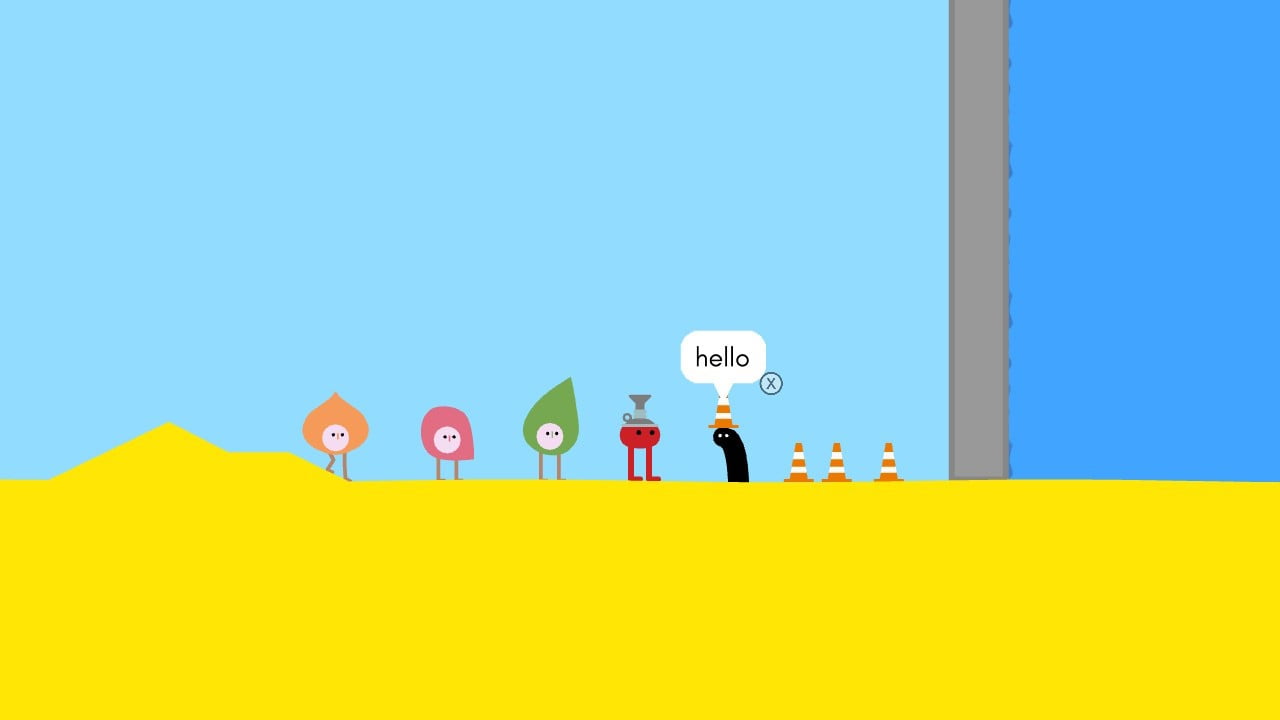 Pikuniku looks, on the face of it, like a brightly-coloured, simplistic platform game for children. It’s full of bold shapes, gentle puzzles, and a twee, easy-to-understand narrative delivered in short, sharp sentences.

But in much the same way that kids’ films include jokes to entertain just the adults, there’s a deliberateness to the way Pikuniku is presented – in particular, its narrative – that hints otherwise. It’s most definitely Millennial. Almost nihilistic.

The dialogue in Pikuniku switches from casual, off-hand, inane chatter – delivered in all lower-case, with little punctuation – to statements shouted and all in caps, with multiple exclamation points and the text literally jumping up and down for dramatic effect. It’s a use of language and delivery that is born of Twitter, wholesome memes, and a degree of internet and media-savvy that most self-proclaimed “comedy” games can only dream of. It’s genuinely very funny.

You might think it unkind to say that Pikuniku seems to be following Night in the Woods as something of a template, but given how much we love the latter (and how good a job developer Sectordub has done of the former) that is unequivocally a compliment. Probably the biggest one we can give.

The story, too, feels of our time. One minute you’re admiring how wiggly a worm is, playing hide-and-seek with a rock, doing battle with a malevolent toaster, or competing to kick a watermelon through a basketball hoop. The next you’re trying to save the world from the evils of environmental destruction, rampant materialism, gentrification, and working “for exposure”.

It’s a heady mix of silly distraction and terrifying news cycle that mimics the ratio we see in real life. The difference in Pikuniku is that you can actually do something about the bad stuff (while still finding joy in the little things).

And there is so much joy in Pikuniku.

To play Pikuniku first brings to mind Loco Roco, a similarly simple, squishy and succulent 2D platformer with a bright, space hopper-like protagonist. Where Loco Roco sees you rolling and flopping and bouncing and growing your way through the levels, though, Pikuniku has you running about on absurd, spindly, almost QWOP-like legs, squeezing through small spaces, swinging on hooks, and generally kicking stuff.

There are elements of other classic platform games in there, too. Everything from cutesy Nintendo affairs – Kirby, Yoshi – to more complex games – Wonderboy, Ori, Dust – are represented, complete with all of the objectives, new abilities, and backtracking (to enter previously inaccessible areas) they entail.

Your primary verb in Pikuniku might be to kick, but soon you’ll learn a whole bunch of other skills via outfits. Some are functional, others allow you different dialogue choices with NPCs, and a few are purely decorative. Our favourite is the ability to water plants with a head-mounted watering can, which can allow you to access new areas, but the ungainly, uncontrollable spaghetti arms are hilarious.

There are also light physics and puzzle elements to Pikiniku, which brings to mind fantastic Nintendo Switch launch game, Snipperclips (or the artist formerly known as Friendshapes, which we think was the better name). From placing objects on switches to controlling water flow to rotating puzzle pieces, almost every basic puzzle platform game trope is touched upon; the important thing is they are deft touches, and no one mechanic is leant on so firmly as to become dull. Pikuniku also has a raft of two-player, co-op missions in addition to the main story (if its similarity to Snipperclips wasn’t apparent enough).

There are secrets, minigames, changes in dynamics, and large boss battles, too. These all work well and serve to spice up the action, with the possible exception of one: a DDR-style dance battle. Not that there’s anything wrong with dance battles, and it’s handled here with the same charm and sunny disposition as the rest of the game, but having Parappa the Rapper-style rhythm games on a console without coloured face buttons (we reviewed Pikuniku on Nintendo Switch) should frankly be illegal.

Other than that, the only other complaint anyone could have about Pikuniku is that there just isn’t more of it. (And yes, we appreciate the irony that, if you know any of team Thumbsticks at all, we frequently complain about how games should respect our time and generally be much shorter.)

But Pikuniku also includes one of the best features any game can have: the ability to go back and explore the world after you’ve completed it. Yes, that means you can go back and collect all the things and complete any side quests you might have missed. It also gives you chance to go and enjoy the freshly-saved, evil-free world, chat to the locals, and generally feel good about saving them all.

More than that, though, with nothing left to complete, We’ve just been firing up Pikuniku and mucking about. It’s just such a nice, wholesome, cheerful place to be, and has a wonderful effect on your mood if you’re having a bad day.

Pikuniku is an unbridled joy. It’s rainbows, ice cream, long weekends and kittens, combined and distilled into their purest, most potent form.