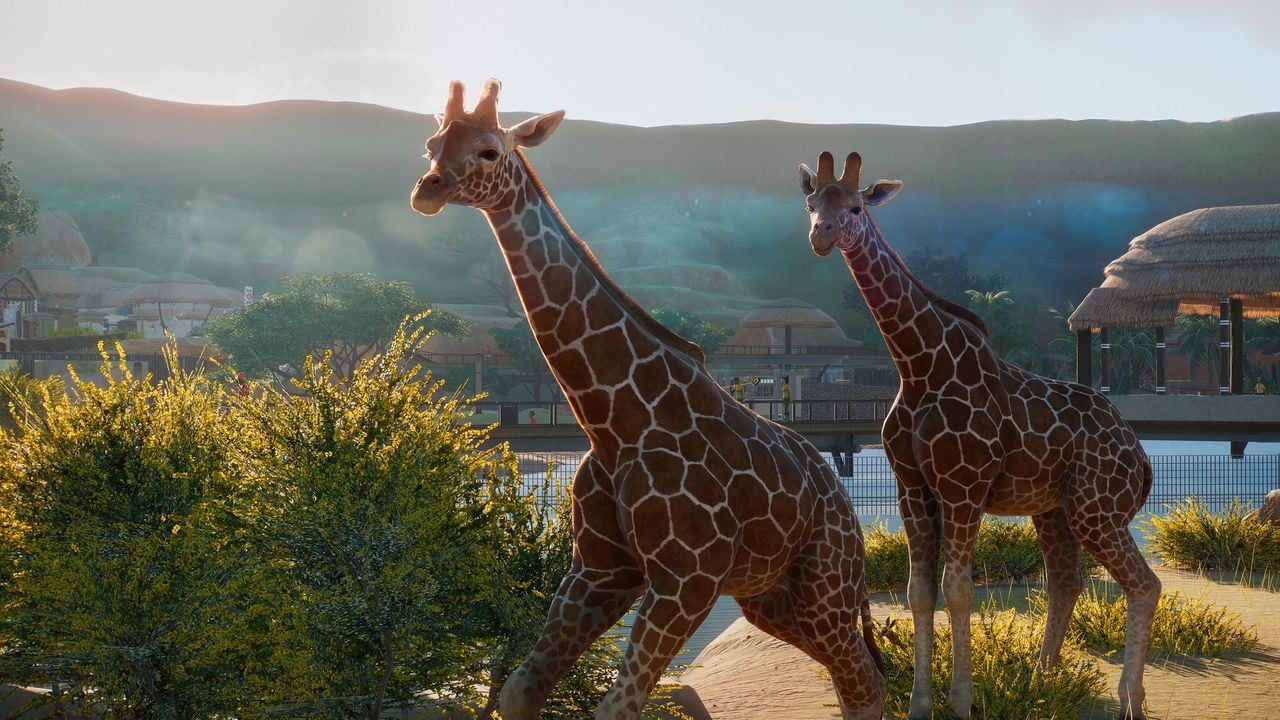 After over twenty hours building immaculate habitats, cultivating a seven-generation deep warthog tribe, and screaming at fences that won’t align to the exact measurements set out by my perfectionist brain, I can tell you with complete certainty that I love Planet Zoo. It’s a game overflowing with fiddly design options, dense management mechanics and a ridiculous number of bugs. (The software kind, not the insects.)

While that makes it hard to get to grips with, once you do, it quickly becomes a substantial tycoon experience that relishes in giving you limitless control. The devs at Frontier have been at the forefront of this niche sub-genre for quite some time, never have they created a zoo simulator that feels so flexible, freeing and open to experimentation as Planet Zoo.

I don’t use the term “zoo simulator” lightly, either. While ostensibly Planet Zoo is a colourful, cartoon game about building your own wildlife paradise, it’s also an intricate management simulator that can, at times, feel overbearing. Building enclosures and satisfying animals come with a wide range of criteria, and from the offset, Planet Zoo has no remorse when enforcing its strict standards. You’ll have to keep track of everything from hunger, thirst, and placing the appropriate terrain and plant life, to deeper needs, such as social group sizes, nutritional quality, enrichment values, exhibit temperature, and even guest visibility versus animal stress. Building exhibits isn’t as easy as simple as placing four fences and a water trough; you have to think about everything the animal your adopting truly needs.

On top of that, managing your facilities, the staff, and your finances play a big part in whether your zoo thrives. Treat your animals badly and a horde of angry protestors will descend on your establishment. Charge too much for tickets and your guests will avoid your zoo altogether. Decide to market your zoo with a risky advertisement slot, and you’ll be branded as an industry sell out. There are complex details behind every option available in Planet Zoo’s array of features, tools and game modes; so much so that some will be put off by its intimidating scope.

It’s only after braving Planet Zoo’s unapproachable opening hours that it becomes an outstanding tycoon game. Every foolish mistake becomes a learning experience. Each new exhibit becomes a new opportunity to play with the game’s extensive tools and features.

While, like me, you’ll probably sit racking your brain as to why your Siberian Tiger is giving you the growling equivalent of the middle finger, deciphering that he needs you to install coolers and reduce the temperature will teach you the importance of heat in future exhibits. Every new animal presents similar challenges, and after taking the time to learn the ins and outs of animal welfare, you’ll soon uncover the best ways to take care of specific animals as well as how to assemble enclosures that look great and function even better.

In turn, it also gives you deeper bonds with your park’s inhabitants. Not only has Frontier poured unmatched detail into its host of amazing animals visually, but it also takes the time to make their behaviour, reactions and interactions incredibly lifelike and authentic. Animals form hierarchies with alphas and betas, are shown ageing in real game years, and will take on different sizes and traits depending on their parent’s genes. It means that – after spending hours creating an enclosure that suits their various needs – it’s easy to become attached to your animals as they express so much character and individuality. Making the act of creating exhibits feel consistently diverse and exciting is something that even the best zoo tycoon games struggle with – I’m looking at you, Zoo Tycoon 2 – but Planet Zoo jumps that hurdle with ease.

From here, the game’s options only expand. You’ll mess around with construction, form immaculate interior enclosures, create treetop walkways for guests, and begin using your imagination to design brand new ways for customers to view your attractions. When you reach the point where Planet Zoo’s different tools click and work for you, it becomes a game that no longer feels impenetrably complex, but instead almost boundless in scope.

However, the game is littered with minute frustrations. Fences won’t intuitively move how you want them to; incoming alerts will inform you an animal is too cold because they’re sitting in the furthest corner of their cage; and one-way glass will refuse to rotate, leaving your lowland gorilla in confusion as he wonders why he’s staring at a group of perplexed humans. The game’s four modes also all come with their own blunders. The campaign lacks enough basic information for new players, while an online section known as Franchise Mode feels intentionally tedious.

The latter, which is how I spent most of my time with the game, sees you create a park online, breed animals and trade them for “conservation credits,” an excruciatingly slow-building currency that you require to purchase more animals. Buying a new exhibit costs so much that it can take in-game years to afford even one half of your new exhibit. Conservation credits show up to haunt the Challenge Mode as well (the offline alternative to Franchise Mode), and with Sandbox (a mode where everything is free to use) lacking the confines of any currency, it feels too shallow to enjoy.

Then there are the bugs, which are ever-present. Your park will generate an obscene number of refunds no matter what you do (rendering some playthroughs unsalvageable), while keepers will occasionally refuse to feed animals until they starve, and guests will complain that the zoo lacks any educational value, regardless of the effort you invest attempting to prove them wrong. These examples are only a small handful of the issues I ran into playing the game, and while it runs like a dream, it’s worth noting this still feels like a work in progress.

And yet, it’s all worth it for what lies at the core of Planet Zoo. While it easily could be another bland tycoon game that doesn’t make any effort to alternate from the formula, it instead becomes a dense and layered simulator that offers you the tools to play your way. There are undeniable bumps along the way, but when you finally start seeing eye to eye with Planet Zoo’s extensive set of systems, there are very few experiences so moreish in 2019.

Despite its unapproachable first few hours and some severely rough edges, Planet Zoo is one of the best tycoon games of the year. It offers near-limitless potential through its construction and exhibit tools, while Frontier’s visually stunning animals feel authentic and supremely detailed. With some patches, there’s no denying Planet Zoo could wind up being something extraordinarily special.