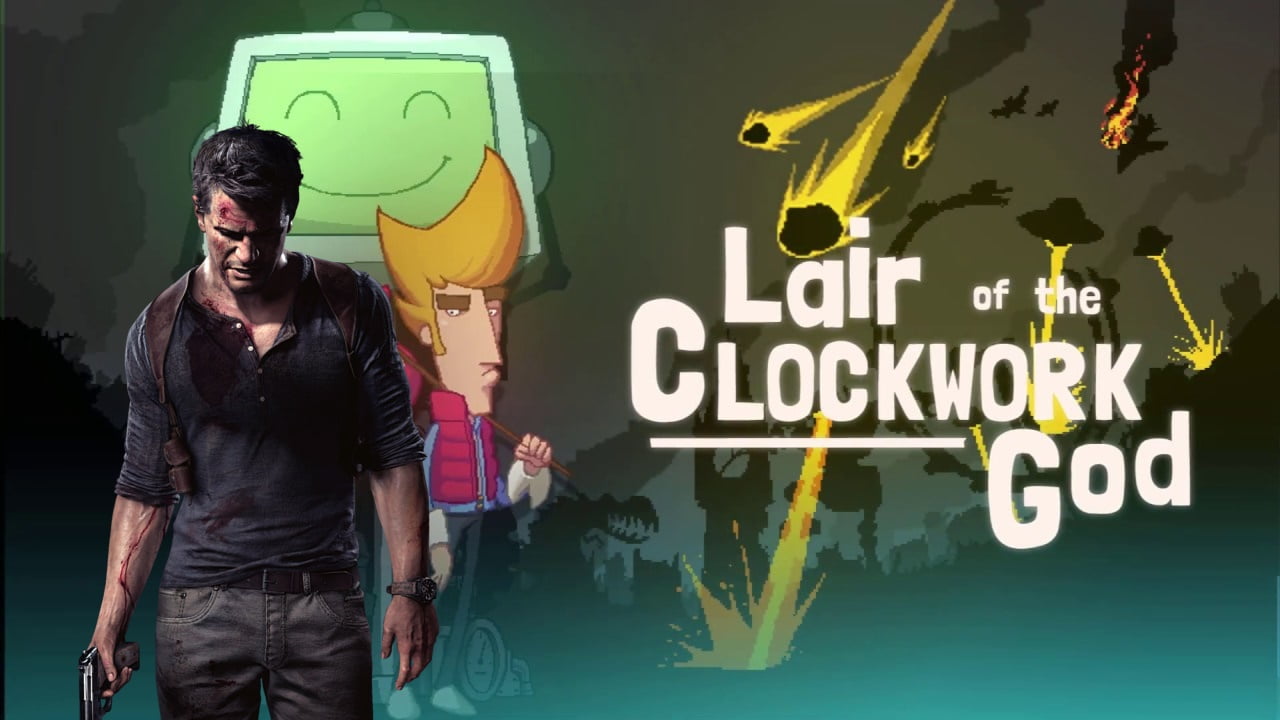 Dan Marshall, of Size Five Games, wrote a post for the PlayStation Blog that was – in his words – “TOO SEXY and DISRESPECTFUL” to publish. (And we thought you might like to read it.)

A couple of months ago, while doing promo for Lair of the Clockwork God’s Nintendo Switch and Xbox One release, Dan Marshall, of Size Five Games, wrote an article for a magazine that never went to print. While we were interviewing him for a feature for Thumbsticks, the subject of the spiked article came up, and we agreed to publish it. (On the proviso that Dan drew a Bulbasaur from memory, as he boasted he could in the piece.)

It turned out rather well, we think – the article, not the Bulbasaur – so when a throwaway joke on Twitter turned into the offer of another rejected article – this time from the official PlayStation Blog, announcing Clockwork God’s arrival on PS4 – we thought we’d give it a shot.

Do you want to publish the blog post I wrote that they rejected?

It's a bit weird with context, to be fair!

The offending article – and the accompanying context, which Marshall insisted on providing – are reproduced verbatim below. Read it for yourselves, and see if you can work out why Sony took issue with it…

Okay so, when you release a game, Sony lets you write a blog post. It’s basically promo, dressed up all fancy.

With a platform that big, I wanted to write something funny, something that might stick out and get shared around and help promote the game more than something drab that says “my game is coming out, here are some of the features please look at it”, you know?

So, I wrote this. In, like, twenty minutes flat. And I was pleased with it so we chanced our arm and sent it to Sony who immediately and, might I add ultra-politely, rejected it and requested something more “straightforward” and “dev-focussed”. So, I wrote a very dry one that no one read and it took me four hours.

I just thought it’d be funny to have the opportunity to promote my game to a HUGE audience and instead spend the entire word count banging on about someone else’s game. I mean, you can see why they wouldn’t want to run it, but it’s a shame.

So here it is on Thumbsticks instead. The TOO SEXY and DISRESPECTFUL blog post which was BANNED by Sony or however you want to frame it, just imagine you’re reading it on the official Sony Playstation website.

THE OFFENDING ARTICLE: “Nathan Drake: a true hero of our generation and my idol” by Dan Marshall

Nathan Drake’s amazing. Nathan Drake is a true hero of our generation. He’s handsome and brilliant and has this exceptionally wry wit, but the main thing about Nathan Drake is he’ll bust a cap into some goon’s knee so they fall off a balcony and onto some jagged rocks and… man, he just won’t even care. He’ll be like “heh, that looks like it hurt” and he’ll just move on. So cool. So cold. It’s a sight to behold, it really is.

And it’s not like he’s doing this to save the world, either. When Nathan Drake throws a grenade and three mercenaries are splattered over some nondescript bit of jungle, it’s not because these sinister mercs are trying to find some ancient gem that will rip a hole in the space-time continuum and destroy all life on the planet, or whatever… it’s because there’s lots of gold in it for Nathan Drake. That’s the mark of a true hero: doing what needs to be done in order to make lots of money so that someone a bit snide-looking doesn’t get there first. Classy.

Imagine that being your job. Imagine your job is to splatter men on trees for a living.

Also, when Nathan Drake is blasted off a castle wall by an exploding jeep and falls face-first into some dirt and several of his ribs crack and there’s some blood on his forehead, Nathan Drake will stand up and stagger for a bit while he does some wry diatribe, and within moments he’s shaken it off and is back to his normal running animation. His normal running animation! After all that! That’s why Nathan Drake is absolutely the sort of man I aspire to be.

Hello! My name’s Dan, and I want to be a hero, just like my hero Nathan Drake. I’m a big fan of jumping and running around and ideally having a big gun to shoot. My cohort Ben, sadly, is a bit more lame than me, because he’s like something out of Day of the Tentacle, from the past. You know the sort, always Looking at things and combining things in his inventory. Talking. Eugh.

Together, we got ourselves into a bit of a pickle whereby all the Apocalpyses are happening at the exact same time (you know, tornados, mushroom clouds, wasps with swords, angry witches etc) and we’re deep underground trying to half-heartedly find some way to reverse them.

I say “half-heartedly”, because, I mean… Yeah, it’s bad that everything’s gone to pot but… you know. I mean it’s a bit of a struggle, that’s all I’m saying. Just being alive right now, it’s not the easiest. So yeah, obviously we’re trying to stop it, but would it really be so bad if everything just.. ended? No. No, we are going to fix this, we’re going to stop them. We are, we really really are. Which is arguably more than Nathan Drake would do, he’d probably ride out an apocalypse sailing a pirate ship stuffed with gold on a wave of lava full of sharks.

Wait, what was I saying?

Lair of the Clockwork God comes out on PS4 on November 6th.

Dan Marshall runs Size Five Games, one of the longest-running indie studios out there. After making popular point-and-clicks Ben There, Dan That! and Time Gentlemen, Please!, they brought us the steampunk cybercrime burglary caper The Swindle, and daft football game Behold the Kickmen. Their latest, Lair of the Clockwork God is available on Steam and Consoles from today.