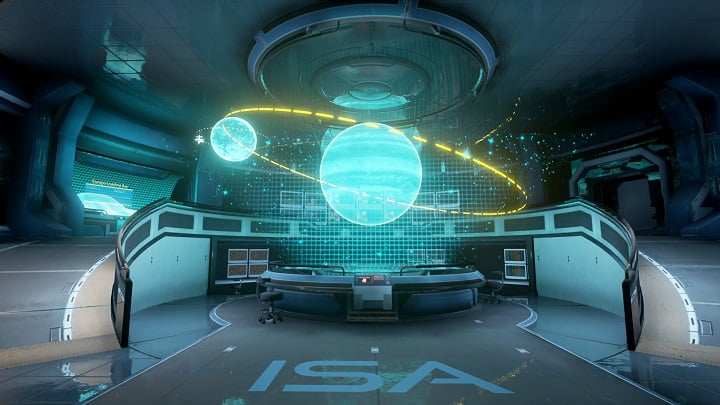 Science fiction tends to follow certain themes and preoccupations, no matter the medium.

Star Wars set the preoccupation with the space opera in movies, while Half-Life 2 made sci-fi dystopian settings popular in games. Recently, as computers become more and more complex, popular science fiction has turned its attention to artificial intelligence and its consequence on humanity; the film Ex Machina, the popular puzzle game The Talos Principle, and most recently, developer Bulkhead Interactive’s first person puzzle platformer, The Turing Test.

The Turing Test begins with the player character, the conveniently named Ava Turing, waking from cryogenic freezing onboard an exploratory spaceship over Jupiter’s moon Europa by the mission’s A.I., named T.O.M. Ava is informed that the other crew members of the vessel – a group of five scientists on a modular base on the moon’s surface – have broken off contact with the mothership. As a result, Ava is sent down to Europa to discover what happened to the crew. Upon entering the base, Ava and T.O.M. discover that the rest of the crew have reorganised the modular rooms to become a series of elaborate and increasingly complicated puzzles. The reason for the puzzles, T.O.M. surmises, is to prevent an AI incapable of lateral thought from moving from room to room.

These puzzles, obviously integral to the puzzle game experience, at first come off as derivative of its forebear, Portal. An artificial intelligence overseer talks to the science-gun wielding player character as she moves in a one-way trajectory through a series of rooms, that are completely blank besides the puzzle components that inhabit each chamber. So far, so Portal, and for the first third of the game, The Turing Test presents nothing revolutionary or extraordinary. Ava and T.O.M engage in some interesting dialogue, and the puzzles themselves are fun and challenging, but not frustratingly difficult. Meanwhile the game’s narrative and the mystery of what happened to the crew are intriguing, but do not completely justify the reasoning behind the puzzles.

For this first section of the game, the most interesting parts were the optional puzzle rooms that sometimes branch off from the hallways in between each level. These optional rooms tend to be more difficult than the main puzzles but reward the player with information regarding the backstory to the characters and in some cases, philosophical texts about the nature of consciousness and immortality. Because the main gameplay looks and plays significantly similar to other puzzle games, these optional rooms are infrequent areas of respite from sometimes tedious levels.

Nonetheless, The Turing Test is never boring. An ambient yet wonderful soundtrack allows the player to immerse themselves in the puzzles and calm mystery of the game. In some high-tension sections, the music becomes more prominent, but it never distracts from the gameplay. In other areas, however, the music is outright haunting and becomes far more memorable than the puzzles it accompanies.

Because T.O.M. and Ava’s dialogue is the main source of speech in the game – other than a handful of voice recordings scattered around the levels – I was worried that the two would become distracting during difficult puzzles. However, the voice acting is thoroughly competent throughout the game and keeps the player immersed in the characters with every line. The recordings that the player can find also tie into an important subplot of the game: what the other scientists had been doing to result in their disappearance. This entire story is delivered exclusively through terminals the player can interact with between puzzle levels, but they are all acted well enough to avoid being tedious to listen through.

The most immersion-breaking parts of the game were the loading screens, which sometimes occurred without warning, even interrupting lines of dialogue that were then never completed. It was fairly annoying to have completed a level and proceed to the exit, only to be rewarded with a fragment of a voice line that is never completed. Still, this only happened a handful of times and only when sprinting through the exits. Players who take their time will most likely be able to avoid the problem, but unfortunately the only way to hear those lines of dialogue if you miss them is to reload the level and complete it again.

I keep mentioning the difference between the first portion of the game and the latter portion. Without spoiling too much of the story, there is a plot twist midway through the game that utterly propels The Turing Test from a good puzzle game to a great narrative work. T.O.M. and Ava’s interactions become suddenly more meaningful, while the gameplay serves the premise in ways that change the story from being good science fiction to a profound work that examines, among other things, the nature of control in a video game.

Perhaps it would be better if The Turing Test focused its efforts on only a few of the subjects it delves into. As it stands, however, the game provides extremely competent dialogues on classic science fiction themes – the morality of immortality, the ethics of experimentation, the nature of consciousness, and the meaning of free will. The Turing Test almost stretched itself too thin across this myriad of subjects, but the overall experience is still worthwhile. The game expertly intertwines and relates each of its philosophical discourses to form an experience that leaves the player thinking, far more perhaps than its puzzles ever do.

The Turing Test might not stand out from the shadows of its forebears, but to be fair, the likes of Portal and its sequel are tough acts to follow. Where it sometimes falters as an outright puzzle game, the stellar narrative takes over to stretch the player’s grey matter, especially in the second half. After all, leaving you thinking is the best possible result for a work of science fiction.

Daniel is a student at Trinity College, Connecticut, and has turned a love of playing video games into a passion for studying them.