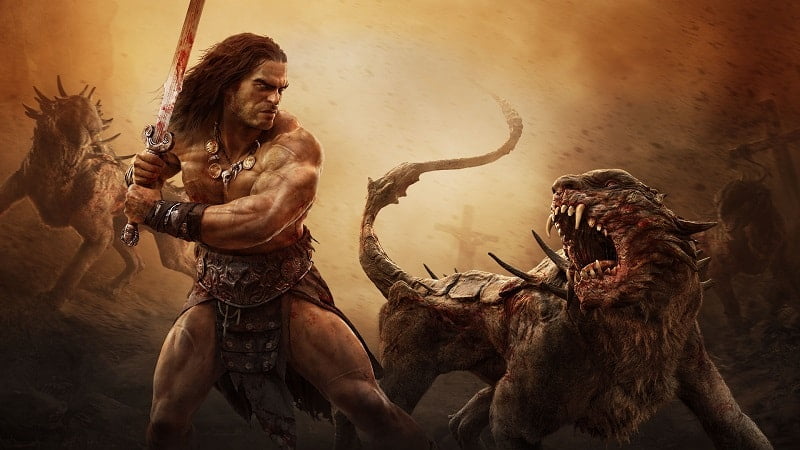 We went to visit developer Funcom in Oslo to see how Conan Exiles is coming along since its early access release in 2017.

There is a set of revolving doors in Oslo airport so wide and fast-churning, so requiring of synchronised teamwork, it felt like navigating a puzzle in Brothers: A Tale of Two Sons. Underfoot, frozen sheets crack, sending fragments skittering with the same hollow plastic timbre as LEGO bricks. The Akerselven River, “Oslo’s green lung,” runs through the city centre, black water lapping against stopbanks of dirty ice. You can see The Longest Journey everywhere, a shifting balance of Stark and Arcadia in its architecture. It feels as if play and the Nordic landscape are inseparably intertwined.

You wouldn’t know it to play developer Funcom’s Conan Exiles. The open-world survival game spirits players to Robert E. Howard’s Hyboria, a prehistoric land of myth and monsters written to flare the imaginations of readers of Weird Tales magazine, where it was originally published. Playing Conan Exiles, you can see why they were agog. It’s wildly varied biomes draw from Frank Frazetta’s iconic artwork: montane regions, paper white below pale blue; dense green jungles draped with cobwebs, chitinous creatures scuttling by as big as men; Hadean deserts, swept by sandstorms and adorned with bodies on crucifixes.

And that’s where your adventure begins. Plucked down from the cross by the eponymous man himself, you create your barbarian of choice – a droll process involving excrescent muscles, pendulous manhood, and wobbling breasts, all recalling Frazetta’s eroticised bodies – and are loosed upon the world to thrive by any means you can. Usually the brutal kind.

In contrast to Age of Conan, Funcom’s 2008 MMORPG, Conan Exiles incorporates survival mechanics and a sandbox with which to craft, scavenge, and build. None of this is news to players that hopped on board in January last year, when it entered early access. Those folks did some extensive QA work – and paid £27 for the privilege – in what was a promising game blighted by bugs and performance issues.

Ahead of its May 8th release – which will see the price rise by another £10 – Funcom has been very busy indeed. Faced with a long list of jeremiads from the game’s faithful, the developer has made, according to creative director Joel Bylos, “Over thirty-two major updates,” and “Patched over a hundred times.” Bylos, sapped and smiling, said, “If I look a little tired, it’s because I’ve been awake till four o’clock every day this week.”

The studio’s nocturnal energies have yielded plenty of offerings at the altar: the map has been doubled, the combat system reinvented, farming, fast travel, a new religion, and fresh cosmetics all furbishing the game since its initial release. But it isn’t just its fans that Funcom looks to please; with the game leaving Xbox Game Preview, and now seeing life on the PS4, a bigger push is being made.

A shift from first to third-person has thrown open the curtains and given brawling a brighter, more nimble feel, evoking That Which Shall Not Be Named: “I don’t want to use that word,” says Bylos. “I don’t want to reference that game, so I’m just going to say we’ve changed it to a third-person action combat style system.”

Dark Souls is indeed best not invoked, not just for its ubiquity, which has long since passed into cliché, but because to do so wouldn’t flatter Conan Exiles. There is, alarmingly, something of Age of Conan in this game’s combat: it’s immured in the Rock ‘Em Sock ‘Em Robots style of many an MMORPG. Stand-and-click until your enemies are driven before you.

There is a lock-on, allowing you to prowl around your mark; there’s a slightly sticky block function; and there isn’t so much a dodge mechanic as an ejector seat. It’s the sort of panic button you wish you had in Dark Souls’ most frantic near-death moments, but it doesn’t open your enemies to countering; it catapults you down the road, and by the time you close the gap, they’re swinging for the fences again. An improvement that needs improvement – Conan Exiles’ mantra at the moment.

The survival genre is built on divagation. Those dials and bars you’d keep an eye on in other games require two here. Collecting resources and crafting become the ends as well as the means. The perishable juggling act makes your eyes stray from the world in front of your face.

My instinct was to ignore my barbarian’s thirst and hunger, delay his green thumbed compulsions, and go adventuring. Thankfully, the most winsome feature is borrowed from a game Bylos is less hesitant to mention: “You’ll find world traversal very natural when you learn to just jump and grab on to things. Let’s just say I really liked it in Zelda!”

All the better to explore the swamp – one of two new areas slotted onto the map. Chief of Hyboria’s pleasures is the eco-fantasy it delivers, a land of unchecked nature and monstrous growth, beautiful in its extreme way. The swamp is just such a place: a muggy paradise of unravished greens, damp carpets of moss, and Khmer stone temples piercing through the vegetation. True to Bylos’s word, you can scale this terrain as much as your ebbing stamina bar allows.

It opens the world’s vertical dimensions, allowing you to build bases on craggy, uneven ground, and climb wherever you like. It is, as is much of Conan Exiles at the moment, hampered with spasmodic movement – as though your barbarian is stuck with electrodes. The summit of a cliff face is an inappropriate place to perform the funky chicken.

When you do carve out a homestead for yourself, there is now a farming system for you to get stuck into. It’s quite a prospect: a barbarous savage prettying up home base as if Tom Nook might swing by to inspect. On farming, Bylos said, “‘Doesn’t really fit in a Conan game,’ people would say. I say you’re probably correct, but we thought it would be good for people anyway.” It’s a matter of finding seeds throughout the world and prodding them into pots and basins, et voila! Bylos also enthused, “They visually grow over time, which is quite nice.” Can you imagine Schwarzenegger watching his plants coming along?

Life at the ranch is helped along by your loyal ‘thralls,’ which have been broken on the wheel of pain (Dale Carnegie didn’t cover that one). Essentially, they are slaves that you can collect and put to work. Your pile will need protecting from The Purge, a horde style event where undead mobs will converge on you causing a nuisance. Fending off the horde takes planning and strategy, and you stand to lose a wall or two of your house.

PVP battles are a similar affair – plotting your defences, weighing up tactics and trebuchets, and coordinating your effort with friends or strangers online. My time in PVP yielded the same feeling as with much of the game: potential scuppered by performance. It still suffers from general jank, some irritating rubber band glitches, and combat wants for precision and weight. There is enough here to sweeten the pot for the faithful, but there might not be enough to win over new crowds, especially given the £54.99 price tag on consoles.

After a frozen start last January, Funcom has been devotedly chipping away at Conan Exiles with a steady trickle of new content. Despite its improvements and upgrades, there is more quality of life work needed in hope of a good thaw come May. There’s something of that Nordic landscape to it after all.