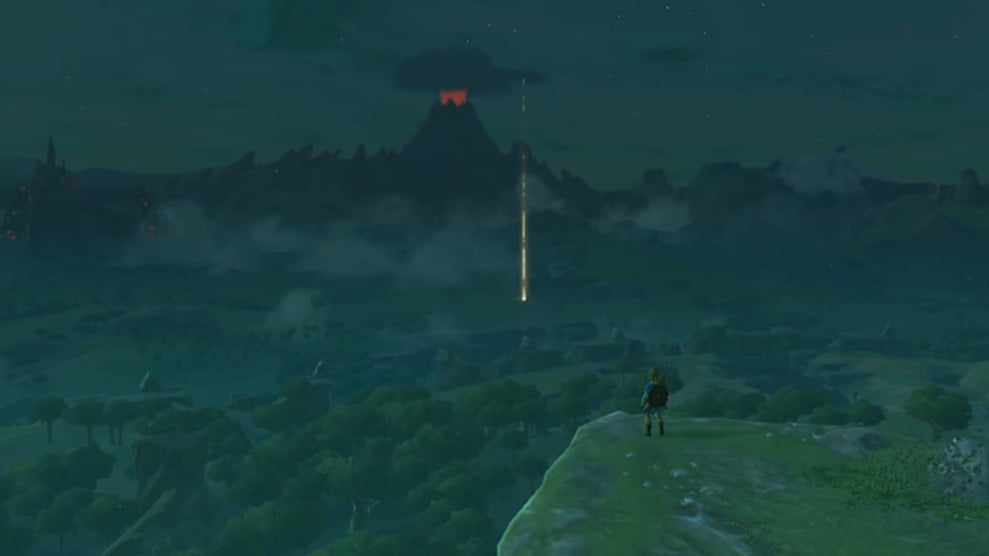 Breath of the Wild reminds us of Arthur C. Clarke’s third law – that any sufficiently advanced technology is indistinguishable from magic.

Breath of the Wild has unspooled the swaddling cloth Nintendo wrapped around its thirty-year-old keystone franchise, and in its refusal to score the familiar groove orchestrated by its forebears, it journeys outside of the medium, and at times outside of itself. The art and design of Breath of the Wild speak to influences gathered from far and wide. The game’s director, Hidemaro Fujibayashi, has pulled threads from the old masters to weave a tapestry entirely of the new. Borrowing from legends, he manages to explore the way that we play games, by taking us outside of them.

The Plateau is the thing

At first it’s all too familiar: rolling green hills, crumbling ruins on the horizon, creamy morning mist, a foreboding mountain in the distance. It isn’t long before you see the edge of this vista, and the sheer drop to the expanse below. The Great Plateau is where you’ll cut your teeth and steel yourself for the real adventure waiting down there; it’s a microcosm. It’s also a ghost of our memories of Hyrule Field from all those years ago in Ocarina of Time. The plateau presents the world we once thought of as huge, only now it’s an island in a vast sea. It’s a nod to the series’ past wrapped in the promise of its present, a beautiful piece of statement-by-design.

But it’s also something more. It’s as if you’re being asked to consider the map, not the game’s map, but the idea of the video game map: rendered and fixed in position, floating in the void space. That sheer drop at the edge of the plateau becomes more than a deadly fall: it becomes the edge of the game, the edge of the stage.

In Shakespeare’s Hamlet, the idea of the play within the play was born. The titular prince hatches a scheme to reveal his treacherous uncle’s misdeeds by writing a play depicting them. Shakespeare hatched this Russian doll set-up to pick apart the power of the play, to hit upon the truth of it by wrapping it up in a layer of lie. Fujibayashi presents us this map within a map; he raises it up to us, and in so doing, steps into the role of another character from the Bard’s back catalogue: Prospero.

The Tempest is a play about plays, and the creation of stories. The character of Prospero, a sorcerer and master manipulator, is an analogue for Shakespeare himself, shaping the story using magic and guile. It’s this role that Fujibayashi inhabits here, wielding a variety of spells to fragment and explore the way we play and think about games. And sure enough, if we take a close look at some of the aesthetics, we can see a discreet battle is raging.

The War of the Worlds

I first noticed it when I was set free in The Great Plateau: the fragmenting of time and place. The game raises its curtain in a cold metal chamber, before having you walk out into a lush pastoral playground. This early juxtaposition scrambles the sense of setting; there’s technology in and amongst the natural world of bonfires and bows. Where are we?

During your early wanderings you encounter the Temple of Time. It stands in faded Anglican splendour, eroded by its namesake, its bones and spines exposed here and there by dereliction. Intruders lurk. Outside the temple door, and camouflaged in the same mossy, brown decay, lays two corpses. They don’t belong. Their coiling copper tendrils twist away from rusting carapaces and recall immediately the mythic tripods from H.G. Wells’ seminal science fiction text, The War of the Worlds. It’s a vibrant clash of imagery: far-flung futuristic science-fiction meets rural medieval fantasy. And it doesn’t stop there.

Technological imagery snakes through Breath of the Wild like a live wire. You can see it in the concept art: outlandish creations that would never have seen the light of day, floating in the collective consciousness of the game’s designers. It’s there in the Sheikah Slate – the game’s signature item is basically your very own tablet; it’s there in the UV glow of the shrines; and as you wield the Slate, it’s there in the sharp, angular towers that burst from the ground. Odd little digital readouts on your HUD tell you the temperature around you, and how much noise you’re making.

This visual clash between the natural and the digital distorts the game’s sense of aesthetic place. It’s reminiscent of that first trailer, a decade ago now, for Assassin’s Creed. Amidst images of Damascus and the ancient world, that flicker of electronic distortion bled through and threw us off kilter. It seemed as though the game was revealing itself, exposing the code and trickery behind the slick veneer. It breeds an odd sense of detachment both within the game and without: Link feels separate from his surroundings, and so too do we feel an uncanny self-awareness.

Never the Twain shall meet

Playing off our expectations, Fujibayashi flips the classical magic of Zelda’s past for a distinctly scientific wizardry. In place of magic musical instruments and spells are forces like magnetism and temporal distortion – things we would equate far more with science fiction than we would with fantasy. It’s an odd feeling.

You feel alien and powerful, as if you’ve arrived from the future. Mark Twain toyed with this same notion in A Connecticut Yankee in King Arthur’s Court. In it, an engineer is transported back to the time of King Arthur. Once there, he uses his knowledge of modern technology to fool the denizens of the court into thinking he’s a magician. The quiet epiphany is that in essence he becomes one, making fireworks, demolitions, and upstaging Merlin using a make-shift lightning conductor.

Twain’s suggestion was that a lack of understanding made magic of mere technology; his master stroke was revealing the magic at the heart of technology. It’s a similar concept to Arthur C. Clarke’s third law – that any sufficiently advanced technology is indistinguishable from magic – only it suggests a deeper connection between the two: an equivalency.

Fujibayashi similarly blurs the two concepts with Breath of the Wild. More than this, he plays with the deeper notion that the wizardry of Zelda is wrought from artifice – the artifice of game design. He exposes himself in essence: he is the one behind the curtain, pulling the strings, but despite the exposure the spell is undiminished.

Because how exactly does he ask us to respond to his subtle reveal? As the plateau shifts from playground, to playhouse, to prison, we are asked to take a leap. The only way to leave is by air and we have a shiny new hang glider. We fulfil our self-destructive urges and dive off the edge of the world, of the game as we know it. Only here, that’s where Fujibayashi begins, exposing the vaster game world below. Though we’ve seen behind the curtain, he dares us not to fall under the spell all over again. And we do.

It isn’t the first time he has flirted with Twain either: Phantom Hourglass‘ steam-boat was a call-back to the adventures of Huckleberry Finn and Tom Sawyer surging up the Mississippi river on the iconic paddle-steamer. In Breath of the Wild, the homage to Twain serves a more cerebral purpose than the evocation of romantic imagery, but it bears no less heart.

Gone is the cynicism that so often accompanies post-modern irony and self-awareness. Instead, we have a sincere embrace of game design, and a celebration of our willing surrender to it.