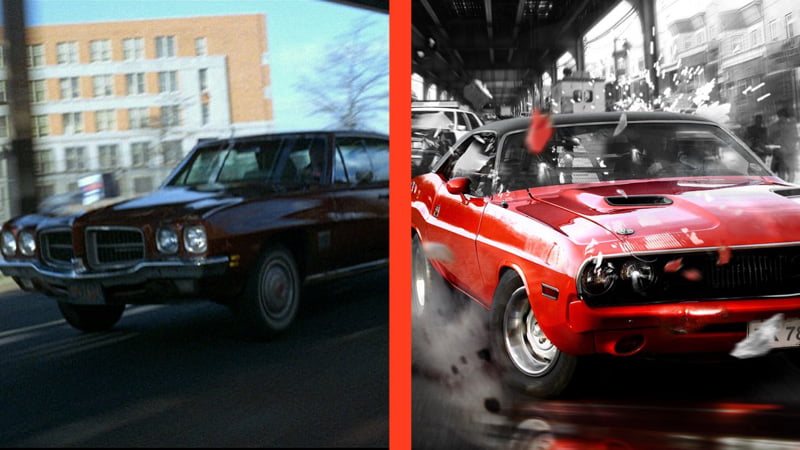 Cut Scenes is Josh Wise’s regular column on the intersection between films and video games. This week, it’s Driver: Parallel Lines vs. The French Connection.

I see a gamer in Hackman even then. Look at the way he slaps his palms against the steering wheel, wailing on the horn with gritted teeth, desperately trying to get bystanders to clear his path. It’s just like the way I grip the controller in anxious frustration, careening through cardboard boxes and chain link fences with my eyes transfixed on the train as it effortlessly keeps distance despite all my sound and fury.

Anger and obsession fuel ‘Popeye’ Doyle’s dogged pursuit of an L-train in The French Connection. For me, playing Driver: Parallel Lines, it’s my character T.K.’s ragged thirst for revenge, and my ludic confines – I have to beat the clock – giving rise to white knuckles and gritted teeth. The mission is called ‘The Mexican,’ and it’s a love letter from Reflections Interactive to William Friedkin’s classic ‘70s crime thriller.

It’s set up really rather well, too: you must follow your mark as he flees on the aforementioned train, with you in your car, and there isn’t any specific route that you’re charged with – you’re free to attempt anything you like. What’s remarkable is how the game maintains the feel of the iconic chase in The French Connection despite offering you the liberation of play. The clues as to why this is case lurk in Friedkin’s frames.

Skip to 3:16 and you’ll notice a marvellous cut. As Doyle swerves away from a truck cutting into his path, the queasy camera whirls round and lurches into cross-traffic. Amidst the shrill cry of car tyres we cut and pivot to his brown Pontiac LeMans as it slices cleanly away into a miraculous open lane. This is a curiously curated moment. Friedkin seems to be playing a game: using his directorial powers, he cuts from one image to the other, pulling Doyle out of immediate peril and prolonging the tension of the chase. It’s the same role the player falls into with Parallel Lines.

Now to 4:56 and you’ll notice the breathless parallax shot that epitomises the chase in both film and game. Doyle is forced into choosing an alternate route to keep his prey in his crosshairs; you are afforded the very same freedom. Friedkin crafted the entire set-piece with an eye for harsh sound, staccato cuts, and a kinetic thrill; it’s in this shot that we are given a moment to breathe before diving back in for the kill.

In Parallel Lines, you are given the option to craft your own scene: do you opt for the rising simmer of tension as you carve your own hunting route, or do you instead go for the jugular, hounding the train underneath the gloom of its suspended track? In a triumphant touch, Reflections Interactive gives you the option to actually screech your way onto the track, truly rivalling the metal behemoth in a moment that dials things up to eleven and embraces a more garish set-piece thrill than Friedkin would have deigned to commit.

Homage is one thing, but Reflections Interactive not only paid tribute to a near-mythic piece of cinema, they tapped into what made it so breathless, and married that with play in a way that felt both liberating and constrictive. In a huge city teeming with possibility, your dogged determination narrows your sights to the elevated temptation dangling ahead; you’re a greyhound on a track, but the director of your own chase.