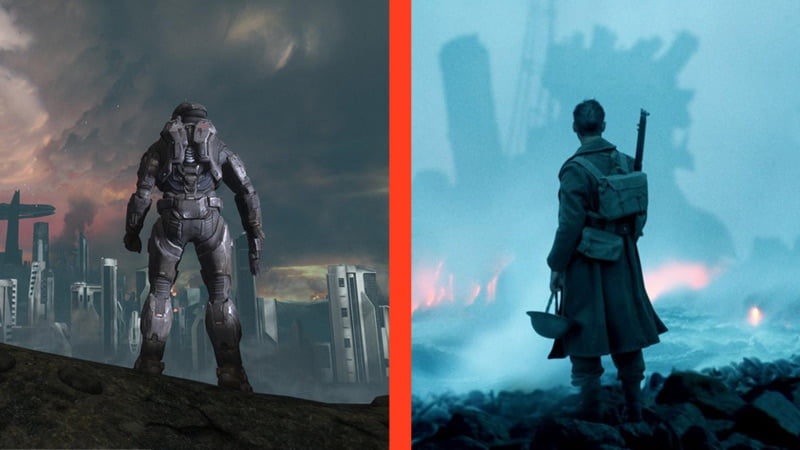 Cut Scenes is Josh Wise’s regular column on the intersection between films and video games. This week, it’s Halo: Reach vs. Dunkirk.

Halo: Reach, with its purple aliens, iron-pumping space marines, and military-industrial pomp, should feel well and thoroughly like an American blockbuster. It should be Heinlein by way of Cameron, Philip K. Dick via Verhoeven. But it doesn’t. It carries on the burdened shoulders of its campaign a particularly British feel. Only the British, after all, would take such pride in simple survival, salvaged from the clamping jaws of oblivion. With Dunkirk, Christopher Nolan captured – in a great, whirring, ticking mechanism of movie – the glory of the narrow escape, the fated defeat looming over the picture like the Damocles of dramatic irony.

Land. Sea. Air. Such is the trinity of war, and the trident of Dunkirk’s narrative. Both film and game are in thrall to the machinery of combat, the detailing of the apparatus that spirits us to the skies, the seas, and across the beaches. Aside from Tom Hardy’s eyes, burning behind his goggles, the majority of Nolan’s gaze during the aerial sections falls on the dashboard: the brass and engraved glass of the dials and fuel gages, the cross hairs as they catch the sun. “Rolls-Royce Merlin engine,” says Mark Rylance’s Dawson, as he hears the spluttering purr of spitfires overhead. “Sweetest sound you could hear out here.”

Reach draws on its fandom as much as its history. “Remember Reach,” runs the game’s tagline, trusting that you will hold the pulp of its plot in your heart. When the game opens, it’s difficult not to feel the swell of recognition – nay pride – as the familiar machines of the UNSC come into view. It begins with the rumble of Warthogs, sweeping skywards to take in the swoop of Falcons, before putting boots on the ground for the opening briefing.

Reach‘s scattered war scenes are thickly cross-hatched, each stroked brushing against the next to sketch a rounded view of the operation. One late-game mission, Long Night of Solace, takes us for the first time into space, piloting a UNSC Sabre and stabbing upwards into the atmosphere. The coordination of the mission, with command streaming into your ear, instils the same panicked need for order that Nolan manages in his dog fight.

As the three spitfires break formation to evade the German Stukas, they remain tethered through radio comms, orchestrating their own strategy in real time. What’s so thrilling about the spectacle is that all around is death: the sea below, cast impossibly wide with Nolan’s IMAX cameras, the sky above, and the enemies closing in like birds of prey. In Long Night of Solace, the void of space sucks at the ship’s windows, as you join with UNSC forces in defending Anchor 9 station and the heavy frigate Savannah. The need for calm and control is punctured with sallies of scarlet laser fire as the covenant Banshees get on your tail.

Down on doomy soil, most of the battle is waged not with the deflating sense of defeat, but with the doughty spirit of defiance. In Dunkirk‘s beached scenes, as German attack planes dive down and loose their bombs, men stand with their backs turned; there’s nothing they can about their situation, so they turn away and wait for the fates to deliver them. After enough time passes, they do. The arrival of The Little Ships, along with the Royal Navy, signals the saviour of well over 300,000 soldiers.

For Reach‘s hero, Noble Six, the Mjolnir battle armour allows a greater degree of resistance. The final mission, Lone Wolf, sees Six abandoned at the ship-breaking yards after the UNSC Pillar of Autumn has made its escape. With nothing else to achieve, having enabled the UNSC forces to regroup and prepare for war, Six fights in vain. It is a similar act of heroism in the face of certain defeat to Tom Hardy’s Farrier, in Dunkirk.

Toward the end of the film, he has no fuel left in his plane’s tank, and glides his way along the beach, fending off the last German planes from attacking the evacuation’s last stage. He brings himself level with the beach, surveying the battle lost, and lands softly. As he is captured, Nolan keeps the camera in close-up on Farrier’s face – partly to obscure the German troops from view as they capture him, and partly so we can see his eyes look to future victory.

It recalls the close-up, in Reach, of Six’s helmet: an orb of a bullet-hole in the middle of the visor, half-buried but not forgotten, the scene shifts to the future, the dust and soil replaced with grass. The real rescue, after all, wasn’t one of evacuation; it was one of sacrifice. Remember Reach.