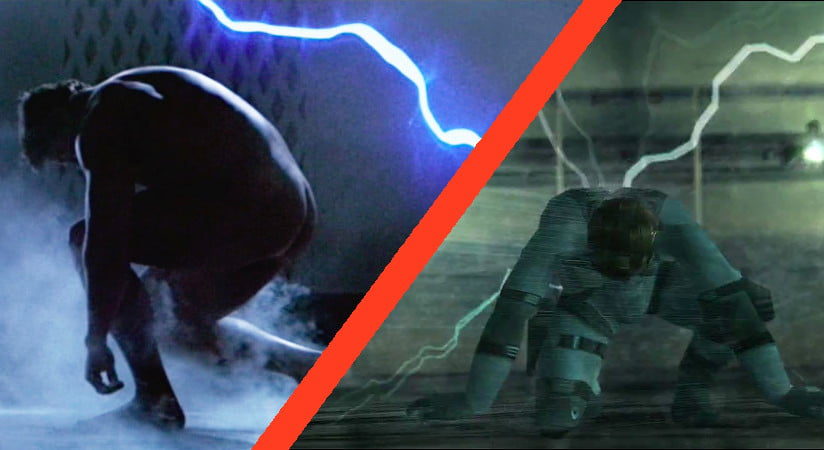 Cut Scenes is Josh Wise’s regular column on the intersection between films and video games. This week, it’s Metal Gear Solid 2 vs. The Terminator. Not literally, of course!

Kojima breathes cinema, and his work is cast in the light of mythic reels. Sometimes it’s imagery for the sake of homage – Solid Snake is lifted almost wholesale from Escape From New York and its hero, Snake Plissken; other times, images and ideas are borrowed to communicate the ineffable. One such example of the latter is in the opening minutes of Metal Gear Solid 2: Sons of Liberty.

Leaping from the George Washington Bridge, Solid Snake sails through the air above the Hudson River and flickers out of sight like an open flame caught in the wind. Glimpsed only partially beneath his rain-proof cloak, it’s here, at 2:32 in the video, that Kojima frames Snake’s true arrival in the game. The stealth camouflage (itself a fleeting homage to Predator) malfunctions in the rain, and as it de-cloaks him, Kojima lines up his frames with James Cameron’s.

The shape closely aligned with time travel, the circle, is one that Cameron distils in the arrival scene in The Terminator. A cold birth, one without screams or pain, the naked man standing before the flat, silent city: the machine, birthed by man, arrives to end man and break the circle.

The visual symmetry in these scenes speaks to their purpose: the superimposition of a warrior out of time. Fired like a bullet onto an alien landscape, electric bolts splay out like the spider-leg cracks around a bullet-hole in glass. The electric light and heat of the time travel portal is reflected in Snake’s camouflage, birthing him into his environment with crackling energy. He crouches prone, just as the terminator does, his posture embryonic.

This superimposition is literal in the case of The Terminator; in Metal Gear Solid 2, it takes a different tack. The scrubbing of context aligns the warrior with the player, his focus singular and unwavering. At 0:57 in the second clip, this focus is mute and deadly as the terminator surveys its new battlefield.

In the case of Metal Gear Solid, the idea that Snake lives out of time, out of context, is one embedded in the series’ makeup. Shifting politics, atrophied loyalty, and the aimless life of the soldier, the mercenary: MGS is a series chiefly concerned with context and of the struggle for individual identity independent from it. Snake arrives on the tanker a member of Philanthropy, a non-governmental organization with an anti-Metal Gear purpose. He has split from his unit, a man without a nation, with loyalty to himself and a purpose of his own devising.

There’s a subtle reversal of technology in the two scenes as well: in The Terminator, a machine of terrifying power, efficiency and advancement arrives in a simpler time vulnerable to its lethal will; in MGS 2, it is technology that fails, denying Snake the power to render himself invisible. He is stripped of his almost supernatural advantage.

Having that stealth camouflage broken returns Snake to a simpler time: it takes him back to line-of-sight stealth and to his origin on the MSX in 1987 – only two years after The Terminator was released. It serves the purpose of play as well: giving the player an unnatural advantage from the off wouldn’t be fair or fun.

Keeping players, and the series’ hero, grounded in their element, Kojima makes both a smart mechanical decision and an incisive point: don’t become dependent on technology. If only those at Cyberdyne Systems would have listened.