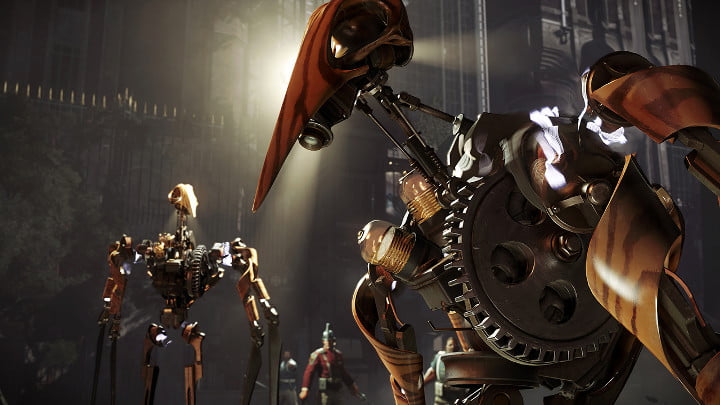 Bethesda’s latest sneak-em-up has gone gold. Here are the details of the Dishonored 2 system requirements, pre-load dates, and the obligatory day one patch.

Bethesda have been upsetting people lately with how they’re going to be handling review copies of their new games in future. TL;DR: they’re following the model they trialled with Doom earlier in the year, and not sending them to press until the day before launch.

Perhaps announcing that policy change in amidst its two major autumn releases – the Skyrim remaster and Dishonored 2 – could be seen as poor timing. Most likely, Bethesda intentionally made the new policy official just in time for those releases, to avoid the sort of predictions (that the game must be terrible) that inevitably follow late-arriving review copies, just like it did with Doom.

In any case, the show must go on. Bethesda have celebrated their latest release going gold with the obligatory tired-but-happy wide-angle shot of the entire project team, with someone clutching a freshly pressed disk in their grubby mitts, and by dropping some important information: specifically, the Dishonored 2 system requirements and pre-load dates.

They’ve also added the following caveat to the pre-load dates, specifying that a Dishonored 2 day one patch will be available:

Please note: There is an update that will download and install before you play the game. Before you play, remember to make sure that you’re online so you get the update.

Of course there is.