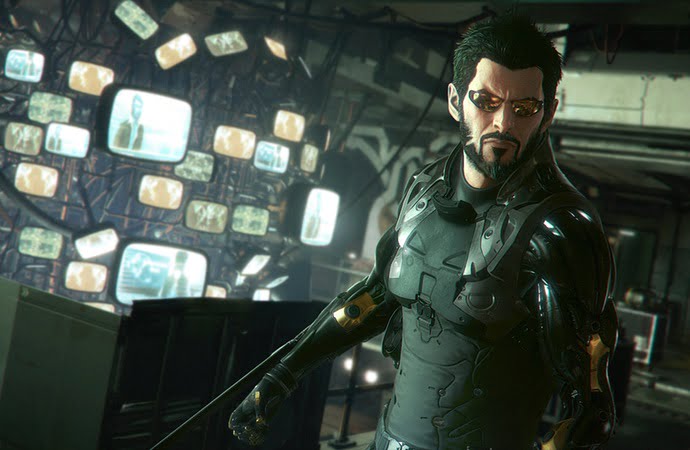 The last Deus Ex was too much of a challenge for me. The mantra of ‘play how you want’ was heard everywhere, but try as I might I could never get the game to be the stealth experience I wanted. Each mission would rapidly descend into carnage as my skills hit a brick wall. Rather than being a super agent, I felt more like Octodad on a work-exchange. I could never work out if the problem lay with the game or me, but there was always a gap between my intent and the reality. I would never have passed my probation at Sarif Industries

I wonder if this was common feedback, as during the thirty minute E3 demonstration for Deus Ex: Mankind Divided there were obvious attempts to bridge that divide and bring us Octodads back to the fold.

Set in 2029, the game finds Adam Jensen working for Interpol. The franchise’s knack for foggy exposition remains intact during a length introductory sequence that slowly introduces the game world before concluding with a terrorist attack at a Prague train station.

The jump in generations has brought with it some exquisitely design environments. The clean lines of Human Revolution are now replaced by an aesthetic reminiscent of films like Children of Men or District 9. The world looks used, tired and frayed at the edges.

As with the previous game the architecture itself is outstanding, this time featuring much more verticality and detail. Eidos obviously understand that real-life cities don’t appear overnight, but grow gradually with each passing year, and this feels apparent. The augmentation of the game’s world is a nice counterpoint to the themes of the game. And it looks like a tangibly shitty place to live, too.

Once control is handed to the player, it’s business as usual. Even in this pre-alpha state it’s clear that much effort has gone into improving the speed and movement of Jensen. He is a much more graceful protagonist this time round, darting between cover with an efficiency I could never achieve in Human Revolution.

It’s here that we see how that gap between stealth and action has been bridged. A range of new augmentations support a stealthy approach but are implemented using traditional action mechanics. In one example EMP ammo is used to dispatch cameras or, in grenade form, shut down turrets.

Another example, which may not please purists, is the Tesla augmentation – a ‘non-lethal’ electricity strike that can incapacitate up to four opponents. Basically, you get to be Emperor Palpatine. And it looked pretty lethal to me.

The most viscerally satisfying addition to armoury however is the Nano-blade. This projectile can pin enemies (or rather, their bodies) to a wall or, alternatively, embed itself into the environment and explode, causing death or distraction to those nearby.

We were also shown the improved hacking mode which now includes fog of war. Hacking was an aspect that I didn’t care for in Human Revolution and I doubt these changes will do much to reduce the sinking feeling I get whenever a sequence begins. That said, it’s obviously a popular element and other attendees at the demo seemed enthused. One guy even said “Wow,” which seemed a little much.

Unfortunately the demo build hit a few snags just as it was coming to an end, meaning we didn’t see the climactic shoot-out. It didn’t matter, as by this stage I was already impressed.  The game is shaping up nicely and I will certainly be dipping a tentacle back in the water when it is released in 2016.