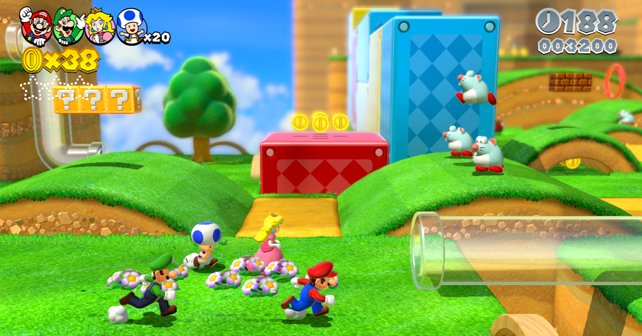 Although most eyes were on Sony and Microsoft’s new consoles at E3, Nintendo also had a point to make in reminding everyone why they should care about the Wii U.

Like Microsoft, Nintendo vowed to concentrate on the games and in that respect they met expectations. There was a familiar roll-call of Nintendo favourites, but a lack of any big surprises.

That said, it was refreshing to see a cavalcade of games brimming with such colour and vibrancy. It was a reminder of why we need Nintendo. Their games drip with charm and character, putting the likes of Project Spark to shame. The Wii U may not have the raw horsepower of the PS4 or Xbox One, but seeing these franchises in high-definition is an absolute pleasure.

There was much anticipation around the new ‘Mario action game’ and while Super Mario 3D World looked like huge fun, the slice on offer didn’t set the imagination running in the way that Super Mario Galaxy did seven years ago.

Mario Kart 8 offered its usual mix of chaotic racing and power-up antics, looking visually tight and featuring some interesting new gameplay twists such as anti-grav racing. It was a touch disappointing to find that Retro were working on another Donkey Kong Country title, but Tropical Freeze did look impressive and is certain to have a wider appeal than a new Metroid.

The 3rd Party show reel was embarrassingly light, especially with the much anticipated Deus Ex reissue now going multi-platform. However trailers for Bayonetta 2, X, and The Wonderful 101 all impressed. The Wii U library at this point evokes the feel of the 16-bit era dragged into the 21st century, and maybe that’s not a bad thing.

The presentation ended with a beautifully nervous moment as it appeared that a Wii U version of Animal Crossing was about to be announced, the Super Smash Bros trailer expertly judging our anxiety before exploding into a full reveal.

So, the games look great, but the 2014 release date for some key titles is a worry. Leaving the job to revitalise the Wii U to an HD Zelda remake and Super Mario 3D World sits just on the wrong side of comfortable.

Nintendo is stuck between two stools, they have a rabid fan base that will eat from the envious platter of Nintendo IP served to them, but they also need to appeal again to the audience that snapped up the original Wii in such numbers. So far we have assumed that Nintendo needs to emphasise the benefits of the Wii U Gamepad, but based on these games their tactic is to rely on familiar bankable names.

It’s easy to criticise them for this, but also easy to forget that their IP is often layered upon hugely creative and forward thinking game play. Anyone who has played Donkey Kong Country Returns or Super Mario 3D Land can attest to their invention, despite their familiarity. Let’s hope this continues.

The biggest problem for Nintendo remains one of 3rd party support and perception. If you look at the roster of games Nintendo will publish this year for 3DS and Wii U, it’s nothing short of jaw-dropping, but the breadth of library just isn’t there, and it remains a worry for Wii U’s long-term viability.