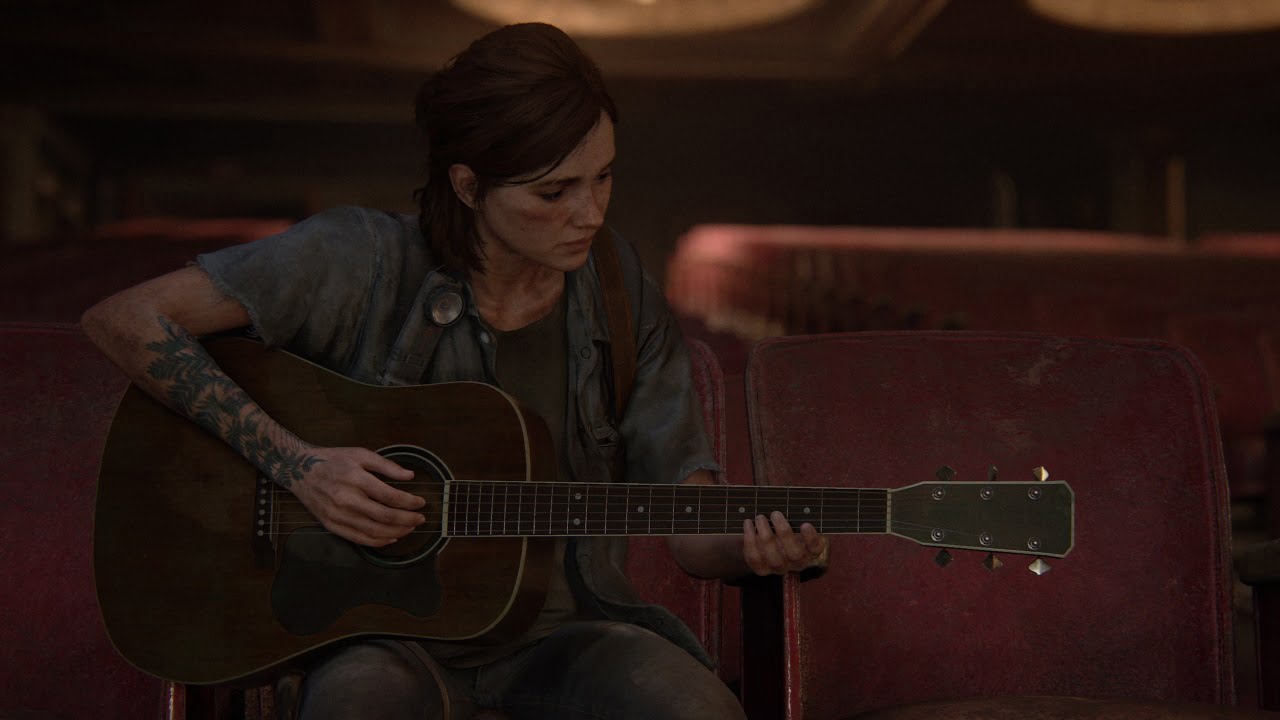 Here’s every real-life song – original, licensed recording or cast-recorded cover – featured on The Last of Us Part II soundtrack.

The Last of Us Part II must’ve been a licensing nightmare. There’s that official Taylor 314ce guitar, for one thing, before we even get to the tunes. And we’ve already seen how rights expiry can disappear games from sale, so when Naughty Dog told Sony’s licensing team they wanted Pearl Jam and a-ha (among others) on the soundtrack? That was probably not a popular decision.

But in addition to Gustavo Santaolalla’s original score, there are a whole bunch of licensed songs that made it onto the Last of Us Part II’s soundtrack. (We only wonder what didn’t make the cut, given some of the massive names that did. Let us know if you didn’t get any songs you pushed for, Neil.)

Some of the licensed songs on The Last of Us Part II soundtrack are the original versions, played as background or incidental music. Others are covers, played in part or in full by characters in the game. What’s really neat is that the voice actors behind Ellie and Joel, Ashley Johnson and Troy Baker respectively, played guitar and sang the vocals in the motion capture studio. There’s no sneaky session musicians or dubbing going on here.

So, here’s the full list of every licensed song and cover on The Last of Us Part II soundtrack.

Spoiler warning: This article will contain general location, character and story spoilers for The Last of Us Part II.

It’s super quiet and difficult to make out, but Ellie listens to this on a Walkman in a flashback scene right before Joel gifts her the guitar.

Bonus: This is also the song that Ellie sings while playing the guitar on the trailer for the game from the PlayStation Experience event in 2016.

Here’s an interesting one. You first hear Joel playing Future Days for Ellie as he gifts her that beautiful Taylor guitar, then throughout the game, you’ll hear snippets of it, played by Ellie. It includes the lyrics “if I ever were to lose you, I’d surely lose myself” which is thematically appropriate for The Last of Us Part II. So far, so sensible.

But did you know that Future Days appears on Pearl Jam’s Lightning Bolt album, which was released on October 11, 2013? That’s interesting because “outbreak day” – when the Cordyceps brain infection struck – happens on September 27, 2013. So in the fictional universe of The Last of Us, Pearl Jam never actually got to release Lightning Bolt.

So how does Joel know a song that was never released? Game director Neil Druckmann has the answer:

But how did Joel know @pearljam's Future Days if the song didn't drop until October 2013 — a month after Outbreak Day? Glad you asked! You see… it was performed live and posted on youtube months prior to the album's release. https://t.co/WEQmwPrE7L pic.twitter.com/g6Wa3GcMUh

I mean, sure, it sounds a little like a retcon, but it technically works.

Bonus: There’s a poster for Pearl Jam’s Lighting Bolt in the music store Ellie visits with Dina in Seattle.

In a game filled with violence (spoiler warning on that article) and the bleakest parts of the human character, there are a few small moments of light. They’re pretty few and far, and they decrease as the game goes on, but one of the nicest comes just after Ellie and Dina arrive in Seattle.

In the aforementioned guitar shop, Ellie finds an acoustic guitar that’s locked away inside a hard shell flight case. She pops open the case, tunes the guitar, and sings a song for Dina. That song? It’s a beautiful acoustic rendition of 80s pop anthem Take on Me, by Norwegian synth heroes a-ha.

For a game that’s split the discourse so heavily, it probably speaks volumes that this – a hands-off cut scene, of characters having a pleasant singalong – is my favourite bit of the game.

When Ellie is looking for Nora at the hospital, she happens upon a member of the WLF who is playing on her PS Vita. Ellie interrogates the girl at knifepoint and, ultimately, kills her when she fights back. But the game she’s playing? It’s hyper-violent shooter Hotline Miami. (A game that asks, “do you like hurting other people?” which can’t be a coincidence, given The Last of Us Part II’s themes.)

But the song that’s playing is the thing, here, and that tune is Hydrogen by M|O|O|N.

It Was a Good Day – Ice Cube (original recording)

This is a blink-and-you’ll-miss-it cameo from Ice Cube, but you can hear this classic tune playing in the WLF hospital as Ellie listens in on Nora being questioned by other WLF soldiers looking for Abby.

The brilliant Mark Lanegan – vocalist for Screaming Trees and latterly with Queens of the Stone Age – released his first solo album, The Winding Sheet, in 1990. The title track from that album appears on the soundtrack for The Last of Us Part II. You’ll hear it on the boombox at Owen’s aquarium.

This modern Christmas tune is playing during one of Abby’s flashbacks at the aquarium with Owen.

Another Christmas tune from the aquarium flashback at Christmas.

Ellie plays this one as part of one of the guitar minigames when she’s having trouble sleeping, at the farm with Dina and JJ.

This is the song that’s playing at the dance, during the flashback where Ellie and Dina kiss for the first time.

The song that starts to play after this is Ecstasy, also by Crooked Still, but it doesn’t really get going past the fingerpicking intro because the barn dance breaks down into a fight.

This is the song Ellie puts on with JJ when Dina requests some tunes to wash up to. Or, more specifically, this is the track on the B-side of the LP, where Ellie starts the needle. The album is Crooked Still’s Shaken By a Low Sound from 2006, and Ain’t No Grave is the seventh song on the record.

But what’s interesting is that a bunch of other Crooked Still tunes crop up in the game’s credits, but this appears to be the last time we hear them. So where are they, exactly? If you go and dance with Dina straight away, they’ll move to the backyard to hang out laundry and the music will end. But if you don’t interact with Dina immediately, you’ll also hear…

The eighth track on Crooked Still’s Shaken By a Low Sound.

Track number nine on Shaken By a Low Sound.

Track ten on Shaken By a Low Sound by Crooked Still.

The final track on Crooked Still’s Shaken By a Low Sound.

You’ll hear this one playing on a stereo as you battle the Rattlers in Santa Barbara.

This is a tricky one because it’s not in the game’s credits. Presumably, the snippet of fingerpicking is so short and with Joel not singing any of the lyrics, licensing wasn’t a concern. But in the game’s final flashback between Joel and Ellie, Helplessly Hoping is the song you hear him playing on his front porch when Ellie disturbs him.

The final song that Ellie plays – or, at least, attempts to play – in The Last of Us Part II is pretty unrecognisable. She lost two fingers on her left hand in the final fight with Abby and can no longer form those chords.

It’s a safe bet that it’s probably Future Days by Pearl Jam, given the chord progression Ellie’s trying to follow and the song’s significance to the story, but it’s hard to say for sure. (And that’s exactly the point, right?)

This is the song that plays for the final few minutes of the credits for The Last of Us Part II. But don’t give up that easy – there’s still a post-credits surprise (of sorts) after the end of the trailer.

This is the song that Ellie plays on the TV spot for The Last of Us Part II.

It’s also something that Naughty Dog got into trouble over, because it’s very clearly inspired by (if not directly copied from) Lotte Kestner’s 2011 arrangement of the New Order classic.

Forgotten what happened in the original The Last of Us? You’ll want to read our comprehensive story recap. Found this guide useful? Please consider supporting Thumbsticks or buying us a coffee to say thanks.