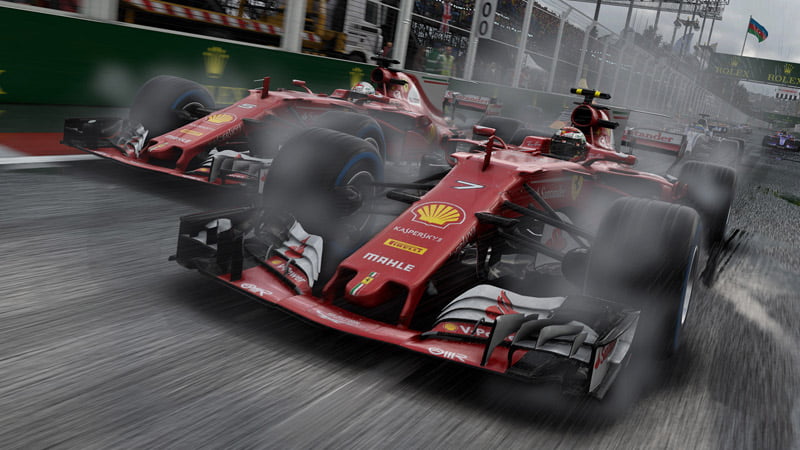 It’s go go go on gaming’s premier grand prix simulator, but can the latest iteration – F1 2017 – hold off the competition?

At the start of career mode in F1 2017, you choose the racing team you want to join. There are stories here: AMG Petronas, with its vast resources and dominant drivers looks to stay on top; Scuderia Ferrari, with its rich, storied history looks to take its ‘rightful’ place back in pole position; McLaren Honda has ambitions of colouring its faded glories with fresh paint, sober but ambitious. This is to say nothing of hungry upstarts like Haas and Sauber, looking to scorch their own marks on the tarmac.

It isn’t unlike the landscape of racing game development. Having established its craft and talent with Colin McRae Rally (now the Dirt series) and TOCA Race Driver, Codemasters secured the F1 licence in 2008. Long the celebrated domain of now-defunct Studio Liverpool, the oldest and second-largest development team in SCEE’s paddock (who left the licence, and the earth, behind as they screamed into the future with WipEout) it was a weighty name to take on.

Methodical steps are made, with each yearly iteration, to do the premium motorsport licence justice. With upstarts like Project Cars and Forza Motorsport offering their own formidable take on Formula one, Codemasters finds itself jostling for position and having to fight for its lead.

With F1 2015 – a reboot and the first to appear on PS4 and Xbox One – there remained a glint of the forgiving margins of the catch-all glory days of TOCA. Encouraged by the adulation afforded to the hardcore purism of Dirt Rally, F1 2016 was a more refined affair, and this year’s entry hews closer to that approach.

Swathed in downforce, you may be forgiven for feeling freer than you are to approach chicanes with a heavy foot. Your lesson comes early and harsh, as torque overwhelms your rear wheels, your palms jellied with juddering vibration as understeer looses you from the apex. This feels absolutely wonderful, failure proving an exhilarating, rewarding teacher. Each corner is sculpted with a shifting glissando of brake and throttle, a constantly improving art of precision and daring.

As you’re lead along gently through career mode – surely the best way to acclimate to a new F1 game – you become intimate with tiny margins and the discipline required to flourish in these narrow spaces. Speed must be tempered with glacial patience, each overtake a chess move anticipated sometimes laps in advance.

The driving feels intensely real and immensely exciting, the sense of speed eclipsing that of, say, Project Cars, while providing an experience at least equal in detail. And just like that game, F1 2017 offers you a rare, simple reward: the satisfaction of learning how to be better at something that’s difficult.

At least as far as the driving itself is concerned, yearly improvements live in small, meaningful margins. It is perhaps due to the much-vaunted competition of Project Cars, with its ‘Formula A’ class – which some considered a better representation of Formula 1 than F1 2015 – that Codemasters has wrapped a wealth of features around the core driving experience to stay in the lead.

There’s a precedent here, looking in particular at the heady days of TOCA, for a textured, exuberant love of motorsport. Project Cars, with its open structure and rudderless sense of play, allows you to jump into multiple disciplines as your heart desires. F1 2016, benefitting from a singular focus, puts you into a structured career mode that revels in the variety outside racing.

Practice plays a vital role not just in your growing skill, but in the progression of your driver and your team. Take to the practice course to net lap data for your paddock; test your fuel-conservation, your tyre management, and have your tech guys analyse your driving patterns to build a bespoke strategy for the upcoming race.

That these things are just as fun as the racing itself means that you don’t have any down time. In the same way that the strength of TOCA was your ability to dip into different disciplines, the strength of F1 2016 is that each facet of what you’re doing is just as engaging – it keeps you in a sweet-spot for longer.

Add to this the new Championship Mode, which allows you to race in events which deviate from official championship rules, and also allow you to take advantage of the new suite of classic cars. This is a boon to set F1 2017 apart, as miles of time stretch back behind you to some of the sport’s icons.

There is a palpable thrill to being able to drive the 1988 McLaren MP4/4, touched by the likes of Alain Prost and Ayrton Senna. This is accompanied by the 1995 Ferrari 412 T2, the 1992 Williams FW14B, the 2006 Renault R26, and eight other classics that highlight an appreciation for the history and legacy of the sport.

There is also a surprisingly entertaining story that engulfs your career, as is de rigueur at the moment; almost every sports game now has a story-heavy career mode. You’ll face rivalries with other drivers, tangle with management, and receive telling-offs and encouragement from everyone’s favourite agent, Emma Jenkins. Emma now has her very own office, and some oddly subdued scenes that take place as you lounge in the hospitality suite with your laptop on the desk.

These scenes betray the developer’s intimacy with steel and metal; when it comes to flesh and blood, it’s a different story, a different kind of Rigor. It’s funny and, at times, eerie when people are looking at you with dead eyes, gesturing with rubbery limbs like crash test dummies cursed with anima.

It’s best to try and keep your eyes on the laptop, which opens up a new skill-tree-like web of upgrades. These parse a wealth of information into easily readable categories – speed, tyre management, petrol efficiency, braking – while also going into far more granular details therein. It’s ideal for real petrolheads to get down to the nitty-gritty, whilst allowing those less familiar with the innards of these machines to defer to their team’s recommendations.

Unfortunately, there are some ugly loading times to go with these. In-between races you can expect long waits between laptop tinkering, practice, runs, and before races. It isn’t outrageous; it’ll just test your sure-to-be-developing sense of patience.

It’s odd, when you consider what’s loading isn’t cutting edge in terms of graphical polish. Lacking the onanistic detail of Forza and Project Cars, F1 2017 doesn’t mesmerise graphically. What’s here is pretty enough – and at a steady 60fps – which is impressive considering the blistering speeds you reach, through some well-detailed tracks and mercurial dynamic weather.

These little slights provide minor drag on a fantastic racing game. The initial bite of the learning curve may frustrate newcomers, but it’s rewarding and gratifying to persevere with. Delivering some much-needed variety to what was – only two years ago – a scant selection of modes and options, Codemasters has tweaked and refined a Formula one driving experience that is, as of writing, unrivalled. Project Cars 2 lurks just round the corner, but it would require an awful lot to overtake this.