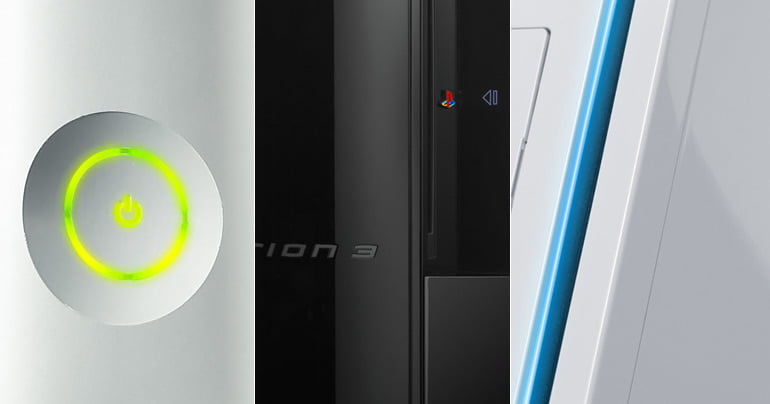 The Red Ring of Death has given way to the Blue Light of Death and next-gen has officially become current gen.

The last 8 years have been so defining and transformative that the wave new of consoles feel more like an evolution than a revolution. It will be fascinating to see how the landscape changes in the coming decade, but before we embark on that journey here’s a look back at the legacy of “generation 6”.

The most obvious inclusion on this list. Online multiplayer has been around for a long time of course. But in the last console generation (and hats off to the Xbox 360 for pretty much getting it right on launch) online multiplayer became standard, and for many games it was the core component.

Friends lists and profiles allowed us to connect, communicate and insult each other. Achievements and trophies let us brag. Co-op become a thing. Sony created Home and we all hung out there, for 10-15 minutes. And even Nintendo dabbled in it when it could be bothered.

Over time, the boundaries between single and multiplayer have become blurred and as the generation changes there are more and more games that bring the two together, such as Need for Speed: Rivals and Destiny. The future will very much be a connected one.

In the early days of the last generation, Sony and Microsoft waged a war over the format of HD media. In one corner was Sony and Blu-Ray, in the other, Microsoft and HD DVD. In fact it was less of a war and more a case of hand bags at dawn as, in truth, the future of video content consumption pretty much lay in digital distribution. Yeah Blu-Ray was nice, but it was the rise of streaming services such as Netflix, Hulu and BBC iPlayer and Amazon/Lovefilm that changed how consoles were used. And again even the much maligned Wii played its part, becoming a hugely popular device for streaming.

The PS3 and Xbox 360’s support for DLNA was also a tick in the box for consoles to become the heart of the home’s entertainment centre. (The one black mark against the Ps4’s feature set is the removal of that support.) No longer was the box under the TV just for video games, it had another purpose, perhaps one with a far wider appeal.

DLC and the rise of arcade

It started, famously, with horse armour, took a scenic diversion with Project $10 and ended with season passes and paid content unlocks. The days when a released game was a completed game are over. Games are now something that canto be added to, subtracted from , tweaked and pay walled. But on the plus side games can also have bugs eradicated, new levels added and be supported with new content long after release.

Online delivery also paved the way for smaller arcade titles and a resurgence in retro and artistic design aesthetics. With the likes of Journey, Braid, Fez, Limbo , World of Goo and (personal fave) Snoopy: Flying Ace we were treated to a world of small but perfectly formed games that happily gave their AAA brethren a run for their money.

However, a glimpse of the problems we might face with online games was also evident. One of my personal highlights was the XBLA game show 1 to 100. An incredibly fun ‘live’ game that, now retired, I can no longer experience. It highlights the need to find a way of preserving games that are based on connectivity for future generations.

We waggled, we waved, we strummed and tapped and danced. Like it or loath it, motion control had a massive impact. Although Nintendo were not the first, their determined push with the Wii opened up the market to such an extent that Sony and Microsoft had little option but to follow. Motion control is now largely shunned by the hard-core gaming community, but in Oculus Rift and Kinect 2 the push for immersion continues and is likely to do so until we get to the holo-deck in our homes.

That said, at least we got rid of the wires.