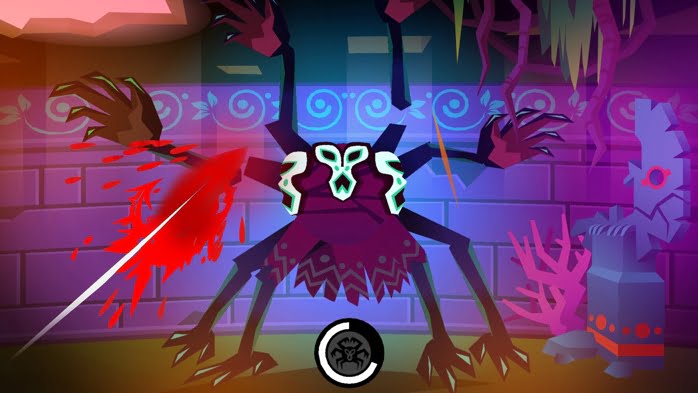 DrinkBox Studios were founded in 2008 and earned a name for themselves with their two Tales From Space games; About a Blob and Mutant Blobs Attack.  However, it was 2011’s Guacamelee! that brought the studio wide-spread recognition and acclaim.

That game’s twist on the Metroidvania formula was welcome in how it refreshed a tired genre and used humour and artistic flair to distinguish it from some of the more consciously retro indie games released around the same time.

After the success of Guacamelee! it would have been obvious, perhaps, to expect the DrinkBox team to jump straight into developing a sequel. The Toronto-based studio decided to take a different path and are instead readying Severed, a first-person, touch-controlled swipe ‘em up, featuring a one-armed hero.

DrinkBox are also reaffirming their commitment to the PS Vita – for launch at least – the platform that served them so well when Guacamelee! was released.

At GDC’s Day of the Devs event we went fingers-on with the game to see how it’s progressing.

The first thing that jumps out is how beautiful the game is. With the sun setting on the PlayStation Vita, Severed – with its crisp, colourful art direction –  serves as a reminder that the original OLED PS Vita screen has few peers to this day.  The game looks startlingly gorgeous and every moment is a delight to take in.

Severed uses a first-person view point but, interestingly, the environments are constructed entirely from 2D art. DrinkBox’s concept artist, Augusto Quijano, explained how the application of two-dimensional assets to a three-dimensional space was achieved.

“We wanted to do 2D art so we basically mapped it to cylinders,” Quijano said. “Think of it like a Google maps panoramic. It’s simple but it just works.”

And Quijano is right.  The overall effect is akin to walking through a maze made from the pages of a pop-up book.  To help orientate the player the game is broken into distinct rooms of the same size. The unapologetically modular layout keeps navigation and movement simple but allows for light exploration, with certain areas gated behind keys or enemies.

Severed’s aesthetics also allow for some gruesome moments to be rendered with cartoonish charm, be it the gloopy interior corridors of a giant worm or the squishy dismemberment of a spider-like foe.

Combat is deliciously tangible with each opponent having their own tells and weak spots. They are easy enough to master one-on-one but increasingly tricky to defeat once you start engaging multiple monsters. Mastering and juggling the the various combat techniques is a challenge, although the game’s excellent sound design provides useful feedback on how your attacks and blocks are connecting.

At first glance the design of the map and perceived simplicity of the game’s combat imply a basic experience, but as the game kicks into gear Severed’s combination of exploration, combat and looting rapidly overcomes any preconceptions. If Guacamelee! was DrinkBox’s tribute to Metroid and Castlevania, then Severed takes its lead from the pattern-based combat of Punch Out! and the light dungeoneering elements of a Legend of Zelda game. It’s a clever mix that feels perfectly at home on the PS Vita hardware.

There’s also a story underpinning the action that charts the journey of one-armed protagonist, Sasha. It’s charming and delicate stuff but not force-fed to the player, as Quijano explains.

“The story is not in your face but runs in the background,” he says. “It’s a dungeon crawler at heart and the balance lets the gameplay shine but – at the same time – we’re really proud of the story. It’s there to provide a mystery and Sasha is an interesting character to explore.”

With Severed nearing release there is a lot to be excited about. Although the game’s choice of launch hardware may limit its audience, it looks like being a worthy successor to Guacamelee! and is potentially one of the PS Vita’s twilight stars.

Severed will be released on PS Vita later this year.