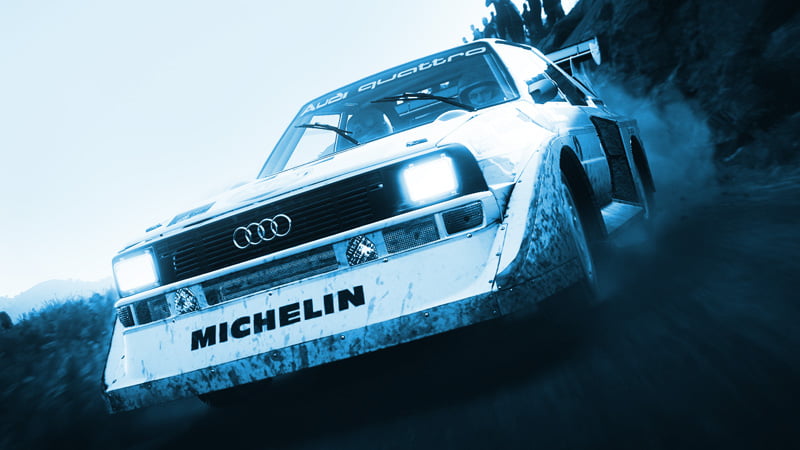 Codemasters are taking Dirt Rally back to basics in the upcoming Dirt Rally 2.0. We got behind the wheel of the game, and heard from chief game designer, Ross Gowing.

Dirt Rally 2.0 is a simulation through and through. That much is immediately apparent as I heave my VW Golf Mk 2 away from the starting line in the demo build of Codemasters’ new racing game.

Shorn of its predecessor’s arcade-trappings, Dirt Rally 2.0 requires constant attention, with each corner providing the opportunity plough into a tree and lose precious time. Fortunately, each corner also provides an opportunity to master a turn and ease into a straight with panache and elegance. In these moments – before then next corner hurtles into view – you are allowed a brief rush of pride and satisfaction. It’s this ebb and flow of anticipation, panic, and exhilaration, that makes Dirt Rally 2.0 a joy to play, even for a self-confessed rally newb like me.

At a preview event for Dirt Rally 2.0, Ross Gowing – who has taken over as chief game designer for the series – explained why the game is returning to basics.

“Now was the right time,” he says. “Dirt Rally 2.0 has been in development since the end of Dirt 4. We’ve been prototyping things up, working on new ideas, and this was exactly the right time to bring that simulation feel back and focus on that.”

No longer skewered by trying to balance arcade thrills and realism, Dirt Rally 2.0 includes a single handling model that informs the game’s entire design, from the road surface up.

“The handling is the most important thing,” Gowing explains. “We have the same largely the same handling and physics teams, who have taken a nuts-and-bolts approach to everything. We make sure everything is working how we want it to, and that everything is updated based on manufacturing data that we have. We have really worked on the tyre compounds, and how they interact with all the movements on different surfaces. We’re actually giving tyre compound choice to the players for the first time, so there’s a tactical consideration to make.”

I’d go as far to say that the focus to simulation may actually be of help in terms of accessibility. The learning curve may be steep but this provides constant feedback, and once one skill or technique clicks it’s a natural progression up through the gear into more advanced driving techniques.

The handling model is also developed in conjunction with the studio’s work with three rally drivers; Ryan Champion, Oliver Solberg, and WRC competitor, Jon Armstrong. The development team use their stage times to help set the AI’s difficulty levels.

“We evaluate them against each other to determine the percentage difference on any given route or car class. We then work back from that to figure out fastest AI times, and benchmark more average players,” Gowing says.

Players are assisted by the voice of 2003 World Rally Championship winner, Phil Mills, who provides the in-game pace notes. To make these as accurate as possible Mills manufactures the notes through recce videos. He then works with Armstrong and the drivers’ team to make any adjustments, and create an authentic vocal delivery. After a few attempts on the demo course, I can vouch for Mill’s reassuringly calm delivery, and the accuracy and timing of his instructions.

The game’s varied range of locations are also receiving care and attention, with surface degradation and atmospheric conditions all having an impact on how the game plays. Dirt Rally 2.0 will initially launch with six rally locations and eight World RX Championship locations, with more to come.

“Argentina is the really big one to get excited about. It’s so challenging, and incredible to watch a professional drive round it,” says Gowing. “In terms of Rally Cross Tracks, we are going to come out of the gate with eight official tracks, and then after that, we will hopefully add some more from the calendar.”

Although the demo only featured a limited selection of cars – such as the VW Golf in which I proudly set a 10:42 time – the full game will feature 50 different vehicles. More cars and stages will be also be added to the game through post-release DLC.

“Car-wise, it’s great to partner with World Rally Cross again and have access to all the teams and drivers there representing this season of the game,” he says. “We have plans for the first six months after launch. We know what want to release after that, and then if players engage with that and tell us they want more, we will do even more after that.”

Dirt Rally 2.0 will be released on Xbox One, PlayStation 4, and PC on February 26 2019. The Dirt Rally 2.0 Deluxe Edition will give players access the first two seasons of post-launch content, including three new locations, and five early vehicle unlocks.