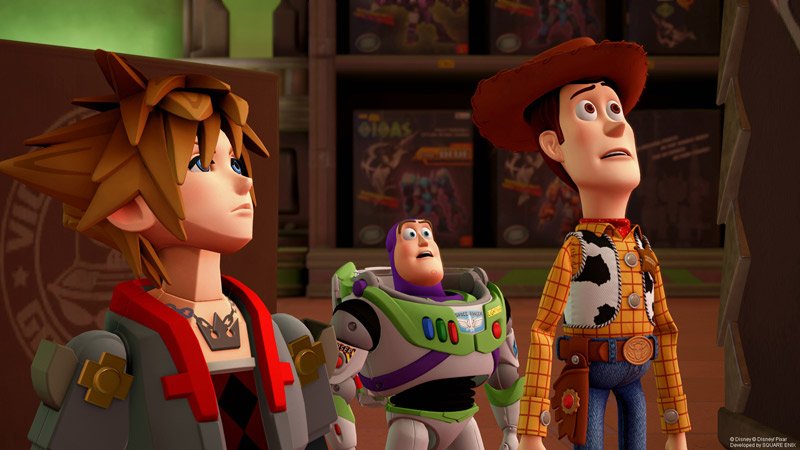 We played Kingdom Hearts III at E3 2018, and have thoughts on how it’s shaping up, now that the release date is finalised.

While we waited for the demo station to open up for our Kingdom Hearts III appointment, we make idle chit-chat with the Square Enix chap manning the battlements, keeping the hordes at bay with nothing more than a clipboard and a polite word.

“Are you guys excited for this?” He asks, beaming about the game he gets to work on, a game he tells us he’s been playing a lot in the office and clearly loves.

But we’re the press. We’re not supposed to be excited. We’re supposed to report with an objective eye. We nimbly evade the question.

“To be honest, we half-believed it wasn’t ever going to be released. This is the first time we’ve genuinely been confident it’s coming out in–” We pause. Not for effect, but because we genuinely can’t remember. “How long has it been since the game was first shown now?”

An Xbox One X demo unit opens up, and the chap from the Official UK PlayStation magazine we’ve been chatting with while we wait lets us take it, for obvious reasons.

It’s instantly quite disconcerting to be playing a Kingdom Hearts game on an Xbox controller. That feeling, of being all at sea, of trying to remember which flavour of ‘X’ button we’re dealing with to follow the on-screen control prompts? It feels worse, somehow. We’re acutely aware that Kingdom Hearts III doesn’t belong on this controller, but it quickly passes.

There were two demo levels on offer: ancient Greece, from Disney’s 1997 Hercules movie, a realm we’ve seen in Kingdom Hearts in the past; and Andy’s bedroom from Toy Story. We naturally plump for the new option, one of the additions to Kingdom Hearts III which – along with the Monsters Inc. and, from this week’s latest trailer, Ratatouille – the fans are most excited for and eager to play.

We skip the exposition because time is limited, and besides, unless you’ve built yourself one of those crazy red string detective walls and have been revising your Kingdom Hearts history for 2.8 (HD Final Chapter Prologue) hours a night, nobody has any idea what’s going on. The heartless are bad, they invade Disney realms, then Sora, Goofy and Donald show up – in this case, looking a bit Lego-ish – to both defend the denizens of Disney’s world, and conscript them into the battle against evil. Mickey Mouse is some sort of war hero general. The voice acting is decent enough, but we’re almost entirely sure it’s not Tom Hanks and company that have been in the recording booth for this one.

And now depending on your inclination, this may come as very good, or very disappointing news: Literally nothing has changed for Kingdom Hearts III, at least, in the demo slice we played.

Yes, the graphics are beautiful and it’s the prettiest the game has ever looked – especially the grass and other environmental elements of Andy’s street – but it’s still the same mix of clashing colours and bouncy animation we’re used to. There are also some tweaks and refinements to the UI and combat, but generally speaking, it plays exactly the same as any other Kingdom Hearts game, too. Later, we move to a toy store and get into a mech-to-mech battle, which is a slight change of pace, but vehicular sections in Kingdom Hearts III are nothing new, either.

We beat to death some pink mechs – who look a bit like D.Va from Overwatch – and the demo abruptly ends. There’s an opportunity to take a photo with a life-size keyblade prop, but we’re probably a little too old for that. Everyone else seems to be loving it.

There’s absolutely an argument that if it isn’t broken, you shouldn’t try and fix it, and you can’t blame Square Enix for incrementally refining rather than reworking or re-imagining Kingdom Hearts III. It’s also fair to say that there may be more surprised to come, later on in the game, but the demo we played was the very definition of familiarity.

There is a feeling we’re trying to suppress, that this is just another iterative improvement, like squeezing a few more miles per gallon out of an engine, or say, adding the latest player rosters to FIFA or Madden. We appreciate that there are far more moving parts to Kingdom Hearts III than something like FIFA or Call of Duty, and working with all of the Disney teams to get the licensing and likenesses and writing and storylines just right must be a headache.

But at the end of the day, a little part of us can’t help but wonder: what took them so long?