With Red Dead Redemption 2 available on PC, PlayStation 4 and Xbox One – and playable on PS5 and Xbox Series X|S – you might be enticed by the prospect of playing or revisiting Rockstar’s first Wild West opus.

The original Red Dead Redemption holds up remarkably well in both design and execution. Its depiction of the Western United States and Mexico remains one of the most fully formed and coherent game worlds ever created. It’s perhaps only surpassed by Grand Theft Auto V‘s Los Santos and The Legend of Zelda: Breath of Wild‘s Hyrule.

But where and how can you play Red Dead Redemption in 2022? Here are your options.

How to play Red Dead Redemption 1

The obvious place to start is the disc version of the original release. The Game of the Year edition also includes the Red Dead Redemption Undead Nightmare DLC and various other add-ons. You can still pick up both versions easily via eBay or Amazon.

The game can also be downloaded from the Xbox and PlayStation 3 stores. The Xbox 360 version has a slight performance advantage, with a better framerate and a higher screen resolution.

It’s not possible to play the PlayStation 3 disc version of the game on a PS4 or PS5, but there is a solution of sorts. Red Dead Redemption is available via Sony’s PlayStation Now streaming platform. Although the service is reliable, it’s worth noting that your internet connection speed will impact the quality of your experience. Sony recommends a 5Mbps or greater internet connection when using PlayStation Now. To be honest, we’d probably recommend finding another way to play such an amazing game. 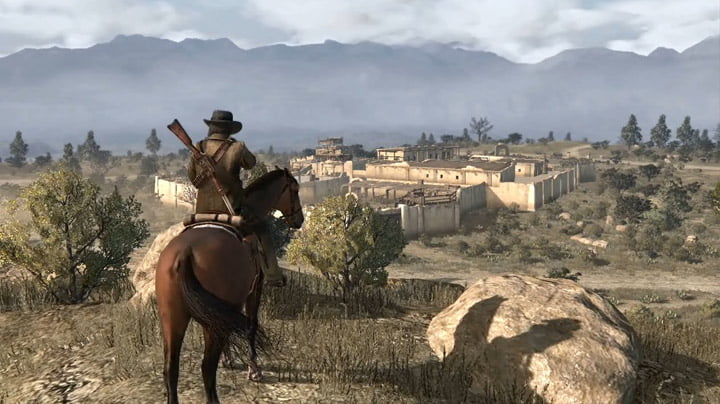 Xbox One and Xbox Series X|S

Hopes for a ground-up remaster of Red Dead Redemption were dashed when the game was added to the Xbox backwards compatibility list in 2016. If you buy the game from the Xbox One or Xbox Series X|S store – or the Xbox website – you’re good to go.

If you have a disc copy of the Xbox 360 game, you can also pop it into your Xbox One or Xbox Series X. This will download the game code from the Xbox store. You’ll need to keep the disc in the tray while playing and have approximately 7.5GB of hard drive space free for the download files.

Playing Red Dead Redemption on a standard Xbox One or Xbox Series S also brings a few performance enhancements, such as an improved frame rate and the elimination of screen tearing.

However, the best way to play the game – assuming you have a 4K display – is on an Xbox One X or Xbox Series X. The game receives a crisp native 4K boost, with the knock-on effect of improved lighting and various environmental effects.

If you are an Xbox Live subscriber, your Xbox 360 game saves will automatically synchronise if you play the game on a new console.

If you want to play Red Dead Redemption natively on PC, you’re out of luck. No one really knows why the game was never ported, but reports suggest that Rockstar were just unable to get it running effectively. Grand Theft Auto V‘s continued success on Steam indicates that a PC port would be popular, so we just have to assume that it’s a technical limitation rather than a lack of desire.

However, if you are so inclined, you can play the game on PC via PlayStation Now.

You can also stream the game from an Xbox console to a PC running Windows 10 or 11 using the Xbox app’s Remote Play feature. This also works for compatible iOS and Android devices.

It would be nice to play Red Dead Redemption on Nintendo Switch, wouldn’t it? It’s a port that we’d love to see and one that seems well within the console’s capabilities. However, it doesn’t seem likely.

Visit our new releases page for the latest Switch, PlayStation, and Xbox games. And follow Thumbsticks on Twitter and Flipboard for daily gaming news updates.