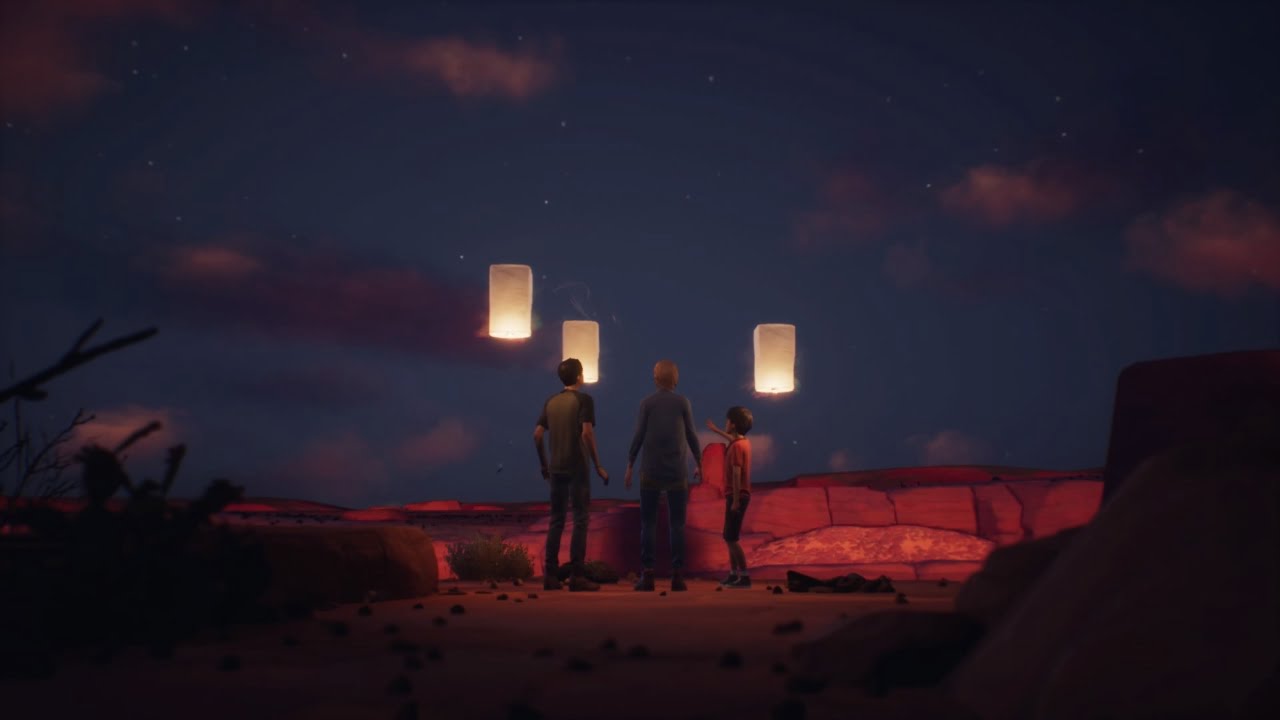 Life is Strange 2’s fifth and final episode, Wolves, is in many ways a fitting encapsulation of all the series’ strongest and weakest elements so far.

While it’s, at times, an anti-climactic and somewhat rushed conclusion to the series, it’s also a poignant and emotionally rich finale that shows the weight of your choices and refrains from shying away from the more morally complex aspects of your adventure thus far. It may not be an epic final sprint that introduces some drive to a series that has often lacked it, but it is a bold and surprisingly melancholic ending that – much like the rest of the sequel – takes some big risks and ultimately succeeds because of it.

Despite the final episode ending with Sean and Daniel Diaz making their way to the Mexican border, Wolves’ first big surprise is that it takes a lengthy detour from this cliffhanger. Picking up a few weeks after the finale in a tiny desert town known as ‘Away’, around half the episode concerns the brothers planning their route across the border and bonding with their estranged mother. It’s a slow start for sure – especially after the chaotic ending of the fourth episode – but within this 90-minute segment is a lot of superb character moments for Sean, Daniel, and their mother, Karen. While most episodes this season concern the family fighting about repetitive topics, it’s refreshing to see them enjoying each other’s company and establishing the newly found bond they all share.

It’s here that Dontnod also provides this episode’s largest location to explore and scour for collectables, with the town of Away full to the brim with characters to converse with, objects to interact with, and even a treasure hunt to complete. It seems every episode I praise Dontnod’s attention to detail with these explorable locations, but it’s worth reiterating that it’s without a doubt their strongest asset. Whether it’s small decisions like leaving a loving, cold, or scathing note to your mother in her trailer, or finding small items that expand character backstories, exploring in Life Is Strange is always a rewarding experience. There’s even a returning character from the first season that makes a short appearance, and some some fun easter eggs that hint towards the fate of the main cast.

However, it can’t help but feel like a strange diversion for an episode that so desperately needs to focus on giving this story purpose. Every episode thus far this season has struggled with feeling largely aimless, and an hour and a half pitstop to explore a town and meet brand new characters can’t help but feel slow-paced and uneventful. This comes off as a moment that should occur at the midpoint in the story, not in an epilogue which looks to wrap up the main characters’ story arcs.

As a result, what remains can’t help but feel rushed. When the brothers do eventually start making their way to the border, it appears some massive questions that deserve to be explored are passed over. Daniel asks Sean whether they will be able to live a real life in Mexico; whether running is really the best answer and how they will be able to make a living on their own. But, because the game leaves these questions until the last minute, you never get time to ponder the answers.

Even when the finale does eventually pick up speed it lacks appropriate pacing, with several major plot beats happening suddenly without feeling earned or properly set up. What is there is supremely interesting and morally grey in the best way possible, but you can’t help but feel something is missing; a piece of the puzzle out of place. In truth, it’s not the ideas that Wolves raises but the speed of which it resolves them, which is a shame when considering just how much time is spent treading water in Away for the first half of the episode.

Luckily, it leads to a moral decision that is much more difficult than the binary ‘good or evil’ choice that capped off season one’s conclusion, asking for you to make a crushingly hard call in a split second. While the road to the ending is rocky, it’s this moment that cements Life Is Strange 2 as a worthy successor and a beautifully heart-breaking story, with the outcome of your decisions leading to a number of different endings. The best part? There are no “bad” or “good” epilogues. Every single one (of which there are 7) leads to a surprisingly melancholy and bittersweet conclusion that takes your prior choices into account and shows the realistic result of your adventure.

It is without a doubt proof of how much Dontnod’s storytelling has matured and garnered nuance since Life Is Strange’s debut episode, presenting a finale that few would’ve expected after playing the first episode. Granted, while Life Is Strange 2 has definitely not been a flawless effort, it is a game that has a lot to say and one that ultimately finds an emotionally impactful way to say it. If this does happen to be the last episode in the franchise for a while – which might be the case, with Dontnod moving onto Xbox exclusive Tell Me Why – then this is a fitting end, showing the hard-hitting, emotionally poignant brilliance that made Life Is Strange such a cult-hit in the first place.

Life Is Strange 2: Wolves is by no means a perfect finale, but it’s a heartfelt and emotionally charged conclusion that refuses to shy away from the morally complex nature of the story so far. After the credits roll, you’ll be hard-pressed to find anyone that doesn’t agree that the end of the Diaz Brothers’ story is impactful, unpredictable and, ultimately, deeply touching.