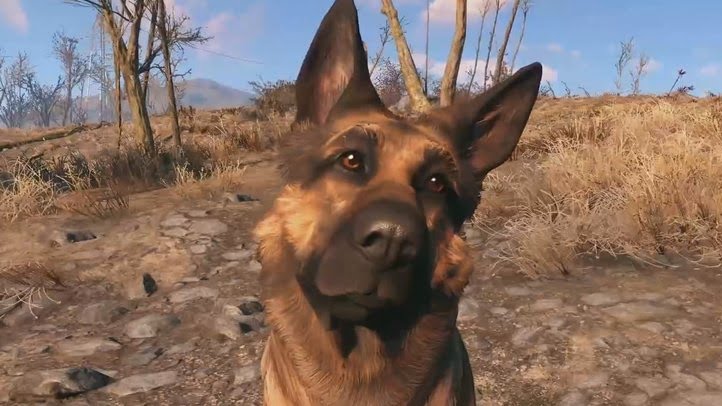 Have you lost Dogmeat, or have other companions gone AWOL in Fallout 4? Here’s some quick pointers on finding them.

Fallout 4 only allows you one companion at a time, except in a few special cases – more on that later – so when swapping travelling buddies, you’re going to find yourself regularly sending someone away.

Usually, when you’re swapping one companion for another, you get the option of where to send them to for safe keeping. A list of all your available settlements will pop up, and the dismissed companion with dutifully trudge off to the iconic Red Rocket gas station or the burgeoning community of Sanctuary Hills… or whichever other wasteland hovel you felt inclined to subject them to, if they weren’t one of your favourites.

If you’ve lost Dogmeat (or someone else) and can’t find them at the place you think you sent them to, is it possible you made an error? Perhaps clicked on one of the adjacent settlements in the list by mistake? If you check your other settlements and that’s still no good, then you might find them back at the first place you met them; hopefully they’re memorable enough that you know where that is.

One companion is harder to find than others, though. He’s small and fast, doesn’t get involved in working on your settlements (Paladin Danse tending crops in his Power Armour is hilarious) and doesn’t chatter away inanely to himself when you get within fifty yards, so he’s altogether more difficult to pin down; this is what to do when you’ve lost Dogmeat in Fallout 4.

Unfortunately, everybody’s going to have lost Dogmeat at some point in a Fallout 4 play-through (unless of course you’re a heartless monster and didn’t take him with you as a companion when you first met). There’s a certain point in the main story where he’s going to go missing; it’s inevitable, and it stems from the brief sections where you can operate with more than one companion.

At various points in the game, you can exceed the one companion limit in Fallout 4 for short periods of time when someone is enlisted as a temporary companion, or you are in fact following them for a change. Teaming up with Super Mutant Strong for a daring escape before he offers his services as a companion is one such example, or taking the toe-dipping Brotherhood quest with Paladin Danse before being offered to join the ranks; you can take these quests with whoever you originally had in tow and this extra companion for added team firepower.

When searching for a missing person with Private Detective Nick Valentine, you’ll be on the cold trail of a kidnapper when Nick makes an excellent suggestion: let’s use Dogmeat as an actual dog, and see if he can track the scent. It’s a brilliant moment in the game and a wonderful change of pace from fetch-quests, as your faithful hound bounds across the wasteland and you have to try and keep up; every now and then he’ll lose the scent and you have to find him more clues, before he tears off into the distance again.

When you get to your destination, Nick remarks that Dogmeat looks a little tired, and he dismisses him for you – yes, that’s right, one of your companions dismisses one of your other companions – and that unfortunately circumnavigates your ability to tell the dismissed companion where they should return to.

Dogmeat trotted off into the distance and I couldn’t catch up with him before I lost him into the wasteland. I got attacked while forlornly running after him and he, faithful stalwart, came back to fight at my side, but before I could interact with him after the fight was over, he was gone again. I found myself calling his name at the screen like I was trying to take him for walkies. I looked like a crazy person. Why didn’t Bethesda give us a damn whistle?

I had lost Dogmeat, but I was also in the middle of a quest with Nick, so I dealt with the matter at hand and figured my hound would turn up at my home in Sanctuary Hills. I was wrong.

Lost Dogmeat – Where to go first

When you’ve lost Dogmeat and he’s not been given an instruction of where to go, he’s going to default to that standard NPC behaviour of “I will go back to the place we first met, and hope they come and look for me here”. It’s an odd departure from previous Fallout games, where your dog would either turn up at the entrance to the Vault or your in-game home, but because Fallout 4 has more options of homes than ever before, they’d not know where to begin.

So in order to find a lost Dogmeat, don’t head to nominal home Sanctuary Hills or the entrance to Vault 111 – you’re going to need to go to where you first met him – head instead to the Red Rocket gas station, south-east of Sanctuary Hills, on the road between there and Concord.

When you get there, wander around. He has quite a big patrol radius, which you’ve no doubt encountered when travelling with him, so it may take you a little time to find him. If there’s a doghouse – more on that later – on site at the Red Rocket gas station, then your canine companion may be taking a little rest in there, but there’s not likely to be one of those unless you built one.

Keep in mind that companions don’t fast-travel, and it can sometimes take them a long time to walk from one place to another, particularly if they get waylaid by enemies en route. You may want to travel away and come back again, or maybe sleep or rest on some furniture, but keep your eyes peeled and he will show up on the forecourt eventually.

Congratulations! You’ve found your lost Dogmeat… but what happens when you (inevitably) lose him again?

Lost Dogmeat – Every other time

Unfortunately it’s not just easy to lose Dogmeat when other companions send him away without proper instruction. Even if you know with one hundred percent certainty that you sent him to one of your settlements, he can still be a needle in a haystack to find. He’s small, he’s fast, he’s quiet, and he’s also rather brown, which doesn’t help distinguish him from the nuclear wasteland.

He also likes to rest in doghouses or kennels and Sanctuary Hills has an abundance of the damn things, which means you’re going to need to check them all repeatedly until you locate him. Unfortunately a lost Dogmeat doesn’t stay put in a kennel when he’s in it either; he’ll still get up, wander around the settlement, and generally be a dog, so you’re going to have to check kennels repeatedly until you find him.

We therefore recommend for this reason you scrap all the kennels in Sanctuary Hills except one, and put that remaining kennel somewhere you can always find it: mine is right next to my Power Armour station, and it’s rather satisfying to have Dogmeat sat with you while you’re crafting in your workshop.

There’s one that’s a bit harder to find, though. As you enter Sanctuary Hills from the bridge, check the back garden of the first house you encounter on the left-hand side of the road. The doghouse is in the very back-left corner of the garden, set in a small hollow near the fence, and if you’re certain you’ve checked or cleared all the other kennels, then that’s where you’re going to find your lost Dogmeat.

Lost Dogmeat – What about other companions?

Follow the same rules for finding other companions as you would a lost Dogmeat:

But if all of that fails, there’s a nice straightforward way to turn up a stray companions – including a lost Dogmeat – if you’re really stumped: build a bell.

Yes, that pointless-seeming mustering bell in the misc menu of settlement crafting? Place one of those in the centre of your settlement, right near your fast travel point and your crafting benches, and give it a solid ding: everyone in the settlement will come running, all of your companions, and also all the other dregs who dwell in your settlement… who might be a little annoyed that you’ve summoned them for no reason, given that the bell is supposed to be for rallying everyone together in case of attack.

Doesn’t matter though. They can be annoyed at me all they want, so long as I can be re-united with my lost Dogmeat. If only they’d given us a bloody whistle to call him with, life would be so much easier.

Looking for more hints and tips for Fallout 4?