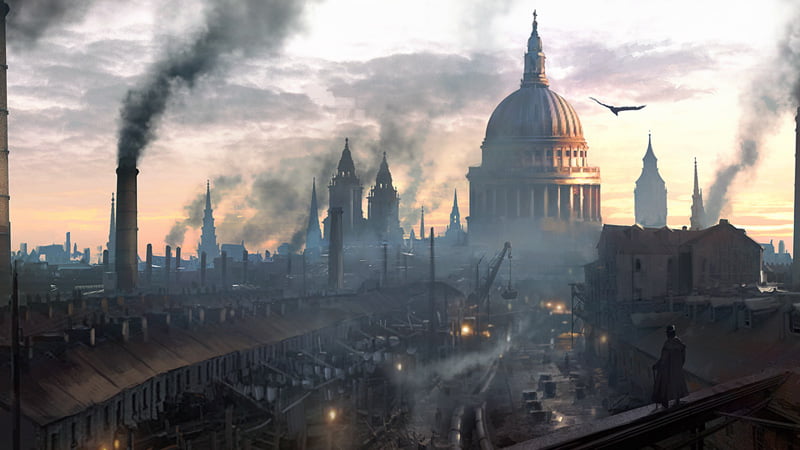 How Assassin’s Creed Syndicate made me look at London with new eyes.

To celebrate the release this Friday of Assassin’s Creed: Origins we are going to explore the series and its weird and wonderful world. Whether it be foible, folly, or flourish, we will look at the worlds, the ideas, and the studios, to revel in a decade-long franchise that’s shifted the gaming landscape. For more AC Week articles, go here.

For all the criticism that the Assassin’s Creed franchise receives, I’m a sucker for its genre-defining formula.

By taking a year off, however, Ubisoft has effectively admitted that the formula was in need of a refresh. It was a decision likely made during the development of Assassin’s Creed Unity, a flawed and famously bug-ridden game that overreached, and fell far short of the series’ best instalments.

Unity’s follow-up – the Victorian London set Assassin’s Creed Syndicate – was a fine return to form, however, something that I feel has been forgotten in the rush to embrace the RPG pivot of Assassin’s Creed: Origins.

Unlike its predecessor, Syndicate‘s story has verve and humour, and gallops along with a cast of clichéd but fun characters led by the sumptuous pairing of Jacob and Evie Frye. They are the best Assassin’s Creed protagonists since Ezio Auditore, balancing grit and determination with charm and a faux-cockney swagger.

In terms of gameplay, there’s also much to embrace, be it the Batman-esque zip-line, or the addition of carriages to traverse the city. Assassin’s Creed Syndicate still suffers from the surfeit of busy work that plagued its predecessors, but it’s a more streamlined game that serves up its pleasures in a more digestible manner.

However, for me, the real star of the show is the game’s representation of London.

I have long since categorised myself as a video game tourist. I enjoy games that offer me the chance to explore strange and wonderful locations, be it Red Dead Redemption’s frontier, Skyrim’s Skyrim or even Unity’s evocative – if chuggy – Paris. One reason I give so many Assassin’s Creed games the benefit of the doubt is my enjoyment of the worlds they create.

Syndicate sees Ubisoft’s turn its attention to a location familiar to me; the city I live and grew up in. A city that, although under constant development, retains much of its heritage and topography. It’s a city where every new comedy skyscraper remains bordered by pokey alleyways, and crooked streets that tell fascinating tales from the past.

Syndicate’s representation of London has come under much scrutiny, with historians offering up assessments of its accuracy. Looking at the game’s map it’s evident that Ubisoft compressed the city’s geography, and blessed it with a curiously redundant circular rail route. All of these changes were made in the name of improving game play, and quite right too. The city’s narrow streets are widened to allow for carriage travel, and police uniforms are tinted a brighter than usual shade of blue to aide in identification.

The various boroughs feel distinct, with the likes of Southwark, Lambeth and Westminster all having their own atmosphere. And the constant churn and throb of river traffic on the Thames is an atmospheric triumph. London’s main artery deservedly becomes a location as important as any other in the game.

It may not be a strictly accurate representation, but most importantly the game succeeds in feeling like London. (Although its weather system is wildly optimistic.)

However, rather than enjoying the novelty of seeing London digitally recreated, I was struck by how it made me look at the real, present day London in a new way.

The Bank of England

As someone who works in the heart of the city I walk past a number of monuments and landmarks every day. Dulled by repetition and familiarity, I suffer the commuter’s curse of looking at my feet as I get from A-to-B as quickly as I can. Assassin’s Creed Syndicate made me look up again.

Next to the office in which I work I can see the Bank of England and the Royal Exchange. A short walk in one direction is St Paul’s Cathedral, and in the other, The Monument to the Great Fire of London. These are spectacular sights that I have long ignored.

However, once I scampered across their rooftops, climbed their towers, or zip-lined into their courtyards, I started looking at them with new eyes. Details I never noticed before jumped out at me; an inscription or statue, a fountain or balustrade. It’s testament to the overlooked talents of Ubisoft’s art team, who beautifully recreated the magnificent work of the city’s architects.

As I uncovered each location in the game I wanted to visit it for real. And I was tempted to start running Assassin’s Creed Tours of London from my very own Rook carriage.

Even a place like Waterloo Station – which, as with the other stations in the game is not particularly accurately recreated – offers food for thought. As I commute home and stand waiting for a train, I look up at its arched roof and recall my exploits as the Frye twins. I look at the glass and metal, and can picture its construction. It seems I now find rivets riveting. Thanks, Ubisoft.