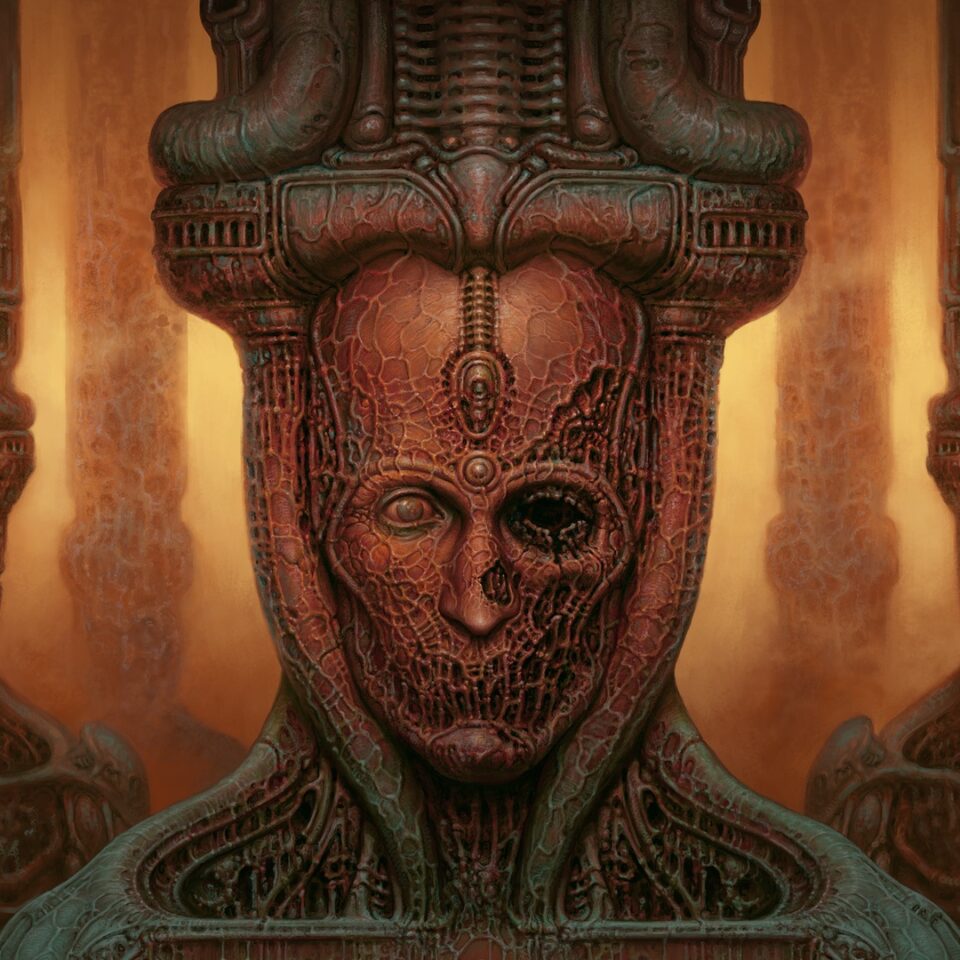 Eeurrrgh. That is the mood, and indeed the mission, of Scorn, the debut game from Ebb Software.

It is set in a fortress, on a murky planet, and the architecture is modelled on the designs of H.R. Giger, who created the biomechanical beast that hissed at the heart of Alien. That means we get corridors that look like ribcages and doorways that ooze. What’s more, we get nothing but. In Alien: Isolation, that same slithering look was never allowed to reach full bloom; it was blocked off by the human hallways of a space station, fridge-white and free of menace. (Until, that is, menace came rattling through the vents.) In Scorn the dankness is unadulterated. It radiates through every square foot, keeping the Giger counter clicking. A warning: extended periods of play may leave you craving a hot shower.

The action is in first person, which is not to say that you are a person. Not a whole one, at least – more a grey and crumbling personoid. At the outset, you are ossified and fused to the floor, and, while you do break free, you never quite brush off the extra bones. Think Gollum crossed with a lobster, and you are almost there. After waking in this mazy stronghold, furnished with strange mechanisms, cages, and dripping shadows, you have a simple mission: escape. In other words, Ebb Software gives us an icky Ico. Hence, early on, the sarcophagi that line a wall, only for one to be cracked open, and for a frail form to be winkled out like an oyster. It’s a grotesque parody of the opening scene in Fumito Ueda’s game, in which a young boy is also immured and set free.

The crucial difference being that, whereas he was liberated by the machinery of fate – a lucky tremor shook his coffin loose – the poor thing in Scorn is shucked and plucked by the machinery of God knows what. Pincers on the end of robotic arms, shunting pistons, writhing generators: all triggered not by karma or cosmic design but by you, plunging your fingers into a fibrous control panel, with a resounding squelch. And why? In order to thrust the creature’s arm (either attached or, depending on your patience, hacked off) into a lock, which opens a door. Obviously. Credit to Ebb Software for honouring not just Giger’s aesthetic but the obsession that feeds it: namely, the gnawing covenant between anatomy and machine, with its hints of bodily transcendence and spiritual doom.

Most of Scorn is taken up with puzzles of the vast environmental kind that have you snooping through connected chambers in service of some hulking central contraption. And our leading shuffler has a heavy tread. In games like Prince of Persia: The Sands of Time and Tomb Raider: Underworld, this sort of puzzle design would take a lighter tone (gates powered by waterfalls, great clocks hewn into the sides of cliffs), and solving them was a breeze. The Prince and Ms Croft defied the systems that tried to entrap them – the gush of time and tide – with the aid of regal acrobatics and magnetised grappling hooks. Not so in Scorn, whose exploration proceeds at a lumbering pace, and may come with a greater cost. Given that we begin by tearing ourselves free of the labyrinth, as if we had grown from it like a tumour, such defiance takes on a self-destructive tone; escape is an operation we may not survive.

There is a gratifying challenge here, requiring keen eyes and a certain degree of sufferance. Other flavours of conundrum include: cylindrical keys, which must be encoded with accretions of rock; power cores, resembling glowing tanks of milk, that must be plugged into towers; and tentacular remote controls that wriggle their signals into the air. But there isn’t a sense of the beings – doubtless a cheerful and charming bunch, adept at dinner parties – who forged these tools. In Alien, this absence merely stoked the awe you felt as the crew of the Nostromo roped down into that derelict ship, further evidence that Giger’s designs are at their most potent when they clash with the man-made. Ebb Software is enamoured with the look for its own sake, and doesn’t squeeze any further meaning from it, so the mystery burns away in the hostile atmosphere.

Still, what atmosphere! The art director, Lazar Mesaroš, serves up a stew of weirdness. Behold: fists of stone, lavender deserts strewn with gothic rubble, and egg-shaped lumps scarfed in dry ice. It’s exactly the sort of thing that deserves a pair of headphones, a dark room, and an undernourished social calendar. Scorn is a lonely game, and it left me with an acute longing for Lieutenant Ripley to roll up with a flamethrower and roast its chilly gloom.

This, of course, is unlikely to be something that the publisher, Kepler Interactive, would put in the trailers: “Play Scorn, feel forlorn!” Nor is it a game that you would glimpse during one of those Wholesome Direct showcases, rubbing shoulders with the likes of Lake and Ooblets. (Though, I would relish the spectacle.) Nonetheless, we need games like this: closely fretted odes to a prevailing fixation. That was exactly what Jonathan Blow delivered with The Witness, with its unbroken lines of inquiry into the nature of knowledge, and it is what Ebb Software has given us here. That being said, I’m not quite sure that games like this need combat, and I could have done without the pallid blobs – ooblets gone very, very wrong – that quiver through its passageways. However, if you have always wished to wield a selection of skeletal weapons, like the gristly pistol in David Cronenberg’s eXistenZ, this is the game for you.

It is also the game for you if you have a taste for tightly paced science fiction that fights shy of horror but keeps its nose on the spoor of darkness. Emotionally, it doesn’t get to the heart of any real darkness, but it’s caked in enough shadow and filled with enough stuff that pumps and bleeds that you feel pleasantly drained at its close. All of which makes this an intriguing proposition and a tough sell, but I’ll try and make the case: Play Scorn, feel worn!