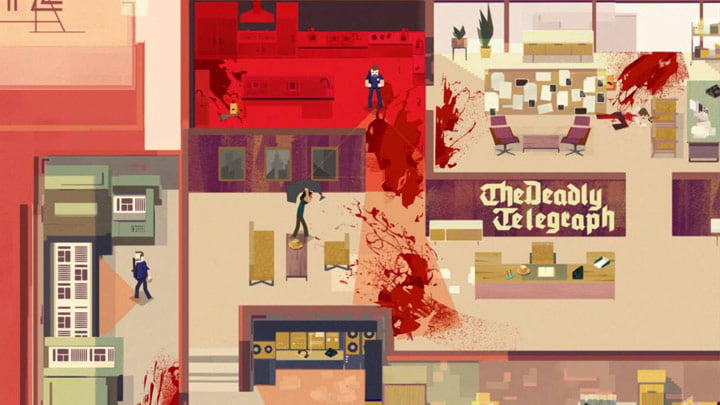 There was an E-mail in my inbox from the publisher behind Serial Cleaner, asking me, “Have you ever wanted to be Winston Wolfe from Pulp Fiction?”

My initial response was a ‘no’, but only because I’d never really thought about it. It’s an odd role to want to step into, but it’s a vivid reference point and one that’s cut a fresh yet familiar figure.

You’re on clean-up duty; that much should be clear. You’re the chap that’s brought in to erase the mess. A wash vac for the soaked-in puddles of claret, some plastic body bags to swindle the cadavers, and a moustache that could kill. You’re a professional.

More than just a professional, you seem to have brass balls, because you’re cleaning up the fall-out while the police are still working the crime scene. What follows is a tough mix of solid line-of-sight stealth and challenging clean-up duties. Sleuthing past the watchful eyes of the boys in blue, you’ll start slurping up blood-spatter, keen to avoid making too much noise with your vac. As is often the case with good stealth games, the one thing that will be your undoing a lot of the time is your own impatience. Guard patterns stay fixed, so you can mark down a decent game-plan on-the-fly.

It’s tempting to dash this game plan on the rocks, however, when you’ve got a corpse slung over your shoulder, the carcass of the crime-scene has been picked clean of evidence, and all that separates you from success is a giddy sprint to your getaway van. But the police run faster than you. In a nice touch, you’ll have to break line-of-sight with corners and hope to conceal yourself in a hiding place – trailers, little shacks – before they catch sight of you again. There’s a lovely cat-and-mouse feel to it that swings richly rewarding one way, and punishing with a thump the other.

Randomised clutter means bodies and evidence play musical chairs when you hit restart. Sometimes this is brilliant, because that lurking stiff is now mere feet away from you; other times it can be rough because things overlap – a corpse can obscure a piece of evidence, for instance – and make you fumble about long enough to get spotted. As the game is still in early access, this issue may yet be addressed.

It bolsters Serial Cleaner’s appeal that it is a joy to behold. The rural, rustic tones of autumnal ‘70s America (or America in the fall, if you’re a native) set ablaze with coppers and auburn, and flecked with nauseating crimson, is cooled by the faded green of fir trees and the soft shadows they cast. The top-down perspective is perfect for soaking in these tiny details as well, giving you ample space to plan and manoeuvre while enjoying the canvas.

A long time ago, at the post-mission screen in Hitman: Blood Money, I remember flippantly frittering copious amounts of cash to tidy up the swathe of carnage I’d cut through a vineyard in Chile. Serial Cleaner pulls a fascinating reversal in making you the cypher working behind the scenes to ensure a murderer goes free. Playing Serial Cleaner is like hitting rewind on the crackling VHS tape of Hotline Miami and watching it play out in reverse; instead of painting rooms with violence, you’re scrubbing them clean, shifting from the neon and synth of the ’80s to the funk and swagger of the ’70s.

The game is coming along nicely, and is scheduled for release “early 2017” – with no fixed date. It’ll set you back £7 to jump in to early access, and it’s absolutely worth that. Spring cleaning anyone?