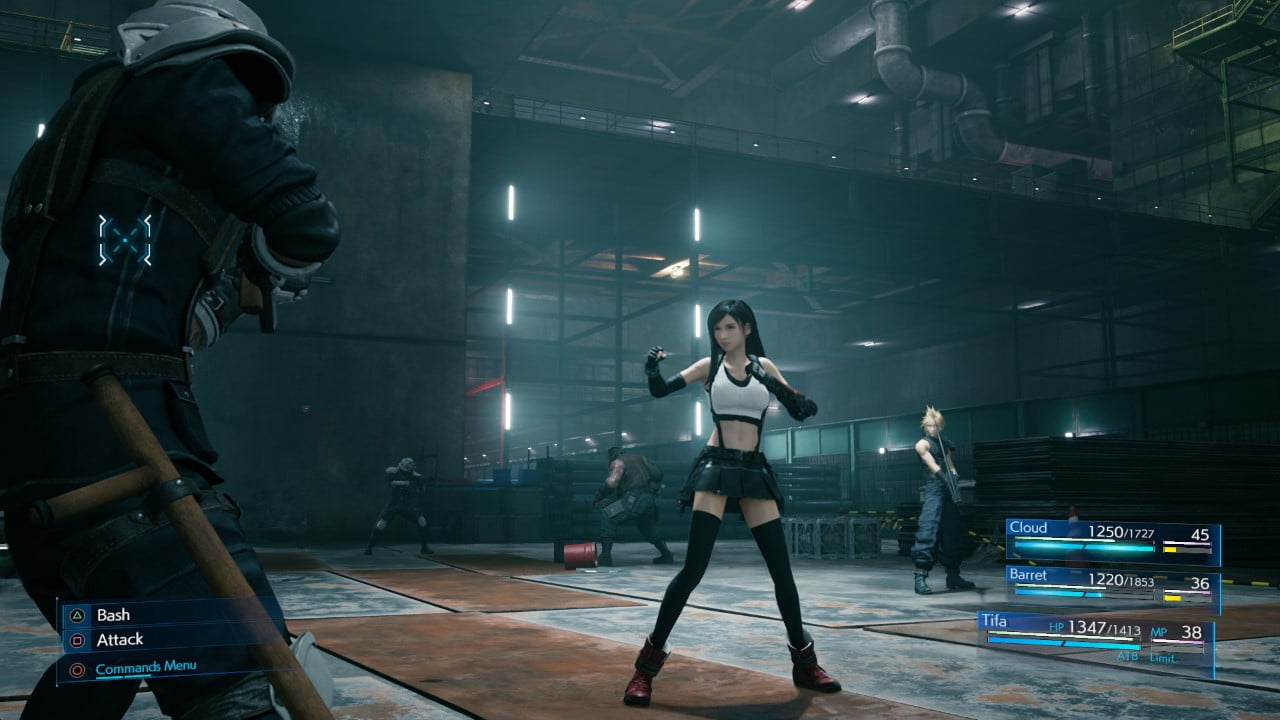 One of the most common party selections in the original game probably won’t be a viable option in the Final Fantasy VII Remake.

Remember in the original Final Fantasy VII, when you finally escape from Midgar, and you have to choose who your travelling party will be for the first time? Up to that point, the linear narrative had determined who Cloud was paired with: Barret for the first bombing mission; Barret and Tifa for the second; Aerith for Wall Market; Aerith and Tifa for the train graveyard; Tifa and Barret for the Shinra tower.

Then you climb over the wall, flee Midgar, and venture into the open world for the first time. You have two slots to fill, but four companions to choose: Barret, Tifa, Aerith, and Red XIII.

Most people probably choose Tifa and Aerith. I mean, I don’t have any statistics to back that up, but given the developers put in a line from Barret that says he “thought you’d do that” (and Tifa and Aerith call it an “unexpected combination” if you do the opposite), it seems pretty likely. Plus everyone wants to protect Aerith and Tifa is a badass, so who isn’t picking that combination?

But in the Final Fantasy VII Remake, you probably won’t be able to use that party configuration. (Not that we’ll be able to reach that point when the first chapter of the game releases, anyway. That all takes place in Midgar.)

Why won’t that party combination work? Because of the adjustments to the Final Fantasy VII Remake combat system.

In our preview, taken directly from a hands-on gameplay session at E3, we touched on how the combat system works in the Final Fantasy VII Remake, and how it differs to the original. The key difference is the combination of action and menu-based, tactical commands.

In brief: You attack in realtime, but you need ATB (Active Time Battle) charges to perform any other actions, like casting spells or using items. You fill up your ATB charges by successfully landing standard attacks on enemies, then you can spend your ATB charges on abilities, magic, etc.

So far, so straightforward. But there are two different types of standard attack, based on who you’re controlling. Cloud, and (most of) the other characters in the game use melee attacks. In his case, it’s a big old sword; Tifa users her firsts; Aerith has a staff; Cid a spear, and so on. The other type of standard attack, used by Barret, is ranged. He has a gun where his arm should be. (And later in the game you can optionally add Vincent, who also uses a gun, to the party. But at this stage, we’re not even sure if he’s going to appear in the Final Fantasy VII Remake as he’s not central to the main storyline.)

In the original game, this meant you could position Barret (and/or Vincent) on the back row. They were still able to deal the same amount of damage, but the damage they received would be cut in half. If you put a melee character on the back row they would only deal half the damage, because they, erm, had to travel further to hit enemies? We’re not sure. Anyway, the logic was that the back row was the safer position tactically, but Barret (and Vincent) could negate the offensive limitation with their ranged weapon.

The other component of ranged weapons in the original Final Fantasy VII was the ability to attack flying enemies. Barret (and Vincent) could fire at any enemy, regardless of where they happened to be on the battlefield, but Cloud et al would receive a “can’t reach!” error message if they tried to melee attack an aloft aerial enemy. Magical attacks, limit breaks, and summons were all still viable, but physical attacks were rendered useless.

We’ve already seen this behaviour in the hands-on demo of the Final Fantasy VII Remake. At certain points in the Guard Scorpion boss battle, it leaps into the air and onto a distant wall, to engage you with its missiles and laser. At these points, Barret is able to continue to attack the robot with his gun arm, but Cloud is no longer able to perform standard attacks.

If you’ve got ATB charges, of course, you can still make Cloud useful. He can cast offensive spells on the Guard Scorpion at range, or otherwise, spend his ATB charges healing himself or Barret. But if he runs out of ATB charges and the scorpion is still on the far wall? He’s effectively neutralised. Cloud is unable to replenish his ATB charges by attacking the Guard Scorpion – the only enemy on the field at the time – and is reduced to standing around like a spare part while Barret does all the work. Eventually, the Guard Scorpion does come back down, but we found Cloud had an empty ATB gauge and no way to fill it on more than one occasion.

Now think back to that party most of us chose upon leaving Midgar. Cloud. Tifa. Aerith. They all use physical attacks.

Now remember that a number of enemy types, particularly in the open world, are flying enemies. Unlike the Guard Scorpion, some of them never come down. If you spend all your accumulated ATB charges on offensive magic, but don’t bring the distant enemies down? There’s literally no way for a party of melee-attacking characters to replenish their ATB charges, which would enable them to cast more offensive spells or abilities.

The new combat system, the clever mix of action and strategy (that blends Final Fantasy XV’s hack and slash with Fallout 4’s V.A.T.S) is excellent. It was a key area of concern for fans of Final Fantasy VII, but in that demo, it put a lot of fears to rest. But unless there’s some concession for ATB recharging when you can’t make ranged attacks on flying enemies, it will be practically impossible to play through the Final Fantasy VII Remake without having Barret in your party.

(Or Vincent, if you prefer the emo vampire, you big weirdo.)