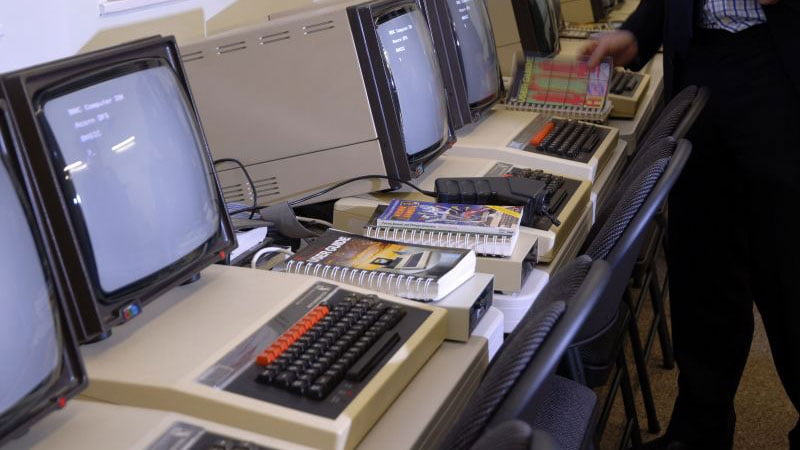 If you bring up the subject of educational video games you’re likely going to get a resounding groan – I’m often the one that does the groaning.

I remember, when I was in my first school, we had an Acorn computer. It sat near the window, taunting rays of sun streaking across its beige bonnet. Playing on that thing was never a continuation of the lesson; it was an escape.

As I got older, defending video games for their ability to educate with the kind of nervous inner fear that I’m sure anyone who has defended our hobby has felt inside them. It’s like a secret doubt, a worry that we are doing precisely what the village elders said we always were: wasting our time. And so it was that I never learnt my times tables from the Acorn; I learnt them through staring at a blackboard.

But I can tell you that the only reason I know about the Strategic Arms Limitation Talks is from playing Metal Gear Solid, and from its sequel Snake Eater, I learnt who the first man in space was. From playing Virginia, I was inspired to learn about Lev Kuleshov and the Soviet filmmakers of the early 20th century. I remember learning about the Coriolis effect on projectile trajectory playing Call of Duty 4.

The trouble with all of these things is that teachers and schools can’t harness them to great effect in the classroom. (I myself can hardly harness my knowledge of the Coriolis effect, because I don’t see myself picking up a sniper rifle – never say never, I suppose). If learning is like a flame, then education seeks to ignite a controlled fire in the minds of students; video games are, at present, an untamed forest fire.

Despite the grumbles and the tacky-corporate ‘edutainment’ feel that’s often draped over the topic like a cheap suit, there is something here, a reason why the desire persists: games are appealing to children, and they invite participation. Classrooms crave participation.

But there are other, more malleable ways that games, and the gaming industry, can contribute. As part of London Tech Week, Wargaming held a presentation, in partnership with Google, in which Tracy Spaight, the director of Wargaming’s special project division spoke on some of the ways the company is interested in mingling games with education.

Starting in 1998, with turn-based and real-time strategy games like Massive Assault and Order of War, Wargaming honed its niche skills to masterful effect with World of Tanks in 2010 – with successful branch-offs from there in World of Warplanes and World of Warships. The intersection between the people that play these games, and those that are interested in the history behind them, is one aspect that Wargaming looks to explore. Perhaps more intriguing, however, is the use of the tech and resources at the company’s disposal in inspiring younger people to develop these interests.

This desire is front-and-centre for Spaight. “As a video game company I think we’re very well situated for reaching younger audiences. People that grew up using the internet, smart phones, they’re often difficult for museums to interact with or engage with.”

Spaight then goes on to elaborate on how video gaming mediums may be better suited for engaging younger students. “They’re what author Mark Prensky called ‘digital natives’: they just engage with information a bit differently, and using these new storytelling mediums like 360 VR and AR, allows us to bring history alive in a way that speaks to these audiences very well.”

It’s an intriguing proposition that shifts the emphasis from games to learning. Instead of trying to infuse games with an educational slant, perhaps a better way would be to infuse education with a gaming slant.

It’s an idea made powerful with the proliferation of virtual reality technology. Teaming with Google’s new initiative, Google Arts & Culture, Wargaming has delivered something that looks not only to bring an interactive entertainment into learning, but to widen access to museums and exhibitions across the globe. The virtual tour of the HMS Cavalier, carried out with a partnership between The Historic Dockyard Chatham and World of Warships, is the most recent example in Wargaming’s mission.

It’s a mission that’s been on-going for a few years now. “In 2015 we did ‘virtually inside the tank’ with our partner Google at that time, and we were one of the early projects that rolled out on Google cardboard,” says Spaight, highlighting not just Wargaming’s versatility – from Tanks to Ships and Planes – but its relationship with one of the most powerful tech companies on earth.

It turns out there are distinct advantages of imbuing a little bit of video game logic to the learning process. “The Bovington tank museum will not let you get inside one of the tanks and drive them around or fire the armament, and I just thought this was such a drawback. And we solved that problem by creating a 360 inside tour of the tanks so that we could put you in the driver’s seat virtually and you can see what all the different levers were and what things did.”

There are also huge potential gains for museum and research industries in this relationship, in partnering with Spaight’s division within Wargaming, an extremely rare, real-world example of Google’s 80/20 principle.

“‘Special projects’ – we’re sort of like the department of ‘other stuff’ – we do the out-of-the-box sort of things, from archaeological digs to helping recover vehicles that were lost on the eastern front or other places. In 2013 we recovered a Dornier 17 bomber with the RAF museum … and we were involved in building the ‘Wargaming interpretation zone’, where you can go and see, virtually, what a Dornier 17 looked like before it was all crashed and covered in barnacles.”

The gaming industry right now is worth $101.1bn, and is predicted to be worth $128.5bn by the end of 2020 (numbers as per UKIE). With an industry growing with motion-blur speed and an independent company like Wargaming – a relatively small one in comparison to giants like EA, Ubisoft, and Square Enix – contributing as extensively as it has done in a niche area, imagine the possibilities that lie in other companies following in this example.

Perhaps the two greatest gifts this embrace of gaming technology can give are immortality and access. Kids in San Francisco, who might not otherwise be able to make the trip across the world to a dockyard in London, can experience the rich history for themselves where they are. ‘Democratising access’ is the phrase that Spaight used more than once during the presentation.

Then there’s a matter of legacy. HMS Cavalier is a Royal Navy C-class destroyer. Built in 1944, she reinforced and escorted a convoy out of dangerous Russian waters under fire from enemy aircraft and U-boats – an action that earned a battle honour. She served in the Battle of Surabaya in the Far East providing naval gunfire support. Decommissioned in 1972, she is now the last surviving British destroyer of World War II to remain in the United Kingdom. And she’s dying.

Constant work is required to keep ships in good condition: they float in water that erodes hulls; they spring leaks; they require mechanical refurbishment inside and out. HMS Cavalier won’t be here forever, but she could live on indefinitely in virtual code, allowing future generations to carry on learning long after she’s gone.